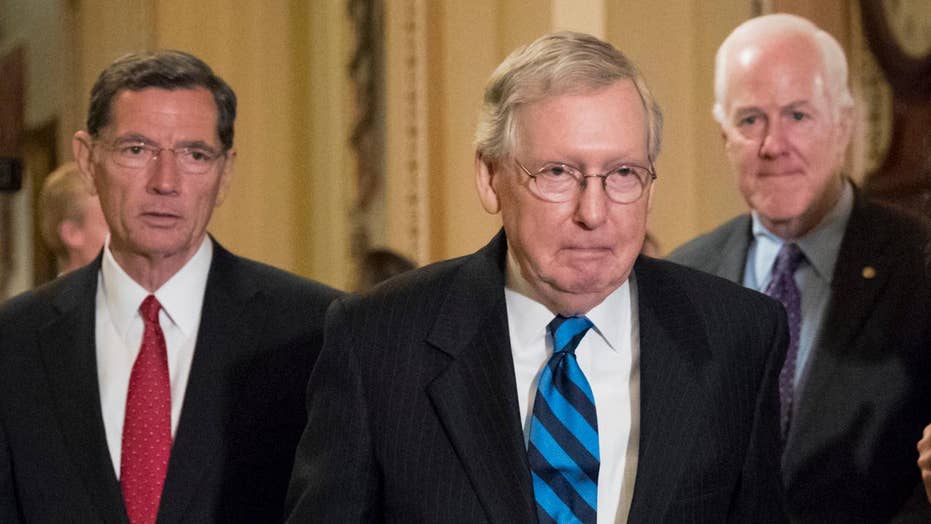 Senate Majority Leader McConnell is rolling out the new plan

Senators met behind closed doors Thursday to discuss the future of the Republicans’ plan to replace ObamaCare and to unveil a few changes to the bill.

While Senate Republicans are hoping to uphold a years-long promise of repealing former President Barack Obama’s health care overhaul, the GOP plan still remains in jeopardy because of divisions within the party. But President Donald Trump said Wednesday that he will be “very angry” should the Senate fail to pass a new bill.

The Congressional Budget Office is expected to release a score on this new proposal next week.

Here’s a rundown of what changed in the legislation.

The new bill would provide an additional $70 billion to states to use for their own innovative health care reforms. That money would help bring down premiums through cost-sharing, according to the proposal.

SENATE HEALTH CARE BILL: HOW IS IT DIFFERENT FROM THE HOUSE’S LEGISLATION?

The $70 billion is in addition to the $112 billion already allocated in the original legislation.

While the draft bill does not change the steep cuts in funding to Medicaid, it does give states more flexibility for spending in the event of a public health emergency.

States are also able to apply for waivers for community-based services for disabled and aged populations, according to the proposal.

The new Senate health care bill would create a fund for health insurers that covers high-risk patients who have enrolled in plans through the Affordable Care Act’s Individual Exchange.

The bill also tentatively includes a proposal from Sen. Ted Cruz, R-Texas, which is not widely liked among more moderate Republicans.

Those opposed to Cruz’s proposal argue that it would make policies excessively costly for people with serious illnesses because healthy people would flock toward the cheaper coverage.

The original legislation allocated $2 billion in funding to states for substance abuse and mental health treatments; the new proposal is much higher.

To help pay for the additional spending in this draft, the measure would retain three tax increases ObamaCare slapped on higher-earning people to help finance its expansion of coverage.

Under the current statute, families earning more than $250,000 annually got a 3.8-percent boost on their investment income tax and a 0.9-percent increase in their payroll tax. Obama also imposed a new tax on the salaries of high-paid insurance executives.

Will the changes be enough?

Sen. Bob Corker, R-Tenn., applauded how “Senate leadership has taken input as they worked to craft this legislation.”

“I am encouraged by the direction of the bill and am hopeful the final product will be one that works better for the American people than what is in place today,” Corker, who plans to support the procession of the legislation, said Thursday afternoon.

"I don’t know that this is better than Obamacare."

But Sen. Jeff Flake, R-Ariz., told Fox News as he left the afternoon’s closed-door meeting that he is still “digesting” the legislation. Flake said he wasn’t ready to vote on a motion to proceed the legislation at this time.

“The new Republican TrumpCare bill is every bit as mean as the old one,” Senate Minority Leader Chuck Schumer, D-N.Y., said Thursday. It’s the provision that allows for scanty coverage that makes the bill “even meaner,” he said.

Kentucky Sen. Rand Paul said Thursday morning that he could not support a health care bill that doesn’t fully repeal ObamaCare. The Senate’s plan creates a $200 billion “bailout superfund” for insurers which will “subsidize the death spiral,” the Republican senator told Fox & Friends.

“I don’t know that this is better than ObamaCare,” Paul said.

Despite additional funds to fight the opioid epidemic, Portman's spokesperson said he will review the new bill and CBO score before making his decision.

However, White said his organization — a nonprofit health care advocacy group which has advised many senators on the state of the health insurance market recently — has “deep concerns” regarding the Cruz amendment and its implementation.

“At first glance, it does not appear this provision uses a unified risk pool, which risks segregating the healthy from the sick, creating an unbalanced market and potentially driving up premiums for those with greater health care needs,” he said. “While the additional funding provided to mitigate some of this risk is positive, it will likely prove insufficient.”

The conservative nonprofit Heritage Action announced that it would review the revised legislation, but its chief executive officer Michael Needham warned that “significant portions of the Republican Party have no intention of actually repealing ObamaCare despite campaigning on that objective for years.”

“Over the past two weeks, conservatives have rightly fought to interject additional consumer choice and competition into an otherwise deteriorating market,” Needham said. “It is encouraging to see some of those concepts being considered by the Senate Republican Conference.”