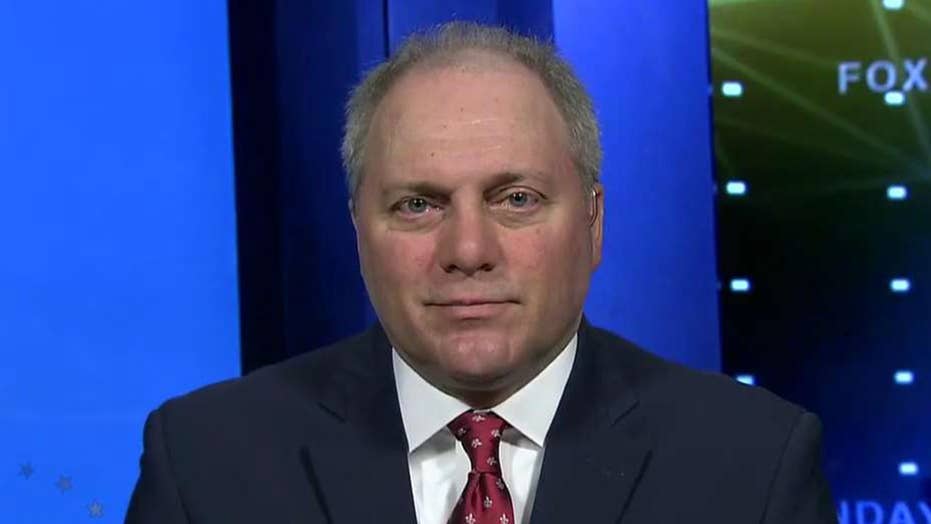 Can a divided government bring an end to the partial shutdown? Insight from House Majority Whip Steve Scalise.

House Majority Whip Steve Scalise, R-La., told "Fox News Sunday" that the ongoing partial federal government shutdown could end in a matter of hours -- if Democrats are willing to take their own advice from 2006.

"If the Senate’s got a different way and a better way to approach border security, they ought to put that plan on the table. Chuck Schumer was for this in 2006," Scalise said. "I’d be curious to know what changed. Is it just that Donald Trump’s the one now requesting it? But if he’s got a better way to keep this country safe, I think it’s incumbent upon him to show the American people what that plan is."

In 2006, top Democrats -- including Schumer and then-Sen. Barack Obama -- backed the Secure Fence Act of 2006, which Obama said at the time would allow for "better fences and better security along our borders” and would “help stem some of the tide of illegal immigration in this country.”

The White House has cited the Secure Fence Act, which mandated the installation of fencing along 700 miles of the southern border, as one of the legal justifications for building a wall to curb illegal immigration.

However, in 2007, congressional Democrats amended the law to exempt the federal government from having to build the fencing if it was not the "most appropriate" method of ensuring border security, and the legislation still requires the White House to separately obtain funding from Congress.

Scalise charged that Democratic leaders are now "afraid of the radical left base that wants open borders," and are insisting on maintaining the partial government shutdown over that funding because of political expediency.

The Louisiana Republican noted that while many immigrants are "good people," like Fiji-born 33-year-old California police officer Ronil Singh, more is needed to block or immediately deport "bad people" -- like Gustavo Perez Arriaga, who is accused of murdering Singh the day after Christmas.

Former FBI assistant director Steve Pomerantz says that law enforcement is at the greatest risk of coming into contact with illegal immigrants who are serial criminals.

DEMOCRATS AND THE BORDER: WHAT THEY DON'T WANT YOU TO KNOW

Fox News has learned that, behind the scenes, several senators this weekend are discussing a new potential compromise to end the ongoing partial federal government shutdown. One bipartisan proposal is to provide $5.7 billion in funding for the border wall, as well as a congressional reauthorization of the Obama-era Deferred Action for Childhood Arrivals (DACA) program for those brought to the U.S. illegally as children, along with some other immigration provisions.

There has also been talk about a special allowance for some classes of Central American refugees to be granted a more robust asylum status.

Giuliani asserted that Singh's death was "absolutely" preventable, and sharply criticized Democrats for opposing the stalled Criminal Alien Gang Member Removal Act in 2017. The bill would have given authorities the ability to take immigration enforcement action against suspected gang members even if they have not been convicted of a crime. 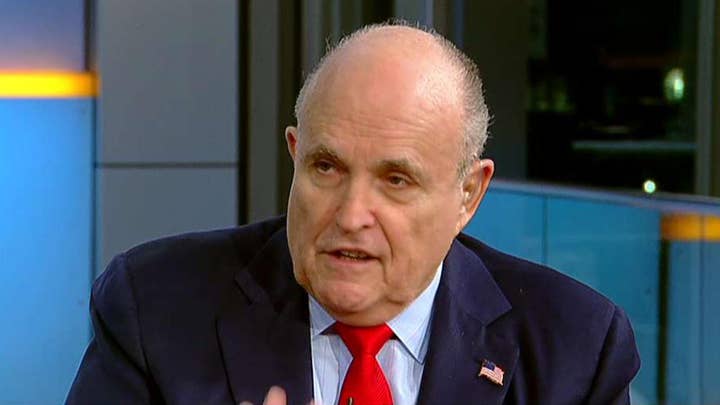 Scalise added that when Democrats retake the House as the new Congress is seated Jan. 3, they will need to work with the White House on a variety of other issues besides border security.

"Let’s focus on actually getting our budget balanced again and let’s talk about infrastructure and a lot of other issues we can work on in the New Year," he continued. "The Democrats have to be willing to work with this president. You’ve seen a lot of focus on what they’re going to do in terms of what the president calls 'presidential harassment.' That’s not what this country wants."

Also on "Fox News Sunday," Mohamed A. El-Erian, the chief economic adviser at European mega-financial services company Allianz, downplayed the risk of a recession despite the recent wild stock market fluctuations amid the government shutdown.

"You would need either a major policy mistake or a massive market accident to push us into recession, but we will slow down unless we build on the pro-growth policies -- and I think the reference to infrastructure is an important one that you can get both parties to support, and an infrastructure effort would increase productivity," El-Erian said.

He added that the "most likely outcome" this year is that the economy will "remain strong, growing at 2 and a half to 3 percent," with wages "continuing to rise at 3 percent or north of that, and the economy on a stand-alone basis will look fine. But because of what’s happening in the rest of the world, because liquidity conditions have changed, markets will remain volatile."