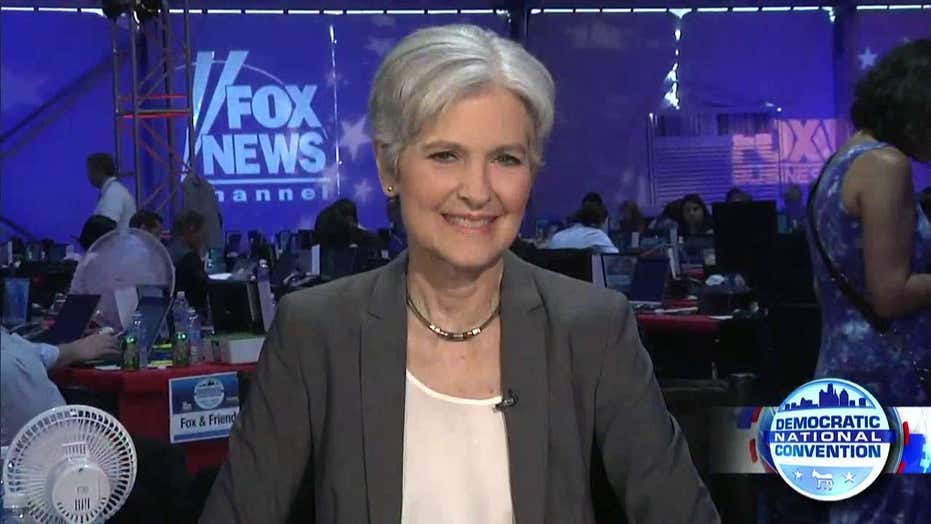 PHILADELPHIA – While Bernie Sanders supporters turned out in droves to the Democratic convention, many are chanting another name in the streets of Philadelphia as the senator steps back into the party fold: Jill Stein.

All but an afterthought for much of the primary season, the Green Party candidate's political stock has risen in recent days as Sanders supporters search for an alternative. Stein herself has maintained a presence on the sidelines of the Philadelphia chaos, even marching with protesters Tuesday after Hillary Clinton was nominated.

"Those who are in tears, whose hearts have been broken, I’m going [to rallies] to really reassure them that their work has not been in vain," Stein told FoxNews.com on Wednesday.

But she's not shy about inviting those supporters to join her cause.

“We are going to continue this movement,” Stein told a cheering crowd near City Hall Tuesday. She said her campaign was ready to embrace Sanders’ supporters, adding, “Whatever happens, you know my campaign is here.”

Stein was surrounded by Bernie backers and cheering crowds before being escorted out of the area by security. For many in the Sanders crowd, Stein is a far more natural fit than Donald Trump, the Republican nominee also making a play for disaffected Sanders voters.

Amanda Sullivan of Weston, Fla., sweated it out on a blistering 97-degree day to hold her “Bern or Jill but never Hill!” sign as she joined the 1,000-deep group of demonstrators at City Hall earlier this week.

Sullivan told FoxNews.com that she’s frustrated by the Democratic Party’s exclusion of some in the party and says she cannot vote for Clinton in a November matchup.

The Democratic Party faced a nasty scandal heading into the national convention in Philadelphia over leaked DNC emails that indicated a pro-Clinton bias during the primary race.

As a result, Rep. Debbie Wasserman Schultz – the chairwoman of the DNC – resigned Sunday.

Despite pleas from Sanders himself for party unity, though, several of his supporters are vowing to back a non-Clinton choice like Stein.

Leading into the convention, Stein's popular support was relatively low. In a CNN/ORC International poll conducted July 22-24 of 882 registered voters, Stein only received 3 percent of the votes. Donald Trump led with 44 percent, Clinton had 39 percent and the Libertarian Party’s Gary Johnson came in at 9 percent.

But some say the tides might start to turn in Stein’s favor after Philly.

On Tuesday, shortly after Clinton became the first woman to be nominated for president by a major political party, a group of Sanders delegates and supporters walked out of the Wells Fargo convention site. Some taped their mouths shut while others broke out in song.

Some Sanders delegates told media members they were shut down by the DNC over an apparently incorrect form when trying to put up another candidate for vice president.

Norman Solomon, leader of the Bernie Delegates Network, refused to say which candidate they were talking about but bashed the DNC anyway.

Scott McLarty, national media coordinator for the Green Party, told FoxNews.com the jump in support to Stein from Sanders didn’t come as a complete surprise.

“A lot of us expected something like this to happen,” McLarty told FoxNews.com. “It’s a challenge. We want to accommodate them. The basic message is welcome home along with voting green.”

Naomi Craig of Westminster, Fla., says she feels abandoned by Democrats and will vote for Stein in the general election.

“I don’t think [the Democratic Party] is listening,” she told FoxNews.com. Craig voted for Stein in 2012 and says Green Party views on foreign policy are a sticking point.

Peter Swanson, part of the group Students for Bernie, came from North Carolina to take part in the protest and said, “I would sooner vote for Jill Stein in the Green Party.”

Leonardo Watson of Georgia told FoxNews.com that while not every aspect of the Green Party syncs with his own views, it’s a better match than Clinton.

“Look, Clinton’s not an option. It’s not about party unity. It’s about standing up for yourself and what you believe in -- and right now, with Bernie out, that’s Jill Stein.”