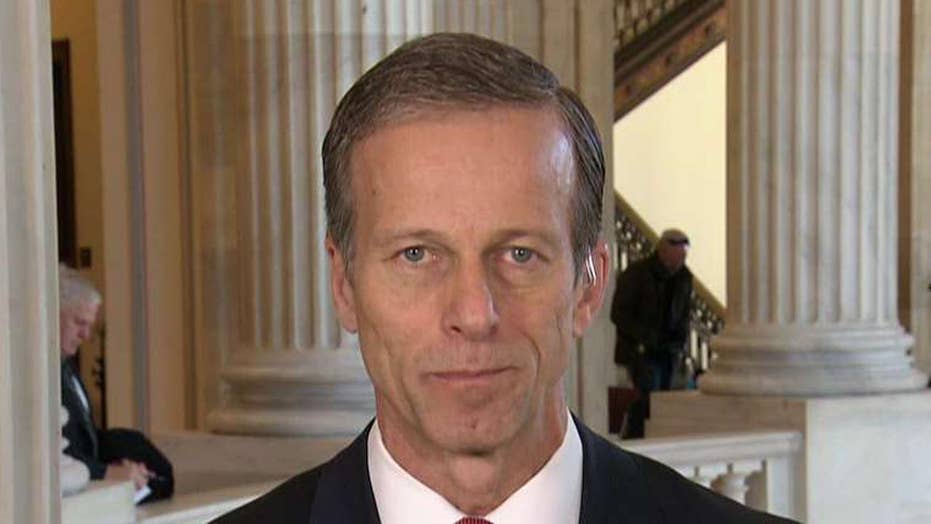 Can GOP health care bill get across Senate finish line?

As Senate Democrats float new options for complicating a vote on President Trump’s Supreme Court nominee, Republicans appear ready to return fire with a bomb of their own – a nuclear one.

Top Republican Sen. John Thune, of South Dakota, all but confirmed Wednesday that his party is willing to use what’s known as the “nuclear option,” to lower the vote threshold to confirm Judge Neil Gorsuch if Democrats try to filibuster.

“We will do what is necessary to confirm Judge Gorsuch on the Supreme Court, yes,” he told Fox News’ Shannon Bream on “America’s Newsroom,” when asked if they’d go that route.

Thune, who serves in the No. 3 position in Senate GOP leadership as chairman of the Senate Republican Conference, added that Democrats “have not laid a glove on him” in the hearings and predicted the judge would get an “affirmative” vote in the Senate.

The threat comes as Democrats not only threaten to filibuster but suggest he shouldn’t get a vote until the FBI completes its probe of possible links between Russia and Trump associates.

Senate Minority Leader Chuck Schumer, D-N.Y., and Sen. Elizabeth Warren, D-Mass., both called Tuesday for a postponement on any vote to confirm Gorsuch to the nation’s highest court.

“It is unseemly to be moving forward so fast on confirming a Supreme Court justice with a lifetime appointment while this big gray cloud of an FBI investigation hangs over the presidency,” Schumer said. “You can bet if the shoe were on the other foot and a Democratic president was under investigation by the FBI the Republicans would be howling at the moon about filling a Supreme Court seat in such circumstances."

Warren added on Twitter: “Neil Gorsuch is up for a lifetime appointment to the Supreme Court from a President whose campaign is under FBI investigation.”

Republicans panned the call as "ridiculous." But Democrats could still try and filibuster, requiring Gorsuch to garner 60 “yea” votes in the Senate. That's a high bar for Republicans, who have just 52 members in the Senate.

That's where the so-called "nuclear option" comes in. If majority Republicans change the threshold, Gorsuch could be approved with a simple majority of 51 votes.

The nuclear option was first used by Democrats for circuit court judicial appointments in 2013 and top Republicans – including President Trump – have indicated for weeks it’s a serious option in order to get Gorsuch on the court.

Republican Senate leaders so far have refrained from using the term – but their exasperated rhetoric shows they’re at least kicking the tires of a legislative Enola Gay.

“If Judge Gorsuch can’t achieve 60 votes in the Senate, could any judge appointed by a Republican president be approved with 60 or more votes in the Senate?” Senate Majority Leader Mitch McConnell, R-Ky., asked on Tuesday. “If they don’t find Gorsuch acceptable, are they taking the position the vacancy should never be filled? At all?”

McConnell hasn’t tipped his hand on strategy; however, he’s maintained in interviews that, one way or another, “the nominee will be confirmed.”

Sen. Lindsey Graham, R-S.C., meanwhile, lamented the increasing politicization of Supreme Court nominations and implored his Democratic colleagues to vote on the man – not the party of the president who nominated him.

“Here’s what I hope – that we turn around and go back to where we were, because what we’re doing is going to destroy the judiciary over time,” Graham said on Monday.

Supreme Court justices have faced more pushback from the opposition party in recent years. Antonin Scalia – whom Gorsuch would replace on the court following Scalia’s death in 2016 – was confirmed 98-0 and Anthony Kennedy had a tally of 97-0 in 1988. But the contentious Clarence Thomas hearing in 1991 produced a 52-48 split that just pushed Thomas over the finish line. Ruth Bader Ginsburg was confirmed 96-3 two years later and “yea” votes have largely dwindled ever since: Stephen Breyer, 87; John Roberts, 78; Samuel Alito, 58; Sonia Sotomayor, 68; Elena Kagan, 63.