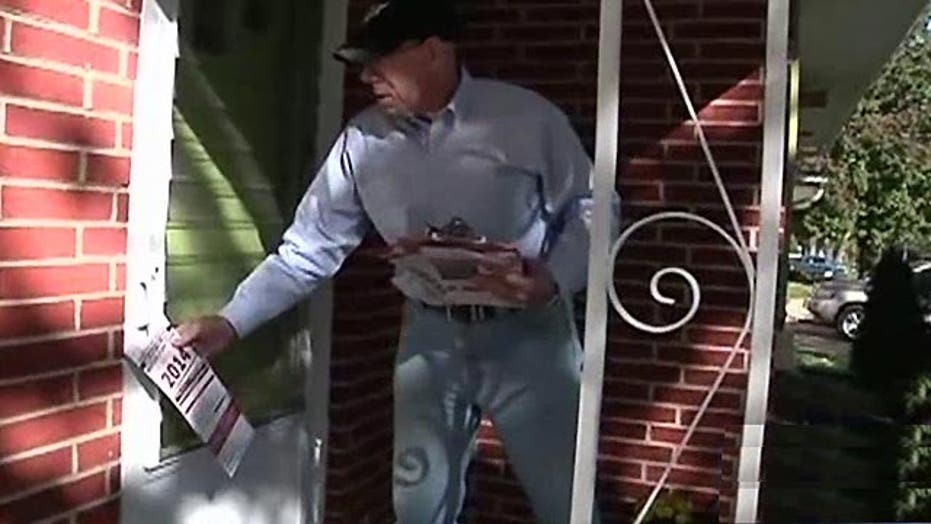 How are Dems, GOP stepping up their ground games?

Push for voters ahead of midterms

The candidates have made their pitches. They’ve sparred on the debate stage. They’ve blanketed the airwaves.

Two weeks before Election Day, it’s all about the ground game now.

In battleground Iowa, where the Senate race is one of several that could determine the balance of power in Congress, both parties are making a serious push to get out the vote in the final stretch of the 2014 campaign. The contest between Republican Joni Ernst and Democrat Bruce Braley is tight, with the Real Clear Politics average of recent polling showing Ernst up 2.5 points.

Democrats say they’re bringing in significantly more voters who sat out the 2010 midterm election. Early voting is underway, with nearly 200,000 ballots already cast – the stats show 42.5 percent of them are from Democrats, about 2 points ahead of Republicans.

But the GOP says it is surging.

At Republican National Committee headquarters in Washington, officials say they learned from a shellacking in 2012.

"One thing that's a lot different this time around than two years ago -- about 75 percent of the data that we are collecting out in the field is through one of our mobile canvassing apps, which means we are getting real-time information from the field back here," RNC National Field Director Matt Mason told Fox News.

In the "war room" at RNC headquarters, staffers are working 24/7, combing through that data -- plus analyzing social media trends, to micro-target and mobilize potential voters.

"We have to be very nimble, and planning is a big part of this, so we are able move in real time when we have things planned in advance," said Lori Brownlee, part of the RNC social media team. "We have creative that's ready, art that's ready, we have messages that we know are going to work based on what we're seeing and what we're testing."

A new Wall Street Journal-NBC News/Annenberg survey reveals voters likely to cast ballots in the midterm elections favor a Republican-led Congress over a Democratic one – 49-44 percent. And among all voters, the GOP has taken its first lead of this cycle. A Fox News poll released last week also showed, in a generic ballot test, likely voters prefer the Republican candidate over the Democrat in their House district by 45-42 percent. Likely voters also want to see Republicans win control of the Senate, 47-43 percent.

"Low-propensity" refers to voters who don’t often participate in elections.

Democrats hope their edge that delivered an Obama re-election victory in 2012 will still be there this time.

"You really need voters, not just to come out because they're excited to come out -- voters who you've identified otherwise wouldn't come out. That's the advantage that Democrats have. I'm not sure Republicans have that yet," Democratic strategist Chris Kofinis said.

But Kofinis acknowledges there is an enthusiasm gap, particularly in states where President Obama’s approval ratings are in the low 30’s. Recent polling consistently has shown that Republican voters are more interested in this election than Democratic voters.

"Republicans are more energized, Democrats are not,” Kofinis said. “And unless that closes in the coming weeks, that's gonna be a problem. Because at the end of the day, you can only bring out voters who want to come out.”

RNC Chairman Reince Priebus declared on “Fox News Sunday” his side now has the edge.

"We are winning on the ground,” Priebus said. “The Democrat advantage in Iowa is all but evaporating. And then in no other Senate state on the ground are we losing."