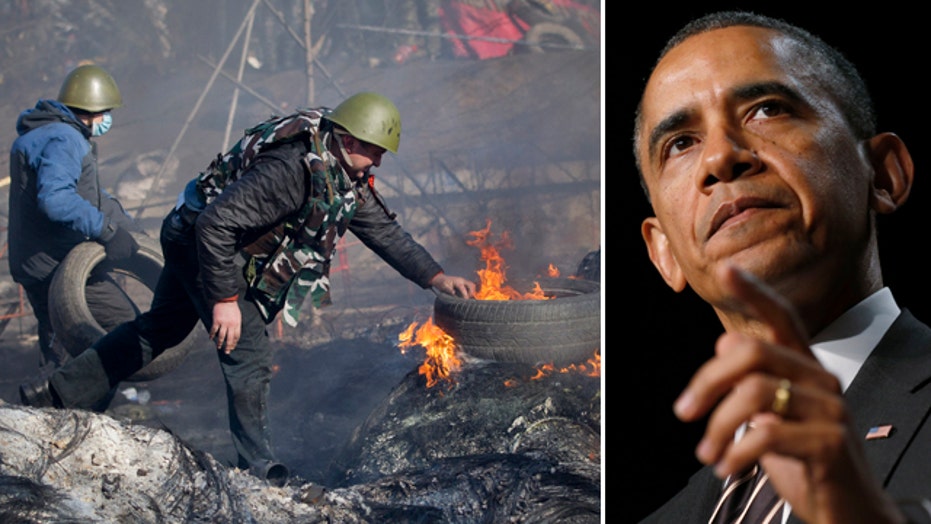 President Obama is being pressed to act quickly on the crisis in Ukraine amid accusations that his administration is straddling the fence, as dozens more people were killed Thursday in clashes on the streets of Kiev.

Amid reports that possible sanctions may be on the fast track, White House spokesman Josh Earnest said Thursday that "a range of options is being actively considered at the White House."

But so far, the public face of the administration's policy toward Ukraine has consisted mostly of phone calls with foreign leaders and public statements. John Bolton, former ambassador to the United Nations, suggested Obama's stance to date is far too mild considering what's at stake.

"He calls on the government not to resort to violence and then in the next sentence he calls on the demonstrators to be responsible. So he is showing moral equivalence," he told Fox News.

Bolton, a frequent Obama critic who served in the George W. Bush administration, accused the president of living "in a world of rhetoric and talk ... and what's going on in the Ukraine today is the struggle for power."

In a troubling sign, Pentagon spokesman Rear Adm. John Kirby said Thursday that the Ukrainian Ministry of Defense is refusing to take the phone calls of Defense Secretary Chuck Hagel, who repeatedly has tried to reach out to his counterpart since early last week.

"We are continuing our efforts to arrange for the secretary to communicate directly with Minister Lebedev, but so far, the Ministry of Defense has been unresponsive to our requests," Kirby said.

He said "it's pretty unusual" for Hagel not to have his call taken.

Vice President Biden, though, did speak Thursday with Ukrainian President Viktor Yanukovych. According to the White House, Biden "strongly condemned" the violence against the citizens of Ukraine and warned that the U.S. is prepared to sanction the officials responsible.

The White House, while ruling out military action, began Thursday to point its outrage squarely toward the Ukrainian government, blasting its security forces for "firing automatic weapons on their own people" and urging Yanukovych to "immediately withdraw his security forces" from downtown Kiev.

Secretary of State John Kerry also took a harsher tone than the administration has previously in a statement released late Thursday, saying the U.S. unequivocally condemns the violence against protesters and calling on Yanukovych "immediately" engage in serious talks with the opposition.

But as the administration continues to wade into the fray, the urgency is growing rapidly. With threats that the Ukraine government could soon call on the armed forces, the clashes have the potential to spiral into civil war if not mediated soon -- at the least, Vladimir Putin is poised to pull Ukraine ever closer into Russia's orbit.

At issue is a country whose population is deeply divided between Russia to the east, and Europe to the West. Many Ukrainians in the eastern and southern parts of the country still speak Russian, while those in the western part largely speak Ukrainian. Russian-speaking regions were Yanukovych's strongholds in the 2010 election.

These tensions have long simmered in the country of 45 million, but flared last November when Yanukovych abandoned an agreement with the European Union and, instead, struck a deal with Moscow. Putin's Russia agreed to give Ukraine a $15 billion bailout loan and cut the price of gas exports.

The deal allowed Moscow to tighten its influence over the former Soviet republic, as Putin tries to woo Ukraine into joining a customs union with two other ex-Soviet countries -- but it outraged opposition protesters who are now demanding Yanukovych's resignation. Fueling their anger is corruption in Ukraine and the country's ailing economy.

Along the way, Obama administration officials have pushed for aid to Ukraine while urging both sides to reach an accord. Vice President Biden called the Ukrainian president in early December urging him to meet with opposition leaders.

Kerry the next day called for "utmost restraint," while saying Ukrainian authorities "bear full responsibility" for the security of the people. "The United States stands with the people of Ukraine," he said.

Obama said a "peaceful transition" is still possible. But the next step is unclear.

In Brussels, the 28-nation European Union decided Thursday in an emergency meeting to impose sanctions against those behind the violence, including a travel ban and an asset freeze against some Ukrainian officials.

The Obama administration has not yet committed to sanctions, but several top lawmakers are urging that step -- provided sanctions target select individuals and not the country as a whole.

"The President should act now, without delay, before more are killed in the streets of Kiev and elsewhere in Ukraine," Rep. Ed Royce, R-Calif., chairman of the House Foreign Affairs Committee, said in a statement.