President Obama on Tuesday kicked off a big push to promote the government's $1 trillion health care overhaul, following a string of critical reports about missed deadlines and rising costs related to the legislation.

The president used a "tele-town hall" in a Washington suburb to tout the $250-per-person rebates that will soon be going out to seniors to help cover prescription drug costs. The rebates, set for distribution beginning Thursday, are one of the earliest provisions of the new law. Most of the major spending measures don't go into effect until 2014.

But with an election on the horizon and a rapid-fire sequence of domestic and international crises consuming the president's time and the public's attention, Obama is trying to keep focus on the early benefits of the law. He's getting some help from his Democratic allies in making sure health care stays front and center in the months ahead -- and that criticism does not go unanswered.

Obama's town hall Tuesday was only one component of a multi-layered campaign to promote the health care law. Anita Dunn, Obama's former communications director at the White House, is teaming up with Democratic strategist Andrew Grossman to launch an advocacy arm to promote the bill. The effort reportedly aims to raise $25 million every year for the next five years.

They'll have their work cut out for them.

Republicans served notice early on they were going to make the November election all about health care. Former New York Gov. George Pataki is leading an effort to collect 1 million petition signatures and force congressional candidates to say whether they support repeal.

A Rasmussen Reports poll out Monday shows that 58 percent of 1,000 likely voters want to repeal the law, while 35 percent want the law to stay put.

Pollster Scott Rassmussen said even with support leaning for repeal, it's a long shot that Republicans will regain control of Congress with the mandate to overturn the law.

"It looks like Democrats will be able to hang on to majority control of the House. If that happens, repeal is going nowhere. If the Republicans gain control and have a very good night in November, the House is very likely to pass a repeal and then replace it with some kind of popular components from the legislation. It will probably die in the Senate," he said.

Nonetheless, House Speaker Nancy Pelosi got a taste of that enduring criticism Tuesday during a campaign-style speech at a hotel in Washington, where she was trumpeting the benefits of the bill. A protester screamed, "I'm not going back to a nursing home," and others started chanting as Pelosi tried to calm down the crowd.

The scene was more controlled in Wheaton, Md., where Obama gathered a group of seniors to talk about the rebate.

"This debate got pretty contentious at times last year. I think you remember," Obama said. He dismissed the "hysterical claims" and repeated several pledges he used to sell the bill earlier in the year.

"What you need to know is that the guaranteed Medicare benefits that you've earned will not change," he said. "If you like your doctor, you can keep your doctor."

The rebate is meant to help seniors stuck in the so-called "doughnut hole." That refers to seniors who, after racking up close to $3,000 in Medicare prescription drug benefits and expenses, fall into a gap where they are forced to pay for full drug costs until they have spent another $3,610. After that, most of their drug costs are covered again.

Sen. John Kerry, D-Mass., one of the advocates for closing the hole, said the rebate will go to 4 million Americans.

"In the coming years, the health reform law will eliminate the Medicare prescription drug benefit gap and the donut hole will be nothing more than a relic of history," he said in a written statement.

While the health care law aims to close the gap eventually, Republicans ridiculed Obama's town hall event as a ploy to win over skeptical seniors.

"Seniors are particularly fed up with this legislation and that is why the White House is staging an event today aimed at convincing them they are getting a good deal," Senate Minority Leader Mitch McConnell, R-Ky., said on the Senate floor Tuesday. "But seniors are right to be skeptical."

Republicans on the House Ways and Means Committee put out a memo saying the rebate checks are only going to a fraction of beneficiaries.

"Don't be surprised if the president forgets to mention that more than 9 in 10 Medicare beneficiaries will never receive one of these checks," the memo said, citing figures from the Department of Health and Human Services.

Republicans and the health insurance industry complained that, despite the rebate checks, the law would still lead to a half-trillion dollars in Medicare cuts and cause millions to lose their current Medicare coverage.

"Seniors are going to be shocked when they see the impact recently enacted Medicare Advantage cuts will have on their health care coverage," Robert Zirkelbach, spokesman for America's Health Insurance Plans, said in a statement.

AHIP points to an April report from the actuary for the Centers for Medicare and Medicaid Services that warned the cuts could make it difficult for some doctors to "remain profitable." The CMS study said some "might end their participation in the program," in turn "possibly jeopardizing access to care for beneficiaries."

The report also predicted that about 7 million Medicare Advantage customers who would otherwise be on the plan would not be with the program by 2017.

Asked about those concerns Tuesday, Obama said Medicare Advantage -- the program that allows insurance companies to administer Medicare benefits and offer enhanced coverage -- was being cut in order to reduce waste by the insurance industry.

The Medicare actuary report also found the law would raise projected health care spending by about 1 percent over 10 years, or $311 billion, up from the $222 billion previously estimated.

The report said the law would extend coverage to 34 million uninsured people. 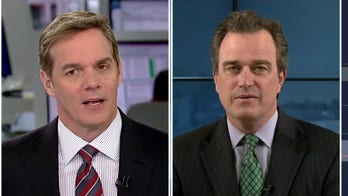