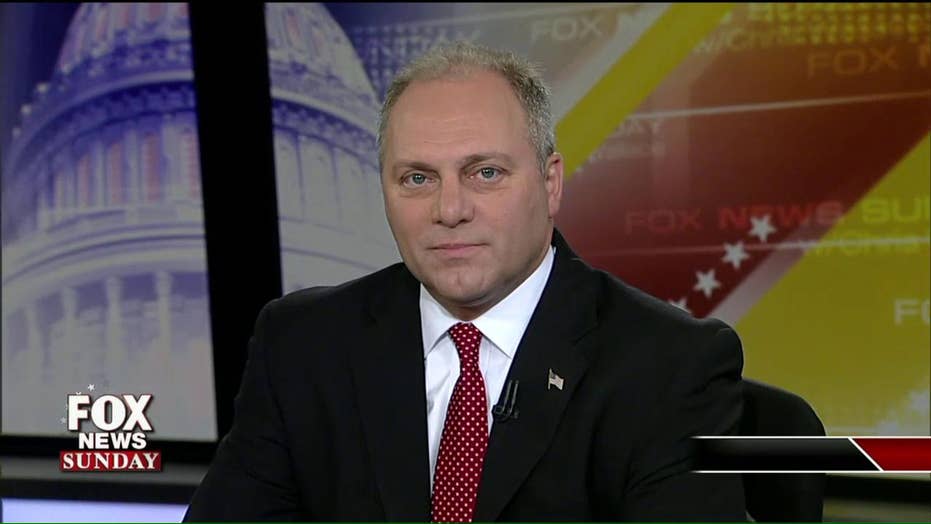 Louisiana GOP Rep. Steve Scalise, the incoming House Majority Whip, said Sunday he will stay in Washington until Congress agrees to an emergency spending plan for the border-immigration crisis, but declined to say whether he will cancel the lower chamber’s August recess.

“I’m going to stay until it’s done,” said Scalise, the Tea Party-backed lawmaker who in June became the No. 3 Republican in the GOP-led House after Majority Leader Eric Cantor lost his re-election bid.

In an interview with “Fox News Sunday,” Scalise also laid out House Republicans' legislative agenda before the November elections, including a vow to agree to a spending bill before the federal government runs out of money in October -- avoiding the possibility of a so-called government shutdown.

He also said the GOP will continue to address problems with ObamaCare that would include plans to repeal the law and find alternatives for consumers, including the possibility of allowing them to buy government-backed insurance across state lines, which could lower premium costs.

“This is something that I am absolutely passionate about," said Scalise, who suggested the possibility of another attempt to repeal ObamaCare, the president’s signature 2012 health-care reform law.

On the border-immigration issue, House Republicans appear to want a $1 billion emergency-spending plan, as an alternative to President Obama’s $3.7 billion request.

“I believe that we will act,” House Rules Committee Chairman Pete Sessions, R-Texas, told The Hill newspaper Friday after a private meeting. “There’s no one in there that didn’t recognize that we have to address this problem.”

The United States’ southern border has been overwhelmed over the past nine months by an estimated 57,000 Central American children coming illegally into the country and hoping to stay, based on a 2008 law that protects children from non-bordering countries from human trafficking.

The crisis has resulted in the need for more U.S. personnel on the border and elsewhere to deal with security and legal issues and the related humanitarian needs for the incoming youths, such as food and shelter.

Scalise also said Sunday that much of the problem is Obama and the Democrat-controlled Senate failing to act, not the House divide among leadership, Democrats and the GOP conservative wing.

“A lot of issues have passed in the House with Democratic support,” he said. “There are 300 bills sitting in the Senate. … And yet the Senate refuses to act, the president refuses to act.”