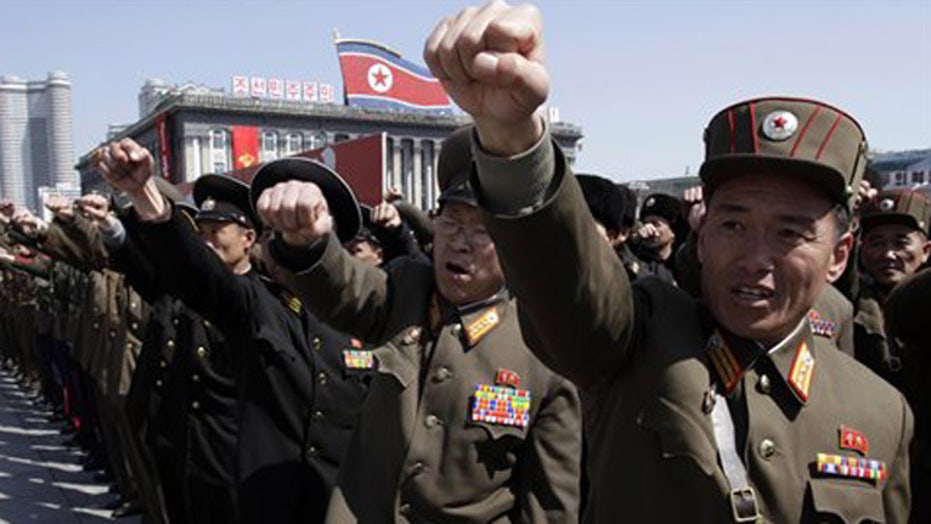 Another act of defiance from North Korea

Jennifer Griffin has reaction from the Pentagon

With the threats billowing out of North Korean dictator Kim Jong Un's regime at an unusually rapid clip, concern is mounting that the young leader could be backing himself into a corner -- feeling compelled to do something or lose face.

The Pentagon is worried Kim may put himself in a position where he feels he has to act on his threats.

The North Koreans, while having made progress in their ballistic missile program, still have not mastered the technology of delivering a nuclear device by a long-range missile. But they are making progress, and that is what has the Pentagon concerned. Plus there is the concern that North Korea could strike at South Korea, a top U.S. ally.

"The North Koreans seem to be headed in a different direction here. So we will unequivocally defend and we are unequivocally committed to that alliance with South Korea, as well as our other allies in that region of the world.  And we will be prepared -- we have to be prepared to deal with any eventuality there," Defense Secretary Chuck Hagel said Thursday.

Kim warned Friday he is preparing to "settle accounts with the U.S." after the U.S. deployed B-2 stealth bombers to South Korea to participate in a training exercise Thursday.

The third-generation dictator's comments in a meeting with senior generals are part of a rising tide of threats meant to highlight anger over the drills and recent U.N. sanctions over Pyongyang's nuclear test.

Later Friday at the main square in Pyongyang, tens of thousands of North Koreans turned out for a 90-minute mass rally in support of Kim's call to arms.

Men and women, many of them in olive drab uniforms, stood in arrow-straight lines, fists raised as they chanted, "Death to the U.S. imperialists." Placards in the plaza bore harsh words for South Korea as well, including, "Let's rip the puppet traitors to death!"

The U.S. military says the two B-2 stealth bombers sent to South Korea were meant to demonstrate the Pentagon's commitment to defend its ally against threats from North Korea.

The two B-2 Spirit bombers flew more than 6,500 miles from Whiteman Air Force Base in Missouri to South Korea, dropping inert munitions before returning to the U.S., according to a statement released by U.S. Forces Korea.

"The United States is steadfast in its alliance commitment to the defense of the Republic of Korea, to deterring aggression, and to ensuring peace and stability in the region," the statement said.

The B-2 Spirit is capable of delivering both conventional and nuclear weapons. The Pentagon said the mission was part of its ongoing Foal Eagle training exercise series, which began March 1 and ends April 30.

Hagel said Thursday afternoon that the move was part of normal exercises and not intended to provoke a reaction from North Korea.

The exercise, though, was announced a day after North Korea said it had shut down a key military hotline usually used to arrange passage for workers and goods through the Demilitarized Zone.

North Korea, which says it considers the U.S.-South Korean military drills preparations for invasion, has pumped out a string of threats in state media. In the most dramatic case, Pyongyang made the highly improbable vow to nuke the United States.

On Friday, state media released a photo of Kim and his senior generals huddled in front of a map showing routes for envisioned strikes against cities on both American coasts.

Experts believe the country is years away from developing nuclear-tipped missiles that could strike the United States. Many say they've also seen no evidence that Pyongyang has long-range missiles that can hit the U.S. mainland.

Still, there are fears of a localized conflict, such as a naval skirmish in disputed Yellow Sea waters. Such naval clashes have happened three times since 1999. There's also the danger that such a clash could escalate. Seoul has vowed to hit back hard the next time it is attacked.

North Korea's threats are also worrisome because of its arsenal of short- and mid-range missiles that can hit targets in South Korea and Japan. Seoul is only a short drive from the heavily armed border separating the Koreas.

"The North can fire 500,000 rounds of artillery on Seoul in the first hour of a conflict," analysts Victor Cha and David Kang wrote recently for Foreign Policy magazine. They also note that North Korea has a history of testing new South Korean leaders; President Park Geun-hye took office late last month. "Since 1992, the North has welcomed these five new leaders by disturbing the peace," they wrote.