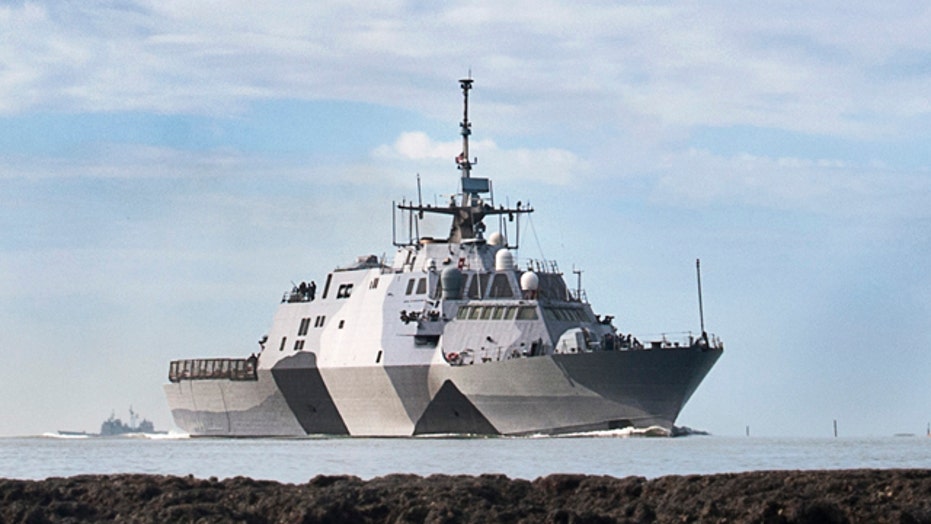 Its arrival coincides with further heavy rhetoric from North Korea. News agency KCNA carried the government’s message Wednesday that it had ordered artillery and rocket units into "combat posture" to prepare to target U.S. bases in the United States mainland, Hawaii and Guam.

On its maiden deployment, USS Freedom arrived in the U.S. 7th Fleet Area of Responsibility (AOR) on March 20 -- a zone that covers more than 48 million square miles, stretching west from the International Date Line to the western coast of India. At any given moment, about 100 ships and submarines are deployed there and assigned to 7th Fleet.

On March 15, the fleet marked the 70th anniversary of its maintaining security and stability in the region.

While North Korea is not thought to have ballistic missiles or nuclear weapons capable of reaching the U.S. mainland, it is capable of striking U.S. bases in the region, including Guam, where Freedom will be visiting.

The ship will participate in some large scale training exercises in Southeast Asia, involving maritime security operations with regional partners.

North Korea, meanwhile, has been carrying out its own large-scale military exercises.

'As the U.S. Navy supports the U.S. government rebalance to the Indo-Asia-Pacific, there is no better place to demonstrate LCS capabilities.'

Led by Cmdr. Timothy Wilke, Freedom will initially be manned by her crew of 91 sailors, who include mission package personnel and an aviation detachment to operate its MH-60 helicopter.

As designed, Freedom can operate with substantially fewer crew, requiring only 40 core sailors plus support crew for the aviation and mission packages.

Should a battle erupt, Freedom can act as a hub to tie together sea, air and land assets.

COMBATTS-21 Combat Systems
The ship’s battle management system, also produced by Lockheed Martin, provides a flexible, next-generation defense system that can be reconfigured for a specific threat in days.

COMBATSS-21 is a self-defense suite and integrates the radar, electro-optical infrared cameras, gunfire control system, countermeasures and short-range anti-air missiles, as well as a variety of missile and torpedo systems, naval guns and more.

What if the enemy had littered the coastal waters with mines? Freedom’s countermeasures package can search twice as quickly as earlier systems. It requires only two operators and would include tech like the Remote Multi-Mission Vehicle and Raytheon’s airborne SONAR mine countermeasure detection system, AQS-20A.

Remember the USS Cole incident where American lives were lost? Small boats continue to be an ongoing threat.

To protect the fleet from this sort of asymmetric warfare, Freedom’s tech could include the Gun Mission Module MK 50 MOD, a Non-Line of Sight Launch System Mission Module, a MH-60R helicopter and vertical takeoff drones.

The next two ships, the Milwaukee and the Detroit, are currently under construction.