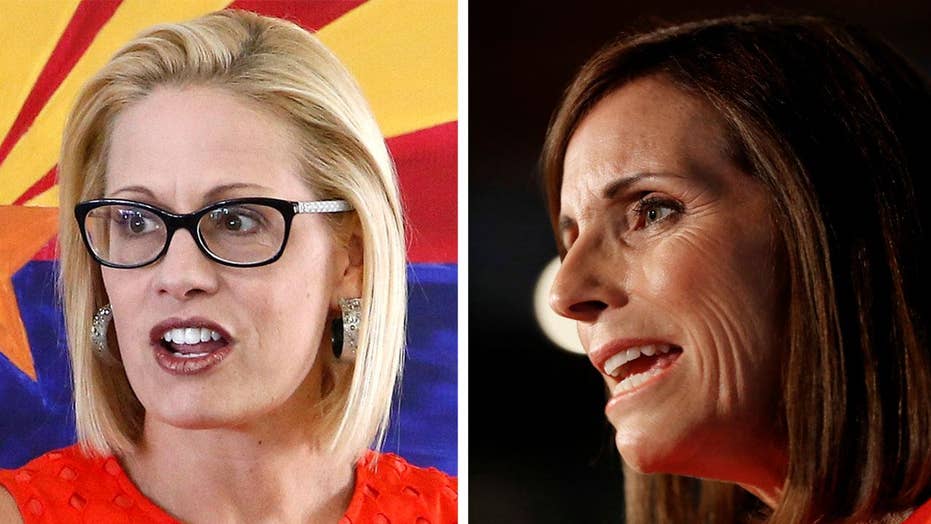 Republican Martha McSally accused Democrat Kyrsten Sinema of saying “it was OK to commit treason” in a fiery Arizona Senate debate on Monday, in response to Sinema once telling a radio host she didn’t care if someone wanted to join the Taliban.

McSally was referring to a 2003 interview on a local Arizona radio station, where Sinema told the host she didn’t object to individuals going abroad and fighting for the Islamic fundamentalist group.

“As an individual, if I want to go fight in the Taliban army, I go over there, and I’m fighting for the Taliban, I’m saying that’s a personal decision,” host and activist Ernest Hancock told Sinema, who was then a Green Party activist.

“Fine. I don’t care if you go and do that, go ahead,” she replied, according to the audio recording obtained by Fox News. It was one of a number of controversial statements that recently resurfaced from Sinema.

On Monday night, McSally demanded an apology from Sinema for the comments and accused her of saying “it was OK for Americans to join the Taliban to fight against us.”

“I want to ask right now whether you’re going to apologize to the veterans and me for saying it’s OK to commit treason, Kyrsten,” she said.

“Martha has chosen to run a campaign like the one you’re seeing right now where she’s engaging in ridiculous attacks and smearing my campaign,” Sinema fired back, saying McSally was not showing "the full picture."

“Martha’s trying to make this Senate campaign about me, but what we know is that this campaign is about everyday Arizonans and I’ll fight for them,” she said.

"While we were in harm's way, she was protesting our troops in a pink tutu," McSally said Monday.

Sinema accused McSally of being a blind partisan who follows President Trump, while arguing that she backed Trump when he was right, but opposed him when he was not.

"Martha has a 98 percent voting record with her party and with her president, which I think demonstrates she's not willing to do what's right for Arizona if the president is wrong on an issue," she said.

But Sinema has been dogged by a number of controversial past comments being released to the media. Last week it emerged that in a 2011 speech she implied that her home state produced “crazy” as she advised liberal activists on how to “stop your state becoming Arizona.”

A Fox News poll taken last month showed Sinema with a 2-point lead over McSally, 47 percent to 45 percent. Sinema led McSally by 9 points among women, 14 points among voters under age 45 and by 29 points among Hispanic voters.

Fox News’ Lukas Mikelionis and Samuel Chamberlain and The Associated Press contributed to this report.