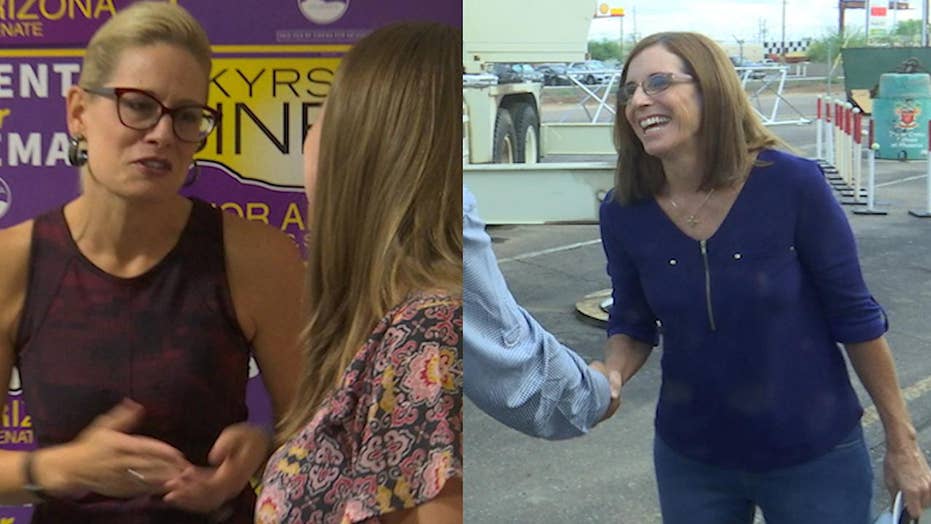 US Senate race in dead heat in Arizona

Rep. Kyrsten Sinema, D-Ariz., who is running in a tightly contested U.S. Senate race, implied that her home state produced "crazy" in a 2011 speech in which she also promised to advise liberal activists on how to "stop your state from becoming Arizona."

Some critics are comparing the remarks to Hillary Clinton's infamous comment about Trump supporters being "deplorables."

An edited version of Sinema's speech to the Texas Stonewall Democratic Caucus, a Democratic LGBT group in the Lone Star State, was posted on Twitter on Thursday by the Reagan Battalion, an anonymous conservative group. A longer version of the speech is available on YouTube.

Sinema, a one-time Green Party activist, has fashioned herself as a moderate willing to work with both parties in her contest against fellow U.S. Rep. Martha McSally. The race winner will fill the Senate seat vacated by the retiring Republican Jeff Flake.

"Calling Arizonans crazy and having particular disdain for Republicans when she wants Republicans to vote for her is unbelievable," McSally told reporters at a roundtable with business leaders and Gov. Doug Ducey. "And Arizonans need to know about it."

"(D)o everyone a favor don’t vote for Democrats!" another wrote. "Hillary started this by calling Trump supporters deplorable‘s."

Sinema's campaign issued a response to the posting of the speech.

"She was frustrated that no one in the state legislature was standing up to out-of-state special interests working to take away health care from children, make tuition more expensive, and take job security away from working families," Sinema spokeswoman Helen Hare said in a statement Thursday. "Kyrsten was born here, and will always stand up to outside special interest groups to protect and defend Arizonans."

Sinema gave her speech after Arizona Republicans had passed SB1070, a controversial immigration law that led to nationwide boycotts and concern even among some Arizona Republicans that the Legislature had moved too far right. Those concerns led to a recall against the then-Senate President Russell Pearce, whom Sinema blamed in her remarks for much of the discord. She accused Pearce of was carrying hardline immigration bills and other conservative legislation on abortion and health care at the behest of racist anti-immigrant groups and a corporate-backed conservative organization that writes "model legislation" for state lawmakers.

"There's something wrong with the people in public office in Arizona," Sinema said. "People are saying the tea party, the tea party. Those people have been in charge 20 years in Arizona. They're called Republicans."

A Fox News poll taken last month showed Sinema with a two-point lead over McSally, 47 percent to 45 percent. Sinema led McSally by nine points among women, 14 points among voters under age 45 and by 29 points among Hispanic voters.