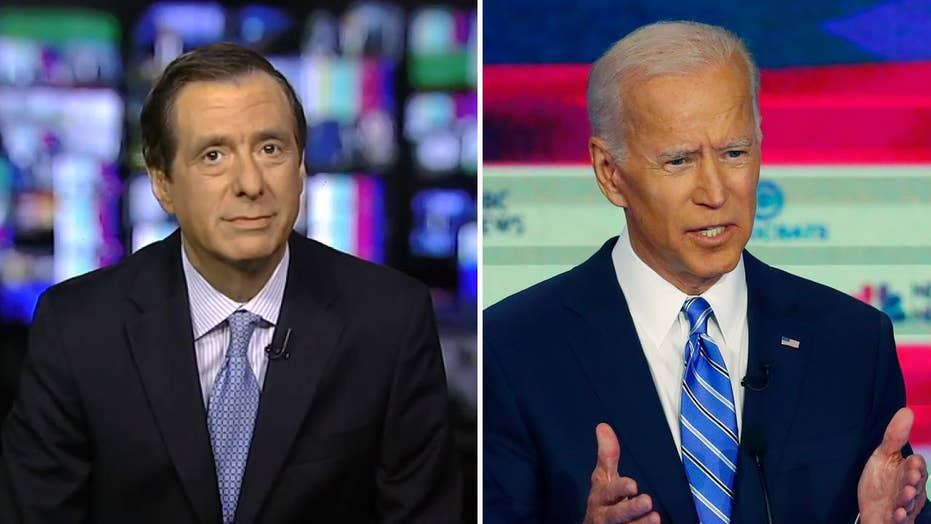 Howard Kurtz: How the debates were dominated by pandering to progressives

'MediaBuzz' host Howard Kurtz weighs in on how the Democratic primary debate last week showed just how left the party has moved, including Joe Biden.

It's standard practice in presidential politics: Candidates move to the left (or right) to win the nomination, then tack toward the center in the general election.

But the Democrats are in danger of marching so far left that they go over a cliff.

That's not just my view. Mainstream reporters, who tend to be less sensitive to liberal positions that match their personal views, are openly acknowledging and debating the dramatic shift. It was even on the front page of The New York Times.

For those whose most fervent desire is to evict Donald Trump from the White House, there's growing concern that the Democrats are blowing it.

GUTFELD: IT'S ALL DOWNHILL FOR BIDEN, HARRIS LIKELY TO BE DEM NOMINEE

The two debates in Miami last week crystallized how most of the candidates are taking stances that would antagonize many millions of Americans once you get out of the liberal bubble.

And the few contenders who are positioning themselves as left-of-center moderates are muting those views in the face of palpable progressive pressure. So with Trump already signaling that he plans to run against a socialist party, they — including Joe Biden and Amy Klobuchar — are being lumped in with the left-wingers.

We're talking here about big, fundamental stuff, especially on health insurance and immigration. And in some instances, these are positions that no presidential candidate other than Bernie would have dared take in 2016. But now, the aspirants are torn between the burning desire to beat Trump and the overwhelming urge to be in lockstep with a "woke" party. And those two imperatives are coming into direct conflict.

The Democrats are now a party where all 10 candidates on stage raised their hands to support health services for illegal immigrants. As recently as 2016, Hillary Clinton drew flak for not having fully embraced a New York plan to give driver's licenses to illegal immigrants. And no one aggressively challenged Julian Castro when he called for decriminalizing illegal border crossings.

The Democrats are now a party where several top contenders (including Elizabeth Warren and Kamala Harris, despite the latter's subsequent attempt to fudge the issue) support government-run health care that would abolish private medical insurance for more than 150 million Americans.

The Democrats are now a party calling for free college tuition or free community college, which would be hugely expensive.

The Times news story flat-out declares the debates showed that "many of the leading presidential candidates are breaking with the incremental politics of the Clinton and Obama eras, and are embracing sweeping liberal policy changes on some of the most charged public issues in American life, even at the risk of political backlash."

And: "With moderate Democrats repeatedly drowned out or on the defensive in the debates, the sprint to the left has deeply unnerved establishment Democrats, who have largely picked the party nominees in recent decades."

Could Harris' climb be trouble for Biden? Reaction and analysis on 'The Five.'

Two leading Clintonites, James Carville and Rahm Emanuel, are on the record as ripping the leftward march. Says Carville: "This is an election that Trump can’t win but Democrats can lose."

Even more biting are pieces by two moderately conservative but anti-Trump columnists for the Times.

David Brooks, who says he couldn't vote for Trump in a million years, writes under the headline "Dems, Please Don't Drive Me Away":

DONNA BRAZILE: BIDEN'S ADVISERS SHOULD HAVE BETTER PREPARED HIM FOR HARRIS CHALLENGE

"The party is moving toward all sorts of positions that drive away moderates and make it more likely the nominee will be unelectable. And it's doing it without too much dissent."

Brooks says, for instance, that "Democrats are wandering into dangerous territory on immigration. They properly trumpet the glories immigrants bring to this country. But the candidates can't let anybody get to the left of them on this issue. So now you've got a lot of candidates who sound operationally open borders. Progressive parties all over the world are getting decimated because they have fallen into this pattern."

Bret Stephens says the Dems are becoming "a party that makes too many Americans feel like strangers in their own country."

He goes into an us-versus-them riff:

"They speak Spanish. We don't. They are not U.S. citizens or legal residents. We are. They broke the rules to get into this country. We didn't. They pay few or no taxes. We already pay most of those taxes. They willingly got themselves into debt. We're asked to write it off. They don't pay the premiums for private health insurance. We're supposed to give up ours in exchange for some V.A.-type nightmare. They didn't start enterprises that create employment and drive innovation."

And when a candidate like Biden offers more incremental change, essentially a return to the Obama era, he is mocked and dismissed for living in the past.

It's not like the hard-left proposals will be magically forgotten in the fall of 2020. The Democrats sure are giving Trump plenty of ammunition.