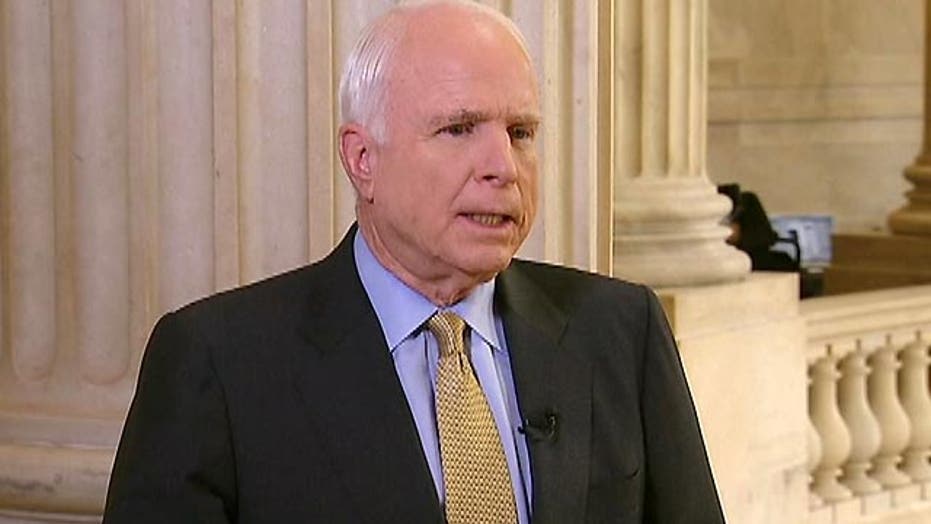 McCain: 'We should all be ashamed' in VA scandal

Uncut:Veteran senator and former POW reflects on hearing on multiple scandals that have rocked VA hospitals and created a 'crisis in confidence' in Veterans Affairs Secretary Eric Shinseki's leadership

Lawmakers are fuming over what they describe as a "shameful" decision by the Justice Department that could help the former head of the scandal-scarred Phoenix Veterans Affairs hospital get her job back.

Attorney General Loretta Lynch, in a letter sent Tuesday, notified House Majority Leader Kevin McCarthy, R-Calif., that the DOJ would not defend a key provision of the Veteran Affairs reform law, passed in the wake of the scandal over officials covering up long patient wait-times.

The provision in question had helped uphold the expedited firing of the Phoenix official at the heart of the scandal, Sharon Helman.

Now, lawmakers say Lynch's decision could put Helman back on the job, as she pursues a lawsuit against the government.

Helman had been fired in November 2014 amid criticism not only over the wait-time cover-ups at the Phoenix VA but also unreported gifts. Congressional critics warn the DOJ move is a blow to accountability.

“The effect of this reckless action is clear: It undermines very modest reforms to our broken civil service system supported in 2014 by the president and an overwhelming majority of Congress,” House Veteran Affairs Committee Chairman Jeff Miller, R-Fla., said in a statement Wednesday night.

Lynch stressed in her letter that the DOJ will "continue to defend the vast bulk" of the law, including against Helman's other legal challenges. But she said the DOJ would not defend the provision that denied Helman an appeal after a judge upheld her removal.

"In its narrow decision, the Department determined that one aspect of the procedures to review the lawfulness of the employee’s removal - the provision giving an administrative judge final and unreviewable discretion to determine if the removal was lawful - violates the U.S. Constitution," a spokesperson for the DOJ told Fox News. "The Department continues to defend all other aspects of the statute in this matter."

“The Obama Administration's decision to disregard the Veterans Access, Choice, and Accountability Act with regard to Sharon Helman – who led the Phoenix VA during the scandal in care in which at least 40 veterans died – is shameful,” McCain said in a written statement Wednesday.

Helman was fired as part of a crackdown in the wake of the national scandal over long wait times for veterans trying to get medical care and falsified records covering up the delays.

“When Congress passed the Veterans Choice Act, a key provision allowed for incompetent and indifferent executives whose inaction allowed veterans to die to be more easily fired. Now, even after the President signed this provision into law, his administration is refusing to defend this measure of accountability," McCarthy told CNN Wednesday.

Helman, who led the hospital from 2012 to 2014, as well as two other high-ranking officials, were placed on administrative leave amid an investigation into allegations that 40 vets died while awaiting treatment at the hospital. The scandal also led to the ousting of former VA Secretary Eric Shinseki and the creation of the new law that overhauls the veterans’ health care system.

Helman is suing the federal government to win her old job back and as part of that argued the congressional reforms unconstitutionally denied her a step to appeal her dismissal.

"While this matter is still pending in federal court, we will immediately begin exploring legislative remedies to thwart the Obama administration's blatant advocacy on behalf of those whose mismanagement, malfeasance and crimes may have contributed to veteran and taxpayer harm," Miller said.