Kellyanne Conway: Those opposing investigation into intelligence leaks 'can't have it both ways'

Kellyanne Conway criticized those who are against an investigation into where intelligence leaks came from during the Russia investigation, saying that people 'can't have it both ways.'

A letter from Sens. Ron Johnson, R., Wis., and Chuck Grassley, R., Iowa, published on Monday called on the inspector general for the intelligence community to look into "apparent leaks" from FBI personnel amid the revelation of texts between two employees in Dec. 2016 which referred to their "sisters" beginning to "leak like mad."

From the White House front lawn on Tuesday morning, Conway told "Fox & Friends" hosts that she believes it's crucial to determine whether or not these leaks occurred and how they may have impacted the Mueller investigation.

"I for one, as a citizen of this country, want to know if intelligence officers were leaking information to the press," Conway said. "Why not? We have to see who the leakers were. And the leakees. I think a few of them look a little nervous," she continued.

In addition to the possibility of leaks about the investigation from the intelligence community to the press, the letter from Johnson and Grassley, chairmen of the Finance Committee and Homeland Security and Governmental Affairs, respectively, argued that it's imperative to determine whether the FBI had the right to implement a Foreign Intelligence Surveillance Act warrant to monitor former Trump aide Carter Page. 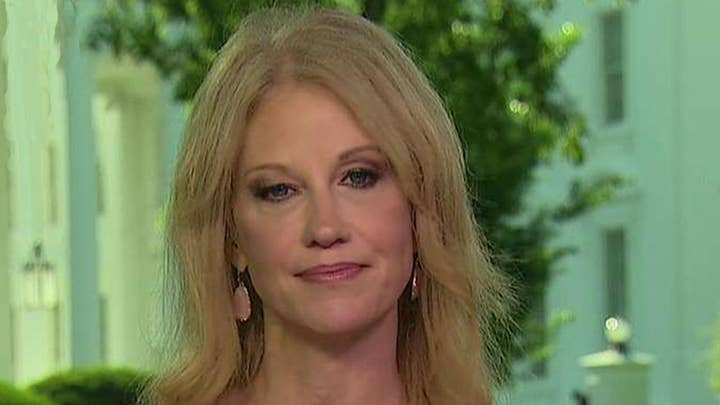 KELLYANNE CONWAY TO DEMOCRATS: 'ARE YOU GOING TO TALK FOR THE REST OF 2019 ABOUT IMPEACHMENT OR INFRASTRUCTURE?'

Conway echoed their concerns on Tuesday, saying that it's necessary to determine the root of Mueller's investigation, which she referred to as "definitive, authoritative and exhaustive."

"Let's see where this all started," she continued. "What is everybody afraid of? What do you have to hide? Where did this all start?"

Attorney General Bill Barr has hinted at his own probe into potential leaks last Wednesday, testifying during questioning by Grassley during a Senate Judiciary Committee hearing that the Department of Justice is currently pursuing "multiple criminal leak investigations."

Grassley and Johnson's letter concluded that they are "looking forward" to Justice Department Inspector General Michael Atkinson's reports regarding the questions raised in their note, "in order to gain a better understanding of what happened during the Russia investigation."