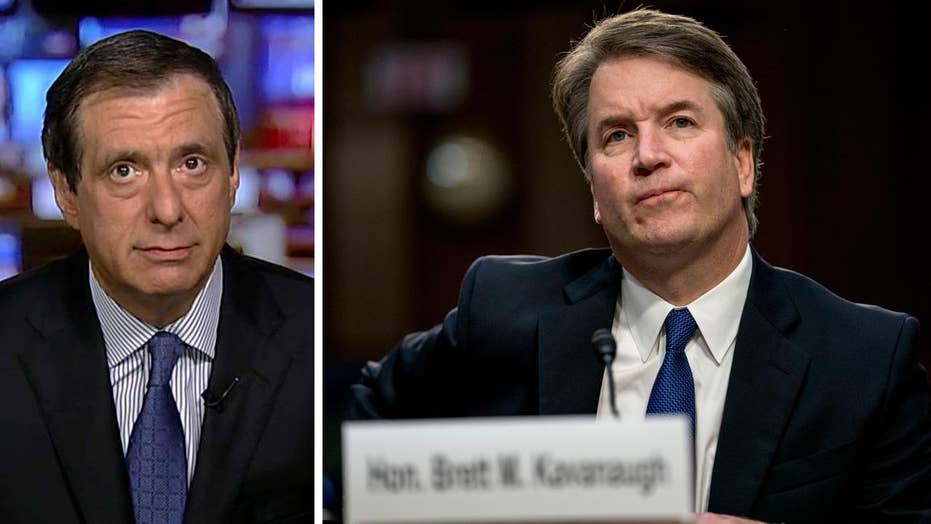 Kurtz: Why the Democrats revolted at that crazy Hill session

'MediaBuzz' host Howard Kurtz weighs in on the chaos at the Brett Kavanaugh confirmation hearing and why it showcased Congress at its worst.

It would be tempting to call the Brett Kavanaugh hearing a circus, but that would be unfair to clowns and jugglers.

The thing totally spun out of control from the first moments yesterday, a combination of Democrats going into all-out resistance mode and screaming protestors who, for some reason, Capitol police took roughly forever to remove.

And the confirmation hearing began on a day when President Trump drew flak for an extraordinary tweet raising questions about the nonpartisan mission of the Justice Department.

The backdrop for the Senate hearing is that everyone knows the Republicans have the votes to put Kavanaugh on the Supreme Court, since the filibuster has been abolished. And the Democrats are still angry about the mistreatment of Merrick Garland in 2016.

So the Democrats, as a minority, are really only able to accomplish two things: Play to their base in aggressively opposing the nomination and perhaps slow down the show. They simply lack the power to do anything else.

So it was that Kamala Harris, with an eye on 2020, immediately demanded that Chairman Chuck Grassley adjourn the Judiciary Committee hearing. Her argument, echoed by her Democratic colleagues, is that they'd just gotten 42,000 pages of documents the night before, and there were reams of other Kavanaugh papers that the White House was withholding on grounds of executive privilege.

Democrat Richard Blumenthal called the session a "charade" and a "mockery."

But Grassley, who patiently allowed the Dems to air their objections, said the panel had received more material than for any other high court nominee in history. Republican John Cornyn said the hearing, punctuated by screaming spectators, had degenerated into "mob rule."

One reality that undercuts the document demands is that all the committee Democrats have already announced their opposition to Kavanaugh. So whatever the validity of their request, it's not going to change their minds about elevating the appeals court judge.

In the end, it was the worst of Congress on display. An entire day was devoted to procedural wrangling and then endless bombast as senators made their opening statements, some slamming the nominee or asking him questions while Kavauaugh had to sit there, stone-faced, unable to respond. Only after enduring hours of this split-screen speechifying did Kavanaugh get to deliver his opening remarks. It was a high-profile display of talking without listening.

Meanwhile, the man who nominated Brett Kavanaugh tweeted the following:

"Two long running, Obama era, investigations of two very popular Republican Congressmen were brought to a well publicized charge, just ahead of the Mid-Terms, by the Jeff Sessions Justice Department. Two easy wins now in doubt because there is not enough time. Good job Jeff."

So this is nothing short of remarkable. One of those lawmakers, Chris Collins, faces well-documented charges of insider trading (and the case did not begin under Obama). The other, Duncan Hunter, has been accused of misusing, along with his wife, $250,000 in campaign funds on lavish personal expenses.

So what is the president saying? That Sessions should have delayed the charges until after the midterms to help the GOP? That the DOJ shouldn't have brought the charges at all because the House members are Republicans?

When Trump taunts his attorney general over the Russia probe, I get the larger strategy, which is trying to discredit the investigation.

As a former Justice Department reporter who has watched career prosecutors bring cases against Democratic and Republican politicians in every administration, I don't understand, in this case, what message the president is trying to send.