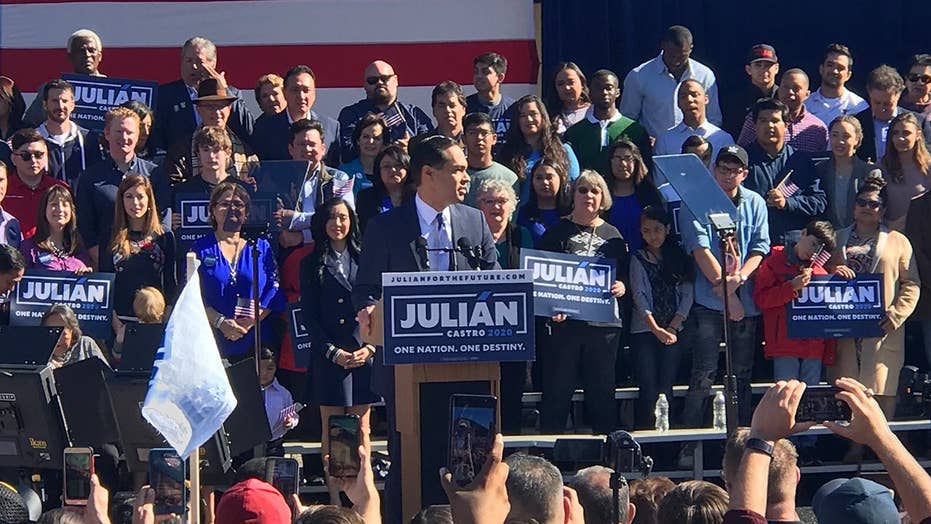 He joins a potentially crowded field of Democratic candidates

"We’re going to make sure the promise of America is available to everyone in this 21st century," he told the crowd.

The Stanford University and Harvard Law School graduate made the announcement in his hometown, where he served as mayor from 2009-2014. His term ended when former President Barack Obama tapped him to become HUD Secretary.

TULSI GABBARD, HAWAII DEMOCRAT, SAYS SHE WILL RUN FOR PRESIDENT IN 2020

Still, Castro touted his experience in the country’s seventh largest city as a testament of his leadership abilities and why he should make history as the country's first Latino president.

He outlined climate change and universal healthcare as some of his main priorities.

"I’m running for President because it’s time for new leadership and to make sure opportunities I had are available to every American," he said.

Castro, who made stops in Iowa and Las Vegas days before his announcement, now joins what could be a crowded Democratic field. Senator Elizabeth Warren of Massachusetts launched an exploratory committee on Dec. 31. Former Vice President Joe Biden, California Senator Kamala Harris, and former El Paso Congressman Beto O’Rourke, whose profile has increased after narrowly losing to Senator Ted Cruz in November, have also been identified as potential candidates.

Rep. John Delaney of Maryland is already running for president, and Hawaii Rep. Tulsi Gabbard said in an interview Friday that she has decided to run for the White House. 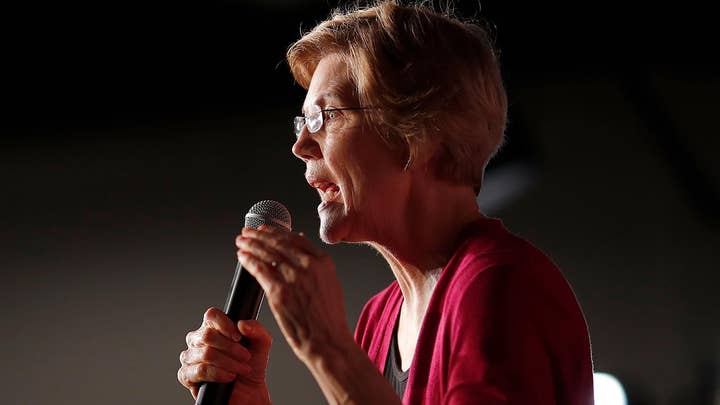 If he wins, Castro would not only be the first Latino president. At only 44 years old, he would be one of the youngest Americans to hold the seat.

However, critics say the long list of hopefuls could easily outshine the Texas native.

“People here in San Antonio know him obviously…but, if you get out of Texas, and you ask an ordinary citizen on the street, and you say, Julian Castro, they’ll probably say, who?” said Johnny Arredondo, a member of the Republican Club of Bexar County.

“Julian Castro has made history by becoming one of the biggest lightweights to ever run for president," Republican National Committee spokesman Michael Ahrens said in a statement. "He was a weak mayor who couldn’t even handle being HUD secretary. This is obviously just another desperate attempt to become someone else’s running mate.”

While Castro was well known in Texas politics, he was launched into the national spotlight when he delivered the 2012 Democratic National Convention keynote speech. After ending his term as HUD secretary, Castro was floated as a potential vice presidential candidate for former Secretary of State Hillary Clinton but was passed over for Virgina Senator Tim Kaine.

Since then, Castro’s time in the national spotlight has waned, which is why Texas A & M University San Antonio political science professor, Andrew Sanders, says Castro’s early announcement is a good move.

ELIZABETH WARREN BARNSTORMS IOWA AMID 2020 PUSH, SAYS SHE WANTS TO 'RETURN POLITICS TO THE PEOPLE'

“He’s been out of the limelight for a while now. His experience in government is somewhat limited compared to some of the other names that are likely to appear in the field. So, it’s probably a wise move for him to get his name out there this point,” said Sanders.

Former San Antonio Mayor and Housing and Urban Development Secretary Julian Castro, front left, waves as he arrives with his family to an event where he announced his decision to seek the 2020 Democratic presidential nomination, Saturday, Jan. 12, 2019, in San Antonio. (AP Photo/Eric Gay)

Yet, Castro’s supporters believe the three-term mayor has what it takes to clinch the country’s highest public office.

“He is the epitome of the American dream...Julian is as driven a human being as there is, and he wants to win. And, at every stage in his life, he's been a winner. And, he'll do what it takes to win the election, "said political strategist, Christian Archer, who led Castro’s successful run for mayor.

Castro highlighted the preservation of public housing, investments in new affordable housing, and efforts to make the rental market more affordable as accomplishments during his time as HUD Secretary.

As mayor, Castro passed Pre-K 4 SA, an elite pre-K program, which has become a signature resume line for the candidate.

Others, however, have slammed Castro’s actions as being too extreme.

“Voters outside of San Antonio and Texas need to be aware that Castro left the city deep in debt, with a bloated bureaucracy…Julian Castro can be described as a Hispanic version of Obama,” said George Rodriguez, Bexar County Republican Party spokesman.

Archer acknowledges that Castro’s campaign will be met with challenges, but he has high hopes.

“I think he’s got a long way to go. But, then there’s this next generation of leaders, And, I think if people take a moment and listen to Julian Castro, what he’s done in the past, but more importantly what his vision is for the future, I think he will catch fire,” said Archer.