Sen. Elizabeth Warren is making the rounds in Iowa after announcing her presidential exploratory committee

Sen. Elizabeth Warren, D-Mass., hit Iowa this weekend with her brand of left-wing populism as she considers a 2020 presidential run -- calling for a better deal for the middle class and to "return politics to the people.”

Warren announced this week that she had launched an exploratory committee to consider whether to jump into what is expected to be a packed 2020 field.

But in her stump speech in the first-in-the-nation caucus state, Warren barely mentioned Trump, focusing her ire on the status quo in the nation’s capital and what she said was a too-tight relationship between Washington and Wall Street.

Later she said Washington worked, only if one was armed with an army of lawyers or lobbyists: “It is corruption, pure and simple, and it’s time to fight back."

While some Democrats have pushed to focus on Trump, and impeachment amid the FBI special counsel investigation into Russian interference in the 2016 election, Warren’s address indicated she was more interested in dealing with “kitchen-table” issues such as the economy, minimum wage, health care and education.

“Tackling head-on costs crushing middle-class families -- health care, education -- those are the investments we need to make as a country,” she said, saying rising costs and flat wages had “hollowed out” the middle class.

“We need to return politics to the people,” she said.

Warren also took time to talk about her achievements in the Senate, including the formation of the Consumer Finance Protection Bureau (CFPB) as part of the Dodd-Frank financial reform. She also told the crowd about how she worked with Republicans to get a bill through Congress that resulted in lower prices for hearing aids.

Warren brings more experience in the Senate to the table that some of the other top-tier candidates who are flirting with the idea of getting into the race. But she has also faced criticism from the right and the left for the handling of her claims of Native American ancestry -- particularly her release in October of DNA test results that showed only a trace amount of Native American heritage.

It was the first question she faced from the audience on Saturday, and one she seemed prepared for as she made it clear that she was not part of any tribe.

In her one reference to the current occupant of the White House, she brushed off the criticism she received over the DNA controversy from President Trump. 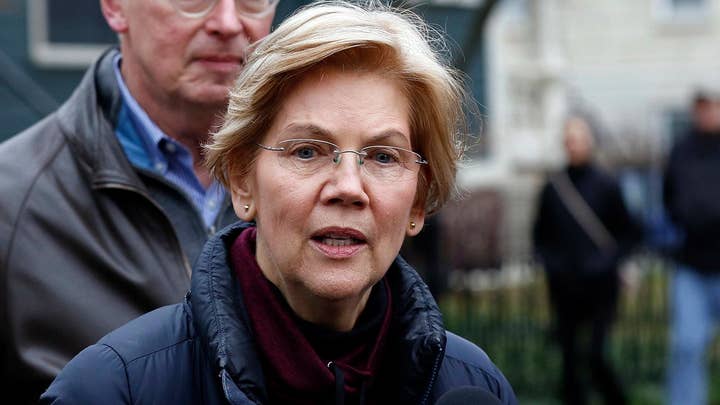 “I can’t stop Donald Trump from what he’s going to do, I can’t stop him from hurling racial insults, I don’t have any power to do that, but what I can do is I can be in this fight for all of our families,” she said.

On Friday, she appeared in Council Bluffs and said that “America is only working for those on the top” and called for top-to-bottom change.

“This is the moment we need to make big structural change in this country,” she said.

She said her motivation came from being grateful for the opportunities she had to become a Harvard law professor and later a senator, after an upbringing in Oklahoma that saw her father become a janitor and her mother support the family on a minimum wage job.

“I am grateful to America, down to my toes,” she said.