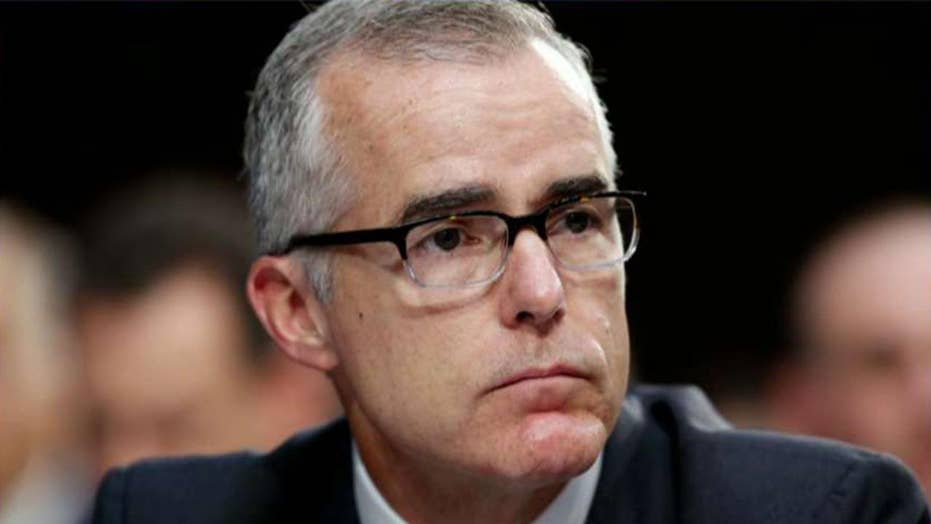 Judge Jeanine sits down one on one with Rep. Jim Jordan to discuss Andrew McCabe's potential indictment.

A federal judge has given the Department of Justice an ultimatum regarding former acting FBI Director Andrew McCabe: file charges or drop their probe of whether McCabe lied to investigators about an FBI media leak.

During a Monday hearing in a lawsuit from Citizens for Responsibility and Ethics in Washington (CREW) over internal FBI records related to McCabe’s termination, Judge Reggie B. Walton said if the DOJ does not make up its mind by Nov. 15, he will order the documents to be released.

“It’s been a long time and this is just dragging too long,” Walton said, according to The Washington Post, which obtained a transcript of the hearing. “And those who have to make these hard decisions need to do it. And if they don't, I'm going to start ordering the release of information.”

Walton told the DOJ prosecutors, "You all have got to cut and make your decision. It’s not a hard decision, and I think it needs to be made.”

McCabe was fired on March 16, 2018, days before he was set to retire, after the DOJ’s Inspector General’s office and the FBI’s Office of Professional Responsibility both found that he "lacked candor," providing false information when speaking with investigators regarding a leak to the media related to an investigation of the Clinton Foundation.

CREW filed a Freedom of Information Act lawsuit in July 2018. The DOJ claimed that certain documents were protected under the exemption for records compiled for law enforcement purposes, where production could interfere with law enforcement proceedings.

Weeks prior to Walton's warning, a federal grand jury reportedly had met regarding McCabe's case but did not issue an indictment, leaving the future of a potential case up in the air.

Walton called for the Justice Department to act one way or the other.

"Our public does have a right to know what’s going on," he said.

Last month, attorneys for McCabe called on the Justice Department to “immediately” close what they called a “fatally flawed” investigation.