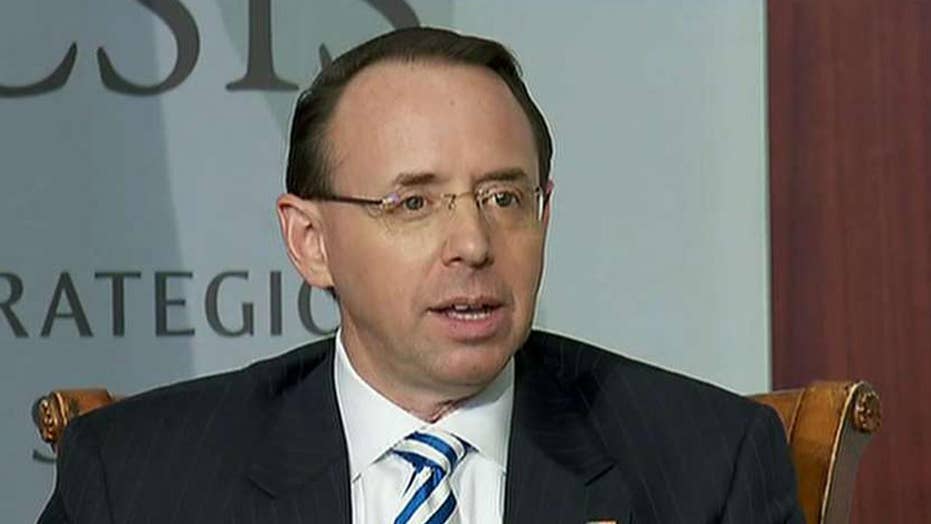 Rosenstein suggested he could wear a wire into the White House; Catherine Herridge has the details.

A newly released two-page memo written by then-Acting FBI Director Andrew McCabe outlined how former Deputy Attorney General Rod Rosenstein proposed wearing a wire in the White House "to collect additional evidence on the president’s true intentions," and thought the scheme was plausible because "he was not searched when he entered the White House."

The contemporaneous memo, which the Justice Department released after a transparency lawsuit by Judicial Watch, provided the strongest documentary evidence to date to undercut previous claims by DOJ officials that Rosenstein was joking when he apparently made the suggestion.

McCabe said in the partially redacted memo – written May 16, 2017, on the eve of Special Counsel Robert Mueller's appointment -- that Rosenstein offered to wear a recording device to gather evidence on the firing of former FBI Director James Comey and related matters. McCabe noted that he took Rosenstein's suggestion seriously enough that "I told him that I would discuss the opportunity with my investigative team and get back to him."

The DOJ and White House have separately rejected McCabe's claims outright and called his credibility into question.

"As our conversation continued, the DAG proposed that he could potentially wear a recording device into the Oval Office to collect additional evidence on the president’s true intentions," McCabe wrote in the memo. "He said he thought this might be possible because he was not searched when he entered the White House."

Also in the memo, McCabe -- he'd just taken over as acting head of the FBI -- said he began the lunch-hour meeting by informing Rosenstein that he had opened an investigation into the president concerning possible collusion and obstruction.

"I began by telling him that today I approved the opening of an investigation of President Donald Trump," McCabe wrote. "I explained that the purpose of the investigation was to investigate allegations of possible collusion between the president and the Russian government, possible obstruction of justice related to the firing of FBI Director James Corney, and possible conspiracy to obstruct justice."

When Rosenstein pushed for specifics, McCabe cited a disputed NBC News interview in which Trump emphasized that he was not firing Comey to obstruct any investigation, but also acknowledged that Comey's handling of the Russia probe was on his mind at the time.

"Regarding the obstruction issues, I made clear that our predication was based not only on the president's comments last week to reporter Lester Holt (that he conne¢ted the firing of the director to the FBl's Russia investigation), but also on the several concerning comments the president made to Director Corney over the last few months," McCabe wrote.

In May 2017, then-Acting FBI Director Andrew McCabe told Rod Rosenstein that he had opened a probe into the president -- based in part on a disputed Lester Holt interview. (AP Photo/Alex Brandon, File)

In his interview with Holt, Trump stated, "And in fact, when I decided to just do it [fire Comey], I said to myself — I said, you know, this Russia thing with Trump and Russia is a made-up story. It’s an excuse by the Democrats for having lost an election that they should’ve won.”

However, conservative commentators argued that Trump's comments to Holt were, in context, seemingly exculpatory. For example, Trump also told Holt that he was aware that firing Comey might "even lengthen out the investigation, but I have to do the right thing for the American people. He’s the wrong man for that position.”

Trump additionally explicitly rejected Holt's suggestion that he was trying to send a message to future FBI directors that they should back off: “No, I’m not doing that. I think we have to get back to work. But I want to find out, I want to get to the bottom – if Russia hacked, if Russia did anything having to do with our election, I want to know about it."

McCabe did not mention either of those Trump statements in his memo.

Responding to the claim that Rosenstein may have sought to wear a wire, Trump told Fox News earlier this year that he had his doubts.

"I'd much rather have you ask him that question," Trump said, referring to Rosenstein. "It sounds a little bit far-fetched, frankly, but a lot of things in this case are far-fetched."

Rosenstein did not respond to multiple requests by Fox News for comment.

In the main, McCabe's writings in the memo square with what he has said publicly about Holt's interview with Trump, as well as Rosenstein's actions. McCabe, speaking to CBS News' "60 Minutes" earlier this year, mentioned that Rosenstein was not joking when he floated the idea of wearing a wire to gather evidence, and had suggested Trump could be removed under the 25th Amendment.

The memo's release comes as U.S. Attorney Jessie Liu earlier this month recommended moving forward with charges against McCabe. McCabe appealed the decision all the way up to Deputy Attorney General Jeffrey Rosen, who ultimately rejected that request.

McCabe served at the FBI for 21 years. He became the acting director in May 2017 after Trump fired Comey.

Former Attorney General Jeff Sessions fired McCabe in March 2018 after the inspector general found he had repeatedly misstated his involvement in a leak to The Wall Street Journal regarding an FBI investigation into the Clinton Foundation.

The IG report faulted McCabe for leaking information to then-Wall Street Journal reporter Devlin Barrett for an Oct. 30, 2016, story titled “FBI in Internal Feud Over Hillary Clinton Probe.” The story -- written just days before the presidential election – focused on the FBI announcing the reopening of the Clinton investigation after finding thousands of her emails on a laptop belonging to former Democratic Rep. Anthony Weiner, who was married to Clinton aide Huma Abedin.