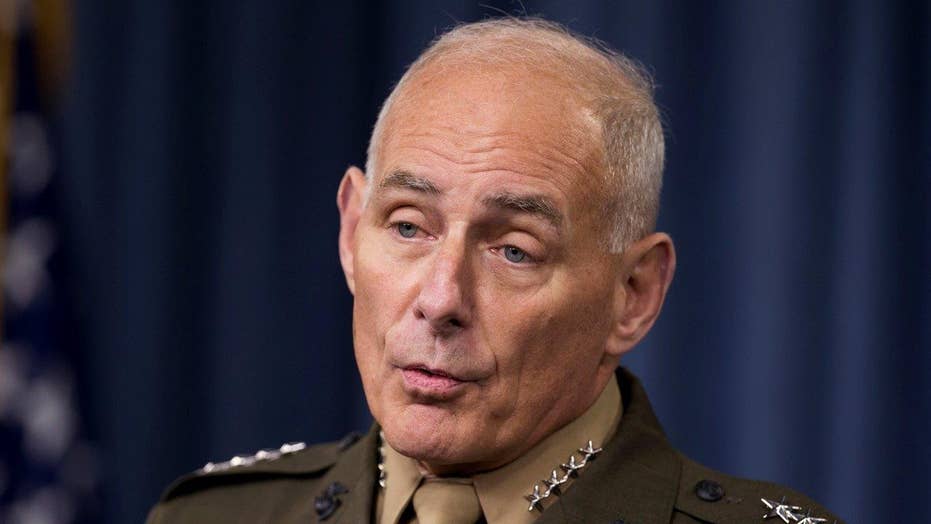 What does General Kelly bring to Cabinet position?

President-elect Donald Trump’s decision to tap retired Gen. John Kelly for secretary of Homeland Security has immigration hawks cautiously optimistic the incoming president is holding to campaign vows to tighten border security -- even as he dials back his rhetoric.

The four-star general is known for a tough approach on drug cartels, human trafficking and other scourges along the southern border. When he served as head of U.S. Southern Command from 2012-15, he cited border weaknesses as a security and terror threat, and complained he had the authority to watch drug dealers head to the border by sea but could not intercept them.

“While there is not yet any indication that the criminal networks involved in human and drug trafficking are interested in supporting the efforts of terrorist groups, these networks could unwittingly, or even wittingly, facilitate the movement of terrorist operatives or weapons of mass destruction toward our borders, potentially undetected and almost completely unrestricted,” he said in testimony to the Senate Armed Services Committee in 2015.

Dan Stein, president of the Federation for American Immigration Reform, gave a full-throated endorsement of Kelly in a statement Wednesday.

"General Kelly has spent his life defending our nation and fully understands the critical role border security plays in protecting the country from the threats of terrorism, uncontrolled illegal immigration, and drugs. He will bring a renewed commitment to controlling our borders and ensuring the safety of the American homeland," Stein said.

The DHS secretary would oversee several immigration-related agencies including Immigration and Customs Enforcement, Customs and Border Protection, and U.S. Citizenship and Immigration Services.

Some immigration hardliners had been hoping Trump would nominate for the DHS post Kansas Secretary of State Kris Kobach -- the architect of Kansas voter identification laws, including a 2013 requirement for new voters to provide papers documenting their U.S. citizenship when registering.

In the same statement, Stein called for Trump to appoint Kobach to another key position in the administration.

Others questioned where Kelly stands on immigration issues that go beyond border security.

“Our bigger issue has been the overall immigration picture, how are numbers of immigrants affecting American workers – and we don’t have any idea of where he is on that,” Rosemary Jenks, director of Government Relations for NumbersUSA, told FoxNews.com.

“We would have liked someone like Kris Kobach, as we know where is he is where he is on issues. But we will work with Kelly and try to help bring him up to speed,” she said.

Anti-illegal immigration groups were perhaps more enthusiastic about the pick of Sen. Jeff Sessions, R-Ala., for attorney general. Sessions has played a key role in Republican proposals to secure the border and limit the number of immigrants coming into the country.

Sessions was also an early supporter of Trump during the 2016 campaign, as the unconventional presidential candidate made immigration a signature issue, vowing to build a wall along the U.S.-Mexico border and make Mexico pay for it, in addition to stepping up deportations and cracking down on so-called sanctuary cities.

Not all signs are pointing to a tough line on immigration from the incoming Trump administration. Sources confirmed Thursday that Trump will pick CKE chief executive Andrew Puzder for Labor Secretary. Puzder has advocated repeatedly for immigration reform bills and said in a Wall Street Journal op-ed that deporting 11 million immigrants was “unworkable.”

Mark Krikorian, executive director of the Center for Immigration Studies, told FoxNews.com that Puzder is “probably the worst person you could think of for this job.”

“Jeb Bush may have blushed picking this guy,” he said.

“We are very concerned about the labor secretary,” agreed Jenks.

Trump also has adopted a softer tone toward “Dreamers” – those who were brought to the U.S. illegally at a young age.

"We're going to work something out that's going to make people happy and proud," Trump said in an interview with Time magazine. "They got brought here at a very young age, they've worked here, they've gone to school here. Some were good students. Some have wonderful jobs. And they're in never-never land because they don't know what's going to happen."

To understand the jumpiness of those in the immigration wing of the party, it is necessary to understand their central concern with the status quo – that political elites in both parties have pledged to toughen enforcement, only to appease corporate donors in seeking broader legalization.

“For decades, the American people have begged and pleaded for a just and lawful system of immigration that serves their interests—but their demands are refused,” Sessions wrote in a 2015 policy handbook sent to GOP members.

At the same time, "amnesty" advocates still have not succeeded in passing a broader reform package that includes a pathway to legal status or citizenship for illegal immigrants.

“I’m not resigned," Krikorian said when asked about the state-of-play with immigration overhauls in the Trump administration. "I think we’re going to achieve some constructive measures, but it’s much more touch-and-go than other areas like environmental regulations or corporate taxes or Supreme Court justices, where the outcome is more likely to be the right one.”