Rep. Ilhan Omar, D-Minn., on Thursday accused Israeli Prime Minister Benjamin Netanyahu of implementing his own “Muslim ban” after his government said it would block her and another Democratic congresswoman from entering Israel.

The move – announced shortly after President Trump tweeted that it would "show great weakness" to allow them in – has ignited a massive outcry from Washington Democrats, as Netanyahu's government stands by the decision arguing the U.S. lawmakers have an ulterior, anti-Israel agenda.

“It is an affront that Israeli Prime Minister Netanyahu, under pressure from President Trump, would deny entry to representatives of the U.S. government,” Omar said in a statement. “Trump’s Muslim ban is what Israel is implementing, this time against two duly elected members of Congress.”

Both Omar and Rep. Rashida Tlaib, D-Mich., the other lawmaker barred by Israel, are Muslim. They are also outspoken critics of Israel and have expressed support for boycotts of the country. In a tweet, Tlaib ripped the decision as "a sign of weakness."

In her statement, Omar defended her desire to travel to the region, saying the trip is intended to be educational.

“Denying entry into Israel not only limits our ability to learn from Israelis, but also to enter the Palestinian territories," Omar said. "Sadly, this is not a surprise given the public positions of Prime Minister Netanyahu, who has consistently resisted peace efforts, restricted the freedom of movement of Palestinians, limited public knowledge of the brutal realities of the occupation and aligned himself with Islamophobes like Donald Trump.”

Netanyahu, explaining the decision at length on his office's Twitter account, said that Tlaib and Omar's itinerary "revealed that they planned a visit whose sole objective is to strengthen the boycott against us and deny Israel's legitimacy." 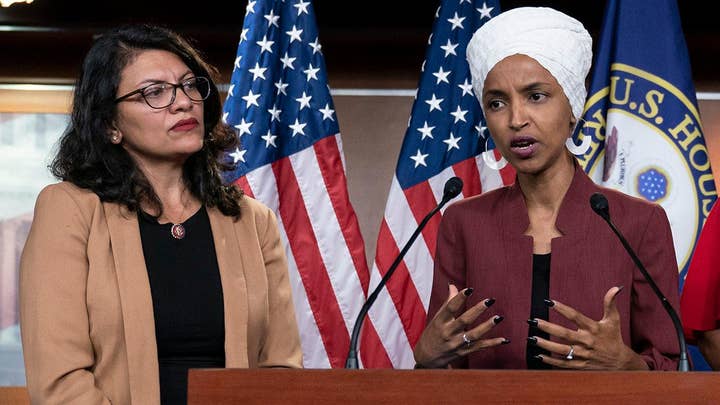 Netanyahu said their travel plans referred to a trip to "Palestine," not Israel, and the congresswomen were not interested in meeting with Israeli officials. He went on to note that the Palestinian organization that planned the visit, MIFTAH, supports the boycott movement, and that people associated with the group have supported terror against Israel in the past.

He said Israel welcomes critics with the exception of those who support boycotts of the Jewish State.

Omar and Tlaib had planned to visit Jerusalem and the West Bank on a tour organized by a Palestinian organization aimed at highlighting the plight of the Palestinians. Tlaib's family immigrated to the United States from the West Bank, where she still has close relatives.

Shortly before the decision was announced, Trump had tweeted that "it would show great weakness" if Israel allowed them to visit. "They hate Israel & all Jewish people, & there is nothing that can be said or done to change their minds," he said, calling the two congresswomen "a disgrace."

Other Democrats in the U.S. Congress denounced Israel's decision.

Top ranking Senate Democrat Chuck Schumer, D-N.Y., said it was a sign of weakness instead of strength and "will only hurt the U.S.-Israeli relationship and support for Israel in America."

A close colleague of Omar and Tlaib -- New York Rep. Alexandria Ocasio-Cortez -- tweeted that Netanyahu’s "discriminatory decision" to ban members of Congress from Israel "harms" diplomacy. She said she would not visit Israel "until all members of Congress are allowed."

House Speaker Nancy Pelosi, D-Calif., similarly said: “Israel’s denial of entry to Congresswomen Tlaib and Omar is a sign of weakness, and beneath the dignity of the great State of Israel.”

"Banning Congresswomen Omar and Tlaib from entering Israel and Palestine is a sign of enormous disrespect to these elected leaders, to the United States Congress, and to the principles of democracy," presidential hopeful Sen. Bernie Sanders, I-Vt., said in a tweet. "The Israeli government should reverse this decision and allow them in."

Meanwhile, some Republicans and staunch Israel allies also criticized Israel's decision. Pro-Israel lobby AIPAC tweeted that while they disagree with Omar and Tlaib's positions, "We also believe every member of Congress should be able to visit and experience our democratic ally Israel firsthand."

Republican Sen. Marco Rubio tweeted that, “I disagree 100% with Reps. Tlaib & Omar on #Israel & am the author of the #AntiBDS bill we passed in the Senate ... But denying them entry into #Israel is a mistake.” Omar and Tlaib were among 17 members of Congress who voted against a resolution condemning the Boycott, Divestment and Sanctions (BDS) movement in July.

Added Rubio: “Being blocked is what they really hoped for all along in order to bolster their attacks against the Jewish state.”

Fox News’ Brie Stimson and Ronn Blitzer and The Associated Press contributed to this report.