McCarthy came to Congress more than two decades ago after gunman Colin Ferguson killed her husband and injured her son in the Long Island Rail Road shooting in the fall of 1993. Upon her election, McCarthy became the leading voice in Congress on firearms.

McBath will enter Congress with a similar tale. Her teenage son Jordan Davis was shot and killed in what is regarded as a racially-motivated killing in Florida in November 2012. A jury convicted Michael Dunn in the killing. He’s now serving a life sentence.

So now McBath comes to Washington – with a similar life experience as McCarthy. Granted, other lawmakers have campaigned on tightening up firearms laws, like Rep. Robin Kelly, D-Ill., and Sen. Chris Murphy, D-Conn. There was a huge march in Washington earlier this year after the Parkland, Fla., massacre. Democratic politicians argued that somehow, after Columbine and Tucson and Sandy Hook and Aurora and Las Vegas, that Parkland was different.

There was the Pittsburgh synagogue slaughter just before the midterms. Two days after the election, we added Thousand Oaks, Calif., to the roster. 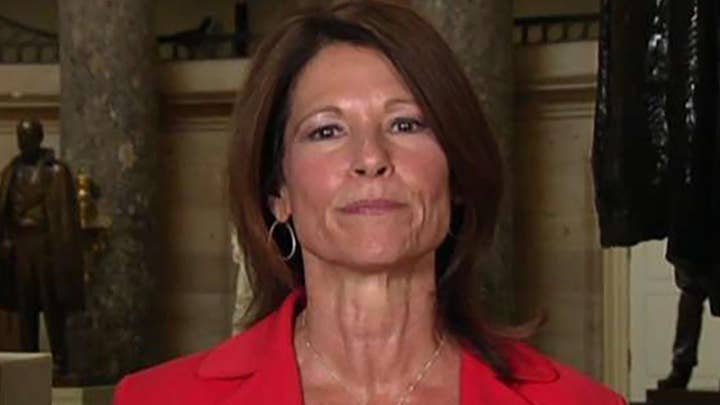 But there will be fewer Democrats in the Senate next year. And those who were re-reelected – like moderate Democratic Sen. Joe Manchin, D-W.Va., – have a very different view of gun control than urban liberals. It’s unclear if Sen. Bill Nelson, D-Fla., will retain his seat against Florida Republican Gov. Rick Scott. Parkland prominences Emma Gonzalez and David Hogg have long criticized Scott. Granted, the NRA downgraded Scott’s gun rating after the Parkland butchery. But if Scott prevails over Nelson, gun control advocates may have lost ground in their efforts in the Senate. That’s remarkable when so many characterized Parkland as the seminal moment in the gun control battle.

Just how seminal was it after all?

There were all of the TV interviews. All of the heart-rending stories. The big rally on Pennsylvania Ave. in the shadow of the U.S. Capitol.

If those who wish to curb gun rights can’t even defeat the sitting governor of the state where the most recent major school shooting unfolded, how much progress did they make really?

This is why the victory by McBath in Georgia deserves scrutiny by firearm control advocates.

McBath defeated Rep. Karen Handel, R-Ga., who narrowly won a special election last year over Democrat Jon Ossoff. Who represented the district before Handel? Former Rep. Tom Price, R-Ga. Price resigned his seat to become Health and Human Services Secretary. In his last three congressional races, Price won with 64 percent of the vote in 2012, 66 percent in 2014 and 61 percent in 2016.

A former Delta Airlines flight attendant, McBath campaigned on health care, reproductive rights, and fair tax cuts. She didn’t focus exclusively on firearms. But McBath’s campaign made it clear that, much like Carolyn McCarthy 22 years ago, she decided to run because of the shooting death of her son. McBath wants to close loopholes in background check laws and raise the age to legally purchase weapons to 21.

If Democrats are ever going to make inroads on gun policy, this is the type of district which they must flip from red to blue.

However, the Senate is another enterprise altogether.

There is almost no way gun control activists would make any headway whatsoever in this midterm in the Senate.

But a place like Texas is precisely where those pushing for gun policy changes need to win if they are ever to make changes on this issue.

That said, Mississippi is a place where Democrats might yet have a chance in a Republican stronghold. Sen. Cindy Hyde-Smith, R-Miss., faces a runoff against Democrat and former Rep. Mike Espy, D-Miss., later this month. Again, gun control really isn’t an issue in the Mississippi Senate race. And even if Espy wins the runoff, he might not exactly be the guy gun reform activists are looking fore. The NRA awarded Espy its “Silver Rifle” award more than a decade ago.

Keep in mind, Democrats just don’t need to win control of the Senate in order to make up some ground on the gun issue. They need to get close to 60 votes in the Senate to have a snowball’s chance of doing anything. Sixty votes is the threshold required in the Senate to overcome a filibuster on legislation.

Many on the right are now critical of Democrats for blowing their chance on guns some years ago. After the 2008 elections, Democrats wielded control of the House, boasted 60 Democratic votes in the Senate and President Obama occupied the White House. This was long before Sandy Hook, San Bernardino, Aurora, Las Vegas and Parkland.

Democrats poured most of their efforts into health care reform – producing ObamaCare.

Like it or not, health care reform reached a critical mass in 2009 and 2010. Unbelievably, for all the noise about firearms, maybe the gun issue hasn’t bubbled to a legislative head yet. That is apparently even the case after the 2011 shooting that wounded former Rep. Gabrielle Gifford, D-Ariz., and her aide and later Rep. Ron Barber, D-Ariz. That was followed by the shooting of House Majority Whip Steve Scalise, R-La., at the congressional baseball practice last year.

After Vegas and Parkland, there was a lot of chatter about the gun issue evolving ahead of this year’s midterm elections.

Well, the midterms have come and gone. There is some incremental change on firearms policy in the House. But that’s about it.