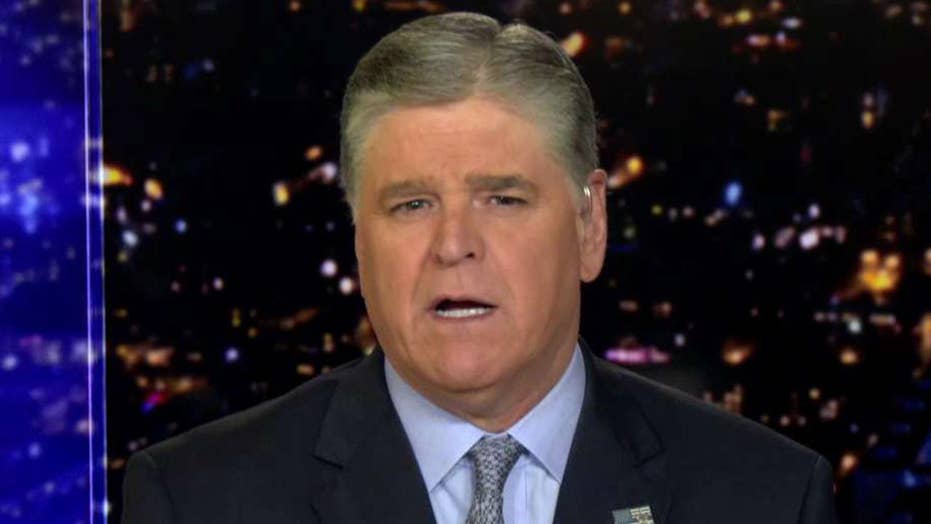 Fox News’ Sean Hannity said Wednesday that a Clinton operative was charged by Special Counsel Robert Mueller with leading the hiring effort for the Russia investigation and warned that former intelligence officials are scared of the current Justice Department investigation into the origins of Mueller's probe.

"Guess what? The pit bull of Robert Mueller, Andrew Weissman, he was tapped by Mueller to lead the entire hiring effort for the Special Counsel's witch-hunt," Hannity said during his show's opening monologue. "That's right, Andrew Weissman of all people. Now we know why Mueller's team was filled with, oh, far left Clinton allies, zero Republican donors."

US ATTORNEY JOHN DURHAM HAS BEEN REVIEWING ORIGINS OF RUSSIA PROBE 'FOR WEEKS': SOURCE

"After all, the same Andrew Weissman, he was attending Hillary Clinton's election night party that never happened."

Hannity questioned why Mueller would make such a "partisan" choice and said Weissman's history explains why the report ultimately found "nothing."

"Why did Mueller hire this guy?" Hannity asked. "Don't forget, he is the guy who put four Merrill executives in jail for a year. That case was overturned by the Fifth Circuit [Court of Appeals]. One year of four people's lives ruined. Yet Bob Mueller appointed him to be the most powerful person in this entire witch-hunt investigation which at the end of the day, frankly, in retrospect, gives so much more weight to the fact that they found nothing."

The host added, "Now, make no mistake, Mueller's hyperpartisan team of investigators, they were hell-bent on taking down a duly elected president of the United States. They were no different than many other high ranking unelected government bureaucrats in the deep state."

According to sources familiar with the latest investigation, U.S. Attorney John Durham has been working on his review of the Russia probe “for weeks.”

Durham is expected to focus on the period before Nov. 7, 2016 — including the use of FBI informants as well as alleged improper issuance of Foreign Intelligence Surveillance Act (FISA) warrants. Durham was asked to help Barr “ensure that intelligence collection activities by the U.S. Government related to the Trump 2016 Presidential Campaign were lawful and appropriate.”

Later in his monologue, Hannity played a clip of radio host Rush Limbaugh, who claimed that former FBI director James Comey and former Director of National Intelligence James Clapper are nervous of the investigation, and joked that they may try to run.

"The next thing to keep a sharp eye out for, folks, and that is people fleeing the country. If you see James Comey in Argentina, if you see James Clapper somewhere where they can't be extradited, then you will know that we are getting close," Limbaugh told his audience. "When these people start leaving, I'm half joking, it hasn't started yet. But man, are they nervous because the attorney general has appointed a prosecutor to look into the investigation."