White House is planning for a possible government shutdown

President Trump believes the politics over illegal immigration are a distraction technique employed by Democrats.

The deadline arrived without a deal. The U.S. government shut down at midnight Friday after Congress failed to overcome a partisan divide over immigration and spending.

In a late-night vote, Senate Democrats joined to block a bill that would have kept the government running until mid-February. A flurry of last-minute negotiations failed to produce an agreement.

Democrats tried to use the Friday night funding deadline to win concessions from Republicans, including an extension of DACA, an Obama-era program protecting some young immigrants from deportation. The program is set to expire in March. Republicans sought more time for talks, but Democrats refused.

The shutdown is only the fourth government closure in a quarter-century. It will only partially curb government operations.

Uniformed service members, health inspectors, and law enforcement officers are set to work without pay. But Social Security and most other safety net programs are unaffected.

If no deal is brokered by Monday, hundreds of thousands of federal employees are set to be furloughed.

The White House and Capitol Hill will be working with skeleton staffs, but some government agencies, like the Environmental Protection Agency, have said they were able to shift funding around to keep most workers on the job. National parks and federal museums will be open, but with potentially reduced services.

Earlier Friday night, President Donald Trump seemed pessimistic that a deal could be reached in time.

"Not looking good for our great Military or Safety & Security on the very dangerous Southern Border," the president tweeted. "Dems want a Shutdown in order to help diminish the great success of the Tax Cuts, and what they are doing for our booming economy."

Earlier in the day, demonstrators were seen protesting in support of the Deferred Action for Childhood Arrivals (DACA) program in the Russell Senate Office Building. Democrats refused to back a short-term spending bill unless it includes protections for illegal immigrants brought to the country as children.

"Republicans – who control the House, Senate, and WH – are on the verge of making #TrumpShutdown a reality because they refuse to protect DREAMers and provide long-term certainty for our military, the opioid crisis, CHIP, and other key issues," House Minority Leader Nancy Pelosi tweeted late Friday night.

During the day Friday, Schumer met with President Trump at the White House as part of an effort to avert the imminent shutdown.

That meeting came as the White House coined a decidedly Trumpian phrase in the battle to assign blame for the standoff, branding it the "Schumer Shutdown."

A senior White House official told Fox News that the Trump-Schumer meeting was productive, but there was no deal yet. Still, the president labeled the meeting "excellent" in a tweet.

"Making progress," Trump wrote, adding that a "four week extension would be best!"

“We had a long and detailed meeting," Schumer said in a statement. "We discussed all of the major outstanding issues, we made some progress, but we still have a good number of disagreements. The discussions will continue.”

According to a White House source, Schumer arrived in the Oval Office and presented the president with a list of demands on domestic issues that went well beyond just DACA. The president listened to Schumer and appeared perplexed as Schumer rattled off his agenda items, the source said. The president told Schumer he wasn’t going to get all of those demands in a spending bill. 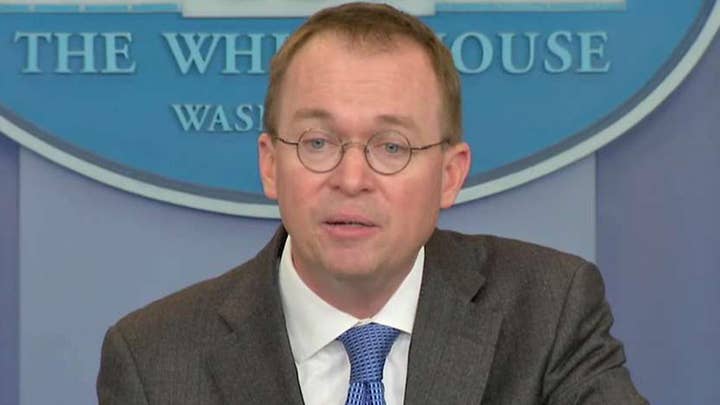 Schumer, the source said, did appear open to considering a continuing resolution that would keep the government funded for five days. The official White House position is still a 30-day extension.

Office of Management and Budget Director Mick Mulvaney on Friday accused the Democrats of opposing a bill that contains nothing they are against.

“They don’t oppose anything in the bill, but they are opposing the bill,” Mulvaney said, pointing to popular measures in the bill such as funding for the Children's Health Insurance Program (CHIP).

Democrats seemed to be aware of the importance of messaging, with Sen. Ed Markey, D-Mass., taking to the Senate floor with an image declaring the logjam a "Trump Shutdown," quoting a tweet from President Trump from May saying "our country needs a good 'shutdown.'"

Markey blasted Republicans complaining about the threat of a shutdown, telling them to "spare me your crocodile tears."

The Republican-dominated House of Representatives passed a one-month bill Thursday night by a vote of 230-197 that broke down largely along party lines, with 11 Republicans voting no and six Democrats voting yes.

Senate Democrats have said that Democrats want any spending bill to include a fix for DACA. Trump repealed the order in September, and gave Congress a deadline of March to come up with a legislative fix.

Chris Wallace: A government shutdown 'could last a while'

'Fox News Sunday' anchor weighs in on the shutdown showdown and latest negotiations to fund the government.

“Unless we pass the #DreamAct, I won’t support another short-term funding bill,” Sen. Dick Durbin, D-Ill., tweeted Thursday. “Our Dreamers have waited far too long for a chance to be a part of this country’s future.”

Republicans had hoped to back Democrats into a corner by attaching a six-year CHIP extension to the bill. But Democrats have so far refused to budge.

Republicans have repeatedly put the blame firmly on Democrats’ positioning on DACA as the reason for the looming shutdown.

“Apparently they believe the issue of illegal immigration is more important than anything else, than the government services the American people depend on,” McConnell said.

President Trump has repeatedly urged Congress to keep the government open, warning that a shutdown will harm the U.S. military. The White House announced that Trump would not travel to Florida, as previously scheduled, until the continuing resolution is signed.

Should Congress miss the Friday night deadline, it is far from clear if the government will actually shut down immediately. Fox News is told that the Trump administration will not “weaponize” the shutdown, closing various monuments and national parks, to create a "show" as critics say the Obama administration did in a 2013 closure.