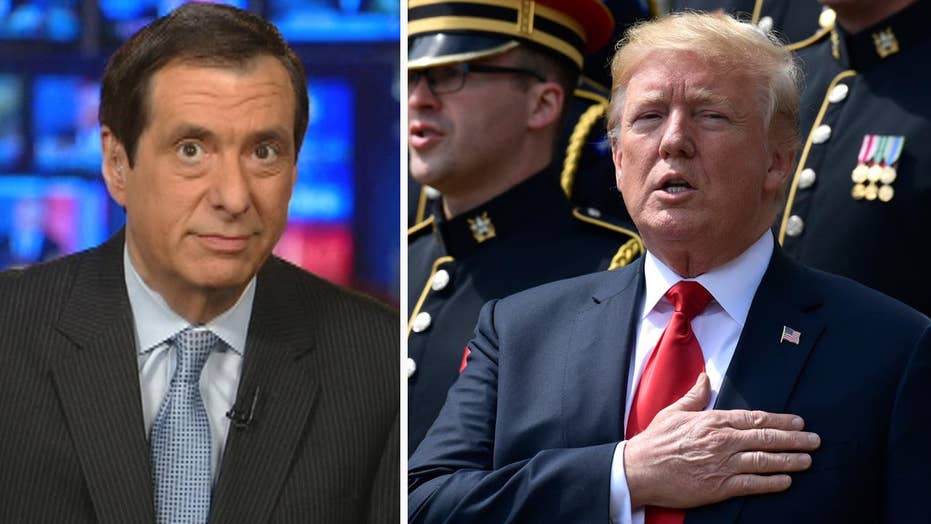 Kurtz: Why Trump vs Philly wasn’t really about the anthem

'MediaBuzz' host Howard Kurtz weighs in on the media uproar after President Trump dis-invited the Philadelphia Eagles from visiting the White House.

On a day when we could be talking about Paul Manafort being accused of witness tampering, the president's claim that he can pardon himself, or his latest slam against Jeff Sessions, many of us are focused on football.

I'm not saying Trump disinvited the Philadelphia Eagles from yesterday's White House event just to change the subject. But let's just say it was a fringe benefit.

As with his original attack on the NFL over player protests, the president's rhetoric is divisive. His supporters are applauding the middle-finger salute to the Super Bowl champions, while many others see it as a less-than-gracious insult—for a team on which no one kneeled in protest last season.

At bottom, the contretemps is personal: The former USFL team owner was ticked off that most of the Eagles didn't plan on showing up, with fewer than 10 expected. In the way he views the world, he was retaliating for a blatant dis. The last thing he wanted was a White House party with empty seats.

The Trump tweet put it this way: "The Philadelphia Eagles Football Team was invited to the White House. Unfortunately, only a small number of players decided to come, and we canceled the event. Staying in the Locker Room for the playing of our National Anthem is as disrespectful to our country as kneeling. Sorry!"

Yet the Eagles were not identified with such protests, which the NFL recently ruled will be subject to fines. And the criticism doesn't just come from liberal commentators. National Review's Jonah Goldberg tweeted that the attempt to tie the cancellation to the national anthem "is just a complete act of deceitful propaganda and conservatives should have zero to do with it."

But not all the fault lies with the White House. The visit was in trouble from the start.

Right after winning the Super Bowl, three Eagles—Torrey Smith, Malcolm Jenkins and Chris Long—said they had no intention of making the trip, according to Sports Illustrated. And ESPN reports that most if not all of Philly's black players had decided to skip the visit.

The White House says the Eagles tried last Friday to reschedule the visit—for a time when Trump would be out of the country—and accused the team of deciding to "abandon their fans."

There is pushback from the football franchise as well. Torrey Smith accused the White House of lying, tweeting that "no one refused to go simply because Trump 'insists' folks stand for the anthem" and that "the president continues to spread the false narrative that players are anti military." And Philadelphia Mayor Jim Kenney got in a shot by calling Trump "a fragile egomaniac obsessed with crowd size."

Keep in mind that Donald Trump is a culture-war president. Getting legislation through Congress is difficult, but taking on the kneeling NFL players worked for Trump by firing up his base, even as detractors felt he was trampling on the right to protest.

So when faced with the Eagles' mini-rebellion, the president reverted to what had worked for him—and knocked the Manafort story for a loss.

There's one other penalty flag to be thrown here. When "Fox News @Night" was covering the controversy Monday, the program aired footage of kneeling Eagles players—who were actually praying. This handed detractors ammunition to argue that it was done intentionally. Eagles tight end Zach Ertz accused the network of "propaganda."

Christopher Wallace, the show's executive producer, said in a statement: "During our report about President Trump canceling the Philadelphia Eagles' trip to the White House to celebrate their Super Bowl win, we showed unrelated footage of players kneeling in prayer. To clarify, no members of the team knelt in protest during the national anthem through the regular or post-season last year. We apologize for the error."