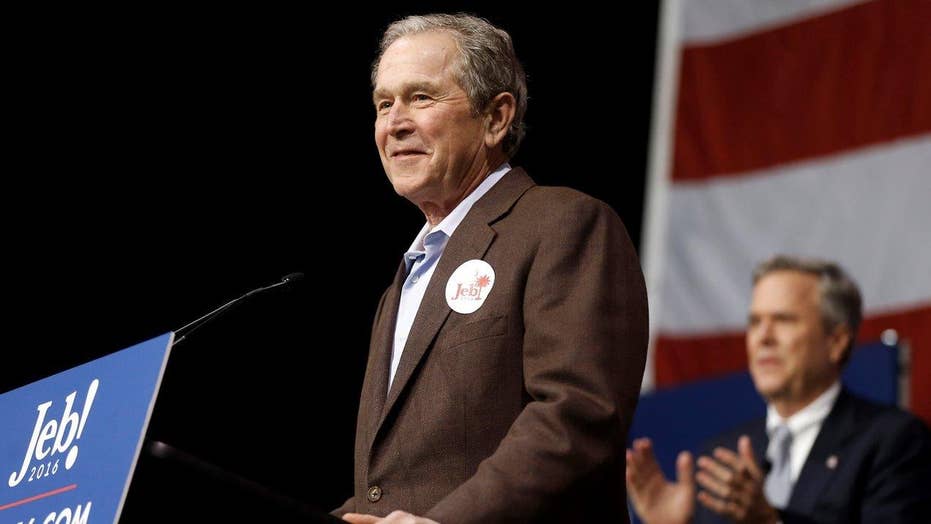 "We need to nominate someone who can win in November, all the talk doesn't matter if we can't win," George W. Bush told supporters. "We need someone who can take a positive message across the entire country."

In promoting his brother's past experience of dealing with recovering from eight hurricanes slamming Florida, Bush spoke of his own experience of being thrust into the role of a wartime president during the Sept. 11 attacks.

"I've seen Jeb in action. He'll be a strong and steady hand with dealing with the unexpected," he said.

While not bringing up any of the other candidates in the race, the former president said Americans are yearning for a "strong leader," but that in his opinion, strength comes from "integrity and character."

"The strongest person isn't the loudest in the room," he said.

In an exclusive interview with Fox News' Sean Hannity, George W. Bush said he found it "interesting" that foreign policy is a central campaign issue, unlike in the 2000 presidential election.

"I hope the voters take a look at who’s got the clearest-eyed view of the world, and who’s got a plan to deal with those who will do us harm," Bush told Hannity.

"I’ve looked at Jeb’s plan, I know how solid it is. The other thing that’s needed in the White House – and Jeb understands this – is you set a goal: defeat ISIS," he said. "Then you call upon the people who know how to help you achieve that goal, that would be the military and intelligence community. And Jeb respects them, and that’s what you really want."

"The lessons of 9/11 are being forgotten by a lot of people and that is [that] the human condition elsewhere matters to our national security," the 43rd president added. "If we let down our guard against this group of thugs, they will hurt us again. And the good thing is Jeb won’t let down his guard."

The plan is to boost the former Florida governor’s popularity ahead of this weekend’s South Carolina Republican primary. The move comes as Donald Trump turns up the heat on Jeb over his brother -- the country’s 43rd president -- and his legacy on Iraq and 9/11.

But as the gloves come off in the Republican race, some say it’s unclear whether Trump’s tactic to discredit the Bush administration and paint Jeb as a repeat president could backfire.

“In a normal election year, arguing that a former president of one’s party lied his way into a war would be political suicide, but in this year, it might show that Trump is more his own man than all of the other candidates,” Lara Brown, director of George Washington University’s political management program, told FoxNews.com.

“There is no state, outside of Texas, that has a stronger relationship with the Bush family,” she said.

Lee Atwater, who helped establish the South Carolina primary in 1980, was former President George H.W. Bush’s consultant in 1988, and his more than 25-point win there is what secured his path to the nomination, Brown said.

South Carolina also helped former President George W. Bush in 2000 bounce back from a loss he suffered in New Hampshire to Sen. John McCain, R-Ariz. Fast forward to today and the strong political ties to the Bush family still exist. For example, Sen. Lindsey Graham, a long-time friend of the Bush family, has already endorsed Jeb Bush for the 2016 run.

During Saturday night’s debate, the billionaire businessman delivered multiple blows to the Bush administration, blaming him for the War in Iraq and 9/11.

“The World Trade Center came down during the reign of George Bush,” Trump said Saturday. “He kept us safe? This is not safe.”

He then zeroed in on Iraq.

“The war in Iraq was a big, fat mistake,” Trump said. “They (the Bush administration) lied. They said there were weapons of mass destruction. There were none.”

“In other words, Trump wasn’t simply attacking former President George W. Bush’s decision to go to Iraq,” Brown said. “Instead, he was attacking all of the Republicans in South Carolina for standing by the Bush family. It should be a bridge too far.”

Jeb Bush denounced Trump for attacking his family, calling it a “blood sport.”

“I’m sick and tired of him going after my family,” Bush said.

Jeb Bush told CNN that “there’s a lot of interest in my brother coming.”

“He’s been helpful all along in a lot of different ways,” Bush said. “Giving me advice and helping me to raise money. Doing all sorts of things. But this is the appropriate time for him to do something he has not done before. This is the right time, when it’s important and when people are watching.”

Bush has been trailing in the polls and struggled in the first few debates to gain traction and air time while other candidates such as Trump and Texas Sen. Ted Cruz grabbed most of the headlines.

Bush was unable to convincingly carve out the narrative that he is his own man and not a replica of his father's and brother’s administrations.

Some strategists say the big return of W. to the campaign trail, which was once seen as a political liability, is now just the right shot of adrelienine Jeb Bush’s presidential campaign needs.

“The political calculus is very different now than what Jeb thought it would be a few months ago,” Flip Pidot, Republican strategist and CEO at American Civics Exchange told FoxNews.com’s Strategy Room.

“He needs something, even though (former President George W. Bush)” might not be “universally loved, even among Republicans,” Pidot said.

She added, “He’s got absolutely nothing to lose.”