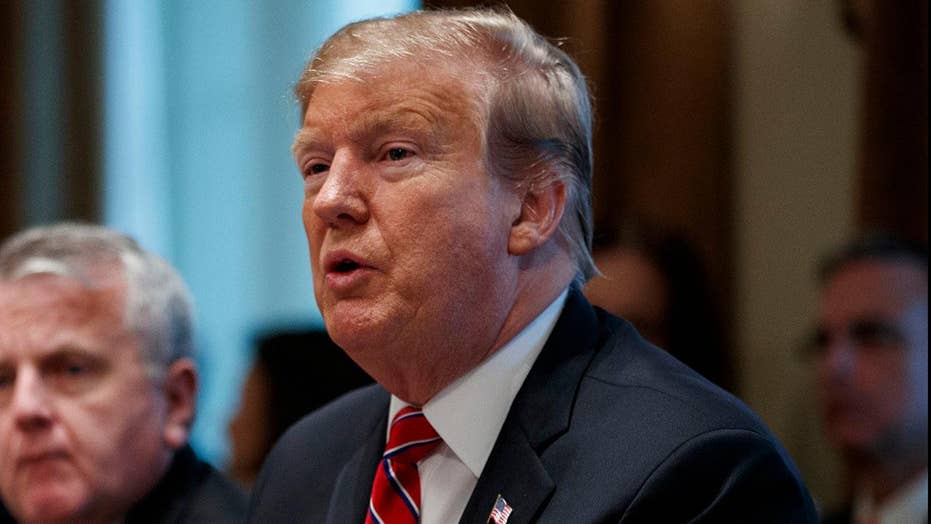 The president in no rush to sign off on a border deal aimed at avoiding another government shutdown; chief White House correspondent John Roberts reports.

Weld formally made the announcement Friday at "Politics and Eggs," a must stop in the first-in-the-nation primary state of New Hampshire for any White House hopeful.

“I am establishing an exploratory committee to pursue the possibility of my running for the presidency of the United States as a Republican in the 2020 election. I encourage those of you who are watching the current administration nervously but saying nothing to stand up and speak out,” Weld declared to the audience and a large gathering of local and national reporters.

Fox News reported on Wednesday that Weld, a very vocal Trump critic, would likely announce at "Politics and Eggs" that he was taking a step toward launching a longshot bid to unseat the president. The event kicked off a two-day swing by Weld through the state, meeting with GOP activists and former leaders.

Weld warned in his speech that “our country is in grave peril and I cannot sit quietly on the sidelines anymore.”

And he slammed Trump, claiming “we have a president whose priorities are skewed toward promoting of himself rather than toward the good of the country.”

Weld also described the president as “compulsive” and “irrational.”

And he lamented the state of the GOP, arguing “the president has captured the Republican Party in Washington. Sad. But even sadder is that many Republicans exhibit all the symptoms of Stockholm Syndrome, identifying with their captor.”

The former two-term Massachusetts governor during the 1990s switched parties and ran as the Libertarian vice presidential nominee in the 2016 election. But he recently re-registered as a Republican in Canton, the suburban Boston town where he resides.

Asked about his return to the GOP, he said: “I want to not dribble around the court but go right to the hoop and if you want to go one-on-one here, it’s got to be as an R.”

“It feels good to be back there with the R on my name but I will say I’m not rejoining the no-nothing party. I’m rejoining the party of Lincoln,” he added.

When an audience member asked whether Weld would support a Democrat in the 2020 general election if his likely primary challenge is unsuccessful, he answered, “I’m  not sure about that.”

Asked by Fox News if he was concerned his efforts could even help a Democrat win the election, Weld said, “I’m in the Republican primary and I’m going to say what I think the Republicans should do. I’m not going to worry about the Democrats now.”

Pointing to former Ohio Gov. John Kasich and Maryland Gov. Larry Hogan, who are mulling primary challenges, Weld said, “if I get traction and cracks appear in the dam of the president’s support, I think you may see a gold rush.”

Weld said he’s coming back to New Hampshire the following two weeks, for events at New England College and the University of New Hampshire.

“It will be a national campaign. There will be a lot of New Hampshire. I’m so close. I do have history in this state. Many former statewide officials in this state are good political friends of mine. You’ll see a lot of me,” he explained.

But while the president’s endured a rough few months – from the loss of the House GOP majority in November’s midterm elections to the political hits he took over the partial federal government shutdown – Trump remains popular with Republicans.

Anyone who does launch a primary challenge would be considered an extreme underdog who would have to face off against not only a hard-charging president but also a Republican Party that remains firmly supportive of the president.

The Republican National Committee recently kicked off its annual meeting winter by passing an unprecedented pledge giving the president “undivided support” even before he’s the official 2020 nominee. But the RNC didn’t consider a stronger resolution that would have endorsed Trump as the party’s 2020 nominee.

The New Hampshire GOP isn’t rolling out the welcome mat.

“He ran as a Libertarian vice presidential candidate in 2016. As far as we’re concerned he’s a Libertarian and he can’t flip-flop back and forth for political expediency,” newly elected state party chair Steve Stepanek told Fox News recently. “We don’t consider him a Republican. We don’t want him back as a Republican.”

Stepanek, who served as co-chair of Trump’s 2016 presidential campaign in New Hampshire, explained that “if there is a legitimate national Republican candidate, then under the bylaws I have to remain neutral. I’m not going to be supporting them by any means, I’m just not going to be going against them.”