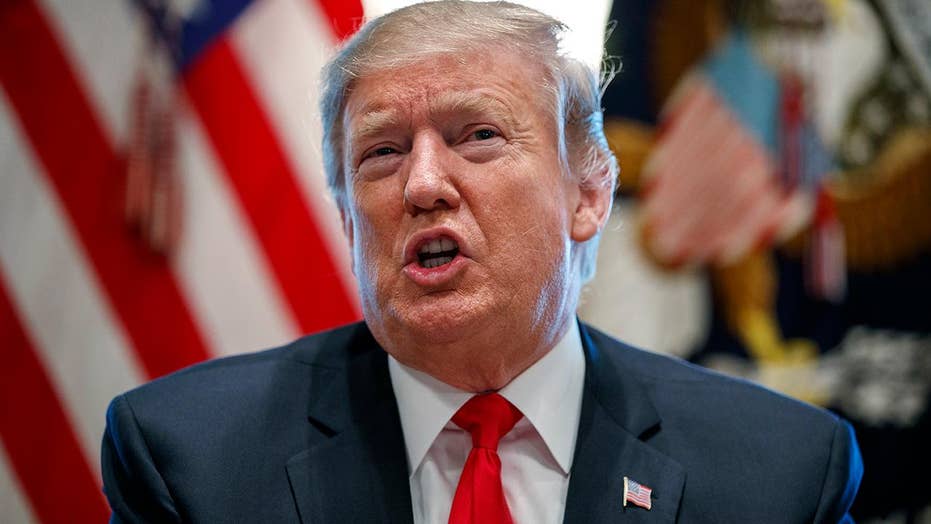 Talk of a possible Republican primary challenge to President Trump is kicking up once again, as the president grapples with the fallout from the partial government shutdown and other political turbulence.

Those who might challenge Trump remain, as they ever were, decided underdogs who would have to face off against not only a hard-charging president but the entire Republican Party infrastructure. None would be as well-known as Trump.

But from the party’s ideological center, a handful of Republicans are sending signals that they’re taking a possible primary run seriously.

A source close to Maryland Gov. Larry Hogan told Fox News that Hogan, “more than others, is really taking it seriously.”

And an email this week by former Ohio Gov. John Kasich’s political group reminded supporters that “many have suggested Gov. Kasich should run, and he is keeping all of his options on the table.”

With Trump coming under attack by some high-profile conservatives for ending the 35-day partial federal government shutdown without getting funding for a wall along the Mexican border, the perception in some corners of a weakened president is stoking the flames of a small but emboldened band of Republicans hoping for a viable primary challenge.

Pointing to the GOP’s loss of the House in the 2018 midterm elections, the departure of Defense Secretary James Mattis, the fluctuations in the stock market and the government shutdown, Kristol said “it’s a three-month period which has featured all kinds of events that have increased doubts and decreased confidence about a second-term Trump.”

The party, though, remains firmly behind the president. The Republican National Committee kicked off its annual meeting winter last Friday by passing an unprecedented pledge giving the president “undivided support” even before he’s the official 2020 nominee.

"The members just wanted to underscore, underline, highlight that we are here to re-elect President Trump and Republicans up and down the ballot," Cassie Smedile, RNC national press secretary, said after the vote.

The RNC didn’t consider a stronger resolution that would have endorsed Trump as the party’s 2020 nominee.

“It was a smart move by the Trump White House to do it and it is true that a very overwhelming majority of the 168 RNC members support President Trump’s re-election,” one GOP source explained, but added “it has no impact realistically on whether someone would challenge the president.”

The RNC’s action doesn’t seem to be stopping potential primary challengers from at least considering it.

Weld, a vocal Trump critic who ran as the Libertarian Party’s 2016 vice presidential nominee, appears to be mulling a potential longshot challenge against the president.

“I’m just not saying anything. If I have anything to say, I’ll say it on the 15th,” Weld told Fox News on Wednesday, referring to the upcoming New Hampshire visit.

The state GOP, though, won’t be rolling out the welcome mat.

“He ran as a Libertarian vice presidential candidate in 2016. As far as we’re concerned he’s a Libertarian and he can’t flip-flop back and forth for political expediency,” newly elected state party Chairman Steve Stepanek told Fox News. “We don’t consider him a Republican. We don’t want him back as a Republican.”

Stepanek, a businessman and former state lawmaker who served a co-chair of Trump’s 2016 presidential campaign in New Hampshire, explained that “if there is a legitimate national Republican candidate, then under the bylaws I have to remain neutral. I’m not going to be supporting them by any means, I’m just not going to be going against them.”

Gov. Larry Hogan delivers his annual State of the State address to a joint session of the legislature in Annapolis, Md., Wednesday, Jan. 30, 2019. (AP Photo/Patrick Semansky)

Hogan, who was re-elected last November to a second term as governor of the blue state of Maryland, isn’t ruling out a possible primary challenge either.

“I’m flattered that people are talking about that as a possibility, but it’s not something that I’m focused on,” he said Monday during a political panel moderated by PBS NewsHour anchor Judy Woodruff.

“Who knows what’s going to happen two years from now. You never know,” he answered when asked about 2020.

He explained that he’s heading soon to Iowa – the state that votes first in the presidential primary and caucus calendar – because he’s a vice chair of the National Governors Association.

“They have a meeting in Iowa,” he said.

Joining Hogan on the panel was Republican Gov. Chris Sununu of New Hampshire, which holds the first presidential primary.

“This is the second time I’ve seen the New Hampshire governor in two days. That doesn’t mean anything. I’m not sucking up to New Hampshire,” Hogan joked.

But a source close to Hogan said that when it comes to a primary challenge, “I think he thinks it’s the right thing to do. We’ll see if he really does it.”

He told Fox News at the time, “I really don’t know what I’m going to do.”

But he added that when it came to a possible primary challenge, “all the options are on the table.”

Two weeks ago, after finishing his second and final term as Ohio governor, Kasich signed with CNN as a senior political commentator.

Former New Hampshire Attorney General and longtime GOP consultant Tom Rath said the move gives Kasich “a bully pulpit” he could use in advance of any primary challenge.

“It’s a way to remain a part of the discussion, be part of the dialogue and he has a voice he wants to use to try to drive Americans to a better place,” added Rath, a senior adviser on Kasich’s 2016 campaign who remains close with the now-former governor.

Another launching pad for a possible primary challenge could be the Senate. There’s long been speculation that Sen. Ben Sasse of Nebraska is mulling a 2020 White House run. And don’t rule out newly elected Sen. Mitt Romney of Utah – the 2012 GOP presidential nominee and a vocal Trump critic.

One person who can be ruled out is former Sen. Jeff Flake. The Arizona Republican who’s frequently lambasted the president the past two years announced earlier this week that he would not be launching a 2020 presidential campaign and instead joined CBS News as a contributor.

If there is a credible challenge against Trump, New Hampshire – which allows independents to vote in either the GOP or Democratic contests – could be ground zero.

But he added that the government shutdown did “open the door” a bit to a challenge.

“There are phone calls being made. There are people being talked to,” he said.