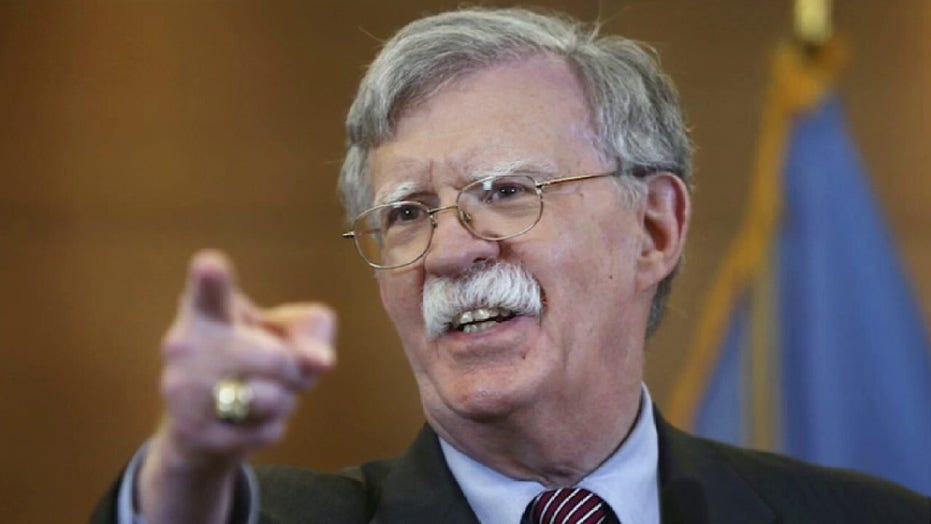 A lawyer for Ellen Knight, the former National Security Council official who conducted a pre-publication review of former national security adviser John Bolton’s book, "The Room Where It Happened," filed a letter with the court regarding the Justice Department’s litigation over whether Bolton broke the law by including classified information without approval.

Attorney Kenneth Wainstein described the months Knight spent on “the most intensive prepublication review process in recent memory at the NSC,” and how she had never seen such involvement from political appointees before.

"[A]s a career professional in the field of classified information management, Ms. Knight is very concerned about the politicization -- or even the perceived politicization -- of the prepublication review process," the letter said.

“This review entailed an unprecedented amount of interaction between the political appointees in the NSC Legal staff and the career prepublication review staff,” Wainstein wrote, adding that Knight was “often daily” in contact with the legal team.

Wainstein detailed how after Knight recommended the manuscript for clearance, the legal team delayed in taking action, telling her only that the process was slowed as they addressed issues related to the coronavirus pandemic.

Despite Knight telling Bolton that the process was still “ongoing,” he and his publisher were preparing for their intended June release, which led NSC officials to reveal to Knight that they believed there was still classified information in the manuscript based on a review conducted without Knight’s knowledge by NSC Senior Director for Intelligence Programs Michael Ellis. Wainstein claimed that Ellis did not even have the appropriate training for such a task at the time, and that Knight believes that Ellis’ conclusions were based on him performing the wrong kind of review.

The letter explains that Ellis conducted a “classification review” as if he was looking at a government record, instead of doing a “prepublication review” of a private citizen’s work, which is protected by the First Amendment. According to Knight, she spent time checking to see whether sensitive information had already been made public, which Ellis did not appear to have done.

Wainstein also states that Knight was “regularly instructed” to use the phone instead of email to communicate with NSC legal staff about her interactions with Bolton and Bolton’s attorney Charles Cooper. She was told that there was concern that others could read the manuscript through the internal records system and leak information.

Wainstein said he was compelled to file the letter to present Knight’s side of the story as the Justice Department claims in their current litigation that Bolton’s book was published despite government claims that it included classified information. Bolton asserted that he was told the book was good for release—Knight also challenged this claim, noting that she told him the process was not complete.

The letter goes on to say that in June, Knight was called in to meet with the deputy White House counsel, who challenged her decisions to clear various passages in the book. After she explained herself, she was asked if her conclusions and Ellis’s could have been the result of a difference of opinion, and she said no.

At that point, the letter says, Knight was asked to sign a declaration that said it was ultimately a matter of experts disagreeing, that her team’s work may have been inferior, and that the manuscript was unfit for publication. When attorneys would not tell her how the declaration would be used in their litigation, and would not let her see a declaration signed by Ellis, she refused to sign.

According to the letter, Knight asked the attorneys why political appointees were getting involved in the process and why they were taking the litigation route instead of just addressing concerns Knight’s team had with Bolton. According to Wainstein, the lawyers “had no answer for her challenges,” and that when Knight asked if it had to do with President Trump, some agreed.

“[W]hen Ms. Knight speculated that this litigation was happening ‘because the most powerful man in the world said that it needed to happen,’ several registered their agreement with that diagnosis of the situation,” Wainstein wrote.

The White House did not immediately respond to Fox News' requests for comment.

Bolton’s attorney Charles Cooper said Wainstein’s letter “came as a complete surprise” and that “we are still assessing its implications for the Justice Department’s lawsuit.”

Department of Justice spokesperson Kerri Kupec said in a statement that "Mr. Bolton chose to publish a manuscript that four senior National Security officials have stated, under penalty of perjury, contains classified information," and that a district court said there were "grave national security concerns" about Bolton's conduct.

"Ms. Knight’s letter confirms that Mr. Bolton did not receive the appropriate and required written, pre-publication approval, and it is undisputed that the process was not completed at the time Mr. Bolton’s book was released," Kupec said. "The publication of a memoir by a former National Security Adviser, right after his departure, is an unprecedented action, and it is not surprising that National Security Council staff would pay close attention to ensure that the book does not contain the release of classified information.”