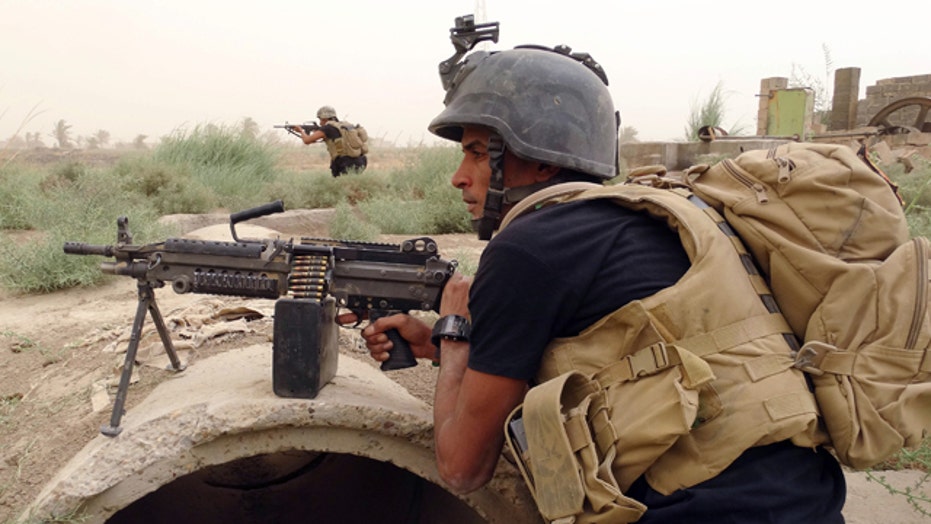 Dozens of intelligence analysts working at the U.S. military's Central Command (CENTCOM) have complained that their reports on ISIS and the Nusra Front in Syria were inappropriately altered by senior officials, according to a published report.

The Daily Beast reported late Wednesday that more than 50 analysts had supported a complaint to the Pentagon that the reports had been changed to make the terror groups seem weaker than the analysts believe they really are. Fox News confirmed last month that the Defense Department's inspector general was investigating the initial complaint, which the New York Times reported was made by a civilian employee of the Defense Intelligence Agency (DIA).

At a panel discussion Thursday moderated by Fox News' Catherine Herridge, DIA Director Lt. Gen. Vincent Stewart also confirmed the probe and said the DIA will let the investigation play out. He said the DIA "delivers the truth wherever the debate takes us."

The Pentagon acknowledged the IG investigation as well.

"I think ... the best thing for us to do is wait" for the IG investigation, spokesman Peter Cook said. He said Defense Secretary Ash Carter expects "candid assessments" from the intelligence teams.

"Unvarnished, transparent intelligence is what this secretary expects on a daily basis," he added.

The assessments in question are prepared for several U.S. policymakers, including President Obama.

The Daily Beast report, which cited 11 individuals, claimed that the complaint being investigated by the Defense Department was made in July. However, several analysts reportedly complained as early as this past October that their reports were being altered to suit a political narrative that ISIS was being weakened by U.S.-led airstrikes in Syria.

"The cancer was within the senior level of the intelligence command," the report quotes one defense official as saying.

According to the report, some analysts allege that reports deemed overly negative in their assessment of the Syria campaign were either blocked from reaching policymakers or sent back down the chain of command. Others claim that key elements of intelligence reports were removed, fundamentally altering their conclusions. Another claim is that senior leaders at CENTCOM created a work environment where giving a candid opinion on the progress of the anti-ISIS campaign was discouraged, with one analyst describing the tenor as "Stalinist."

The report alleges that when the analysts' complaints were initially aired, some of those who complained were urged to retire, and did so. Facing either resistance or indifference, other analysts self-censored their reports, the Daily Beast claims.

The defense official quoted by the Daily Beast said that some who spoke up did so out of guilt that they did not express doubts about former Iraqi dictator Saddam Hussein's alleged chemical weapons program in the run-up to the Iraq. War.

"They were frustrated because they didn’t do the right thing then," the official said.

The House and Senate Intelligence Committees have been advised of the complaint that prompted the inspector general's investigation, which is required if Pentagon officials find the claims credible.

Government rules state that intelligence assessments "must not be distorted" by agendas or policy views, but do allow for legitimate differences of opinion.

"While we cannot comment on ongoing investigations, we can speak to the process and about the valued contributions of the Intelligence Community (IC)," he said, adding that intelligence community members typically are able to comment on draft security assessments. "However," he said, "it is ultimately up to the primary agency or organization whether or not they incorporate any recommended changes or additions. Further, the multi-source nature of our assessment process purposely guards against any single report or opinion unduly influencing leaders and decision-makers."

Earlier this summer, on the eve of the anniversary of the launching of airstrikes against Iraq, the Associated Press reported that U.S intelligence had concluded that the airstrikes had helped stall ISIS after sweeping gains in the summer of 2014. However, the report also said the terror group remained a well-funded army that could easily replenish its numbers as quickly as fighters were eliminated.