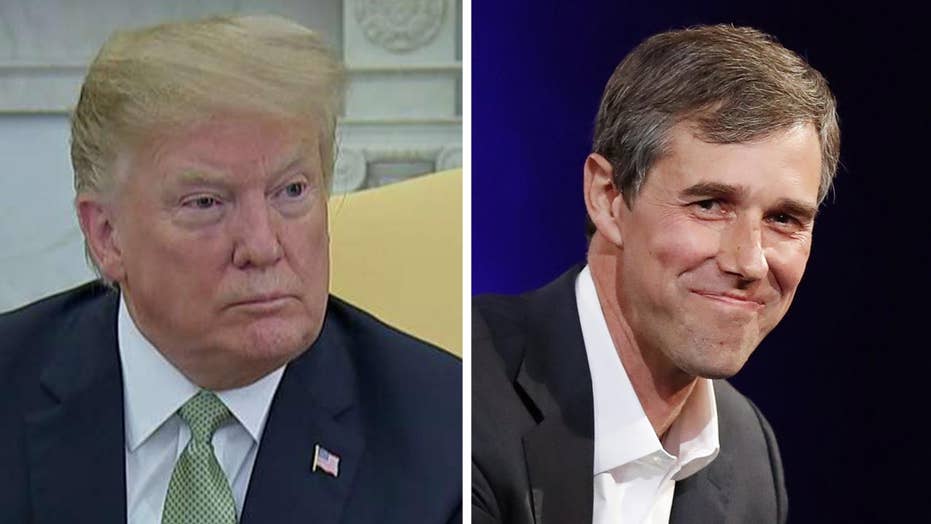 Trump: Is Beto O'Rourke crazy or is that just the way he acts?

He might not have a presidential nickname just yet, but Beto O’Rourke is on the president’s radar.

President Trump was asked what he thought of O’Rourke officially entering the 2020 presidential race while speaking to reporters in the Oval Office on Thursday morning.

“He has a lot of hand movement. Is he crazy or is that just the way he acts?” Trump said while taking questions from the press.

“I’ve never seen hand movement, I watched him a little while this morning, doing, I assume some kind of a news conference. I’ve actually never seen anything quite like it. Study it. I’m sure you’ll agree.”

Trump was speaking to the press after meeting with Irish Prime Minister Leo Varadkar.

O’Rourke, who rose to national prominence after challenging Republican Sen. Ted Cruz in the 2018 midterms, announced he is running for the Democratic nomination on Thursday morning.

In a video alongside his wife, Amy, the 46-year-old said: “Amy and I are happy to share with you that I’m running to serve you as the next president of the United States of America.

"This is a defining moment of truth for this country and for every single one of us. The challenges we face right now, the interconnected crises in our democracy and our climate, have never been greater.”

TRUMP'S NICKNAMES FOR RIVALS, FROM 'ROCKET MAN' TO 'CROOKED HILLARY'

Trump regularly creates nicknames to mock his political opponents, with everyone from Joe Biden to former O’Rourke foe Cruz getting a moniker.