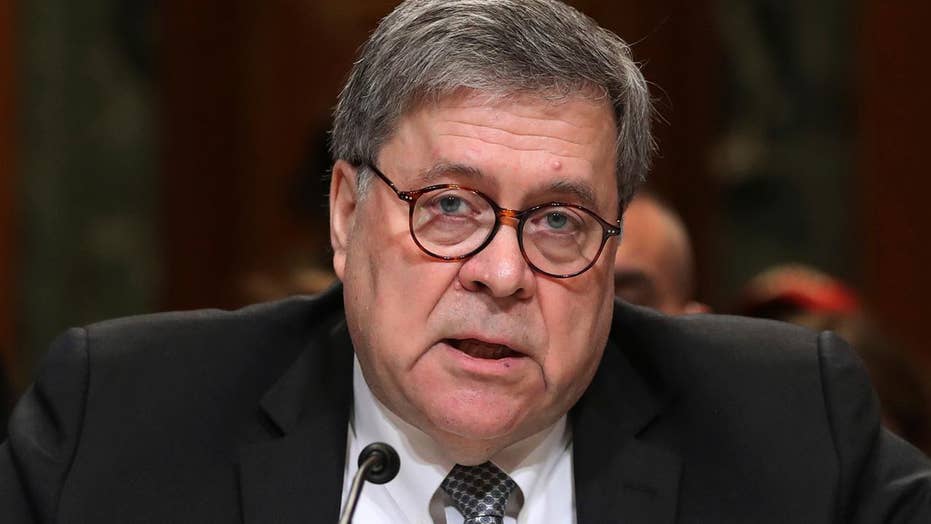 Attorney General Bill Barr tells Senate lawmakers that he believes spying did occur during the 2016 presidential campaign; Catherine Herridge reports on the exchange.

Prominent Democrats lined up to hammer Attorney General Bill Barr for testifying Wednesday that federal authorities had spied on the Trump campaign in 2016, with one top House Democrat charging that Barr is not acting "in the best interest of the DOJ or the country."

"I think spying did occur," Barr said during the explosive hearing before a Senate Appropriations subcommittee. "The question is whether it was adequately predicated. …Spying on a political campaign is a big deal."

Despite mounting evidence that the FBI pursued an array of efforts to gather intelligence from within the Trump campaign -- and the fact that the FBI successfully pursued warrants to surveil a former Trump aide in 2016 -- House Majority Leader Steny Hoyer, D-Md., told Fox News that Barr's loyalties were compromised.

"He is acting as an employee of the president," Hoyer said. "I believe the Attorney General believes he needs to protect the president of the United States."

House Intelligence Committee Chairman Adam Schiff, D-Calif., added in a statement that Barr "should not casually suggest that those under his purview engaged in ‘spying’ on a political campaign."

“This type of partisan talking point may please Donald Trump, who rails against a ‘deep state coup,'" Schiff said, "but it also strikes another destructive blow to our democratic institutions. The hardworking men and women at the DOJ and FBI deserve better.”

Barr's comments, and the ensuing semantic hullabaloo, followed a new report that the Justice Department’s internal watchdog is scrutinizing the role of an FBI informant who contacted members of the Trump campaign during the 2016 election, as part of a broader review of the early stages of the Russia investigation.

The New York Times reported that Justice Department Inspector General (IG) Michael Horowitz is looking into informant Stefan Halper’s work during the Russia probe, as well as his work with the FBI prior to the start of that probe.

Trump, for his part, has vowed to release surveillance warrant applications used to monitor his former aide, Carter Page, beginning in October 2016. The FBI's partisan sources in those applications have come under scrutiny, and FBI text messages obtained by Fox News show high-level concerns at the DOJ as to the credibility of sources presented to the Foreign Intelligence Surveillance Act (FISA) court.

Page was never charged with any wrongdoing.

A separate DOJ IG investigation into potential FISA abuses by the FBI, which is expected to look at whether the bureau improperly presented misleading sources or withheld exculpatory information in its presentations to the FISA court, is ongoing. Barr said that review is likely to be completed by May or June.

In particular, the FBI assured the FISA court on numerous occasions -- in the October 2016 warrant application and in subsequent renewals -- that other sources, including a Yahoo News article, independently corroborated Steele's claims, without evidence to back it up. It later emerged that Steele was also the source of the Yahoo News article, written by reporter Michael Isikoff.

The FBI also quoted directly from a disputed Washington Post opinion piece to argue that Trump's views on providing lethal arms to Ukraine, and working toward better relations with Russia, was a possible indicator that the campaign had been compromised.

Trump's policy on Ukraine weapons at the time mirrored then-President Obama's policy, and the FBI did not present an independent assessment of the accuracy of the Post piece in its warrant application.

Still, Schiff and Hoyer were joined by other Democrats who pushed back against Barr's comments.

He also characterized Barr's statements as an “effort to divert attention” from Special Counsel Robert Mueller's full report, which Barr said will be released within a week. Mueller's investigation ended last month without securing the indictment of a single American for collusion with Russia or obstruction of justice, "despite multiple offers from Russian-affiliated individuals to assist the Trump campaign."

In a tweet late Wednesday, Trump personal lawyer Rudy Giuliani condemned Nadler's "diarrhea of the mouth," and referenced a report last year that Nadler was overheard on a train discussing his plans to impeach the president.

"His lack of judiciousness was evident when he was overheard on Amtrak prematurely planning impeachment," Giuliani wrote.

Halper, an American professor who reportedly is deeply connected with British and American intelligence agencies, has been widely reported as a confidential source for the FBI during the bureau’s original investigation into Russian meddling in the 2016 election. That official counterintelligence operation was opened by then-senior agent Peter Strzok, who has since been fired from the bureau.

During the 2016 campaign, Halper contacted several members of the Trump campaign, including Page and former foreign policy adviser George Papadopoulos.

"It was an illegal investigation. ... Everything about it was crooked," Trump told reporters on Wednesday, describing it as an attempted "coup" and reiterating his interest in digging into the probe's origins. "There is a hunger for that to happen."

Also on Tuesday, Fox News reported that a source said Barr had assembled a “team” to investigate the origins of the bureau’s counterintelligence investigation into the Trump campaign.

On Wednesday, Barr testified that he hasn't technically "set up a team" but has colleagues helping him as he reviews the case.

"I think spying did occur."

"This is not launching an investigation of the FBI," he stressed. "Frankly, to the extent there were issues at the FBI, I do not view it as a problem of the FBI. I think it was probably a failure of the group of leaders—the upper echelons of the FBI. I think the FBI is an outstanding organization and I am very pleased Director Chris Wray is there."

He added, "If it becomes necessary to look over former officials, I expect to rely on Chris and work with him. I have an obligation to make sure government power is not abused and I think that’s one of the principal roles of the attorney general."

The FBI’s 2016 counterintelligence investigation, formally opened by Strzok, began with a “paucity” of evidence, according to former FBI counsel Lisa Page, with whom Strzok was romantically involved.

During a closed-door congressional interview, Page admitted that the FBI “knew so little” about whether allegations against the Trump campaign were “true or not true” at the time they opened the probe, adding that they had just “a paucity of evidence because we [were] just starting down the path” of vetting allegations.

Former FBI Director James Comey would testify later that when the agency initiated its counterintelligence probe into possible collusion between Trump campaign officials and the Russian government, investigators "didn't know whether we had anything" and that "in fact, when I was fired as director [in May 2017], I still didn't know whether there was anything to it."