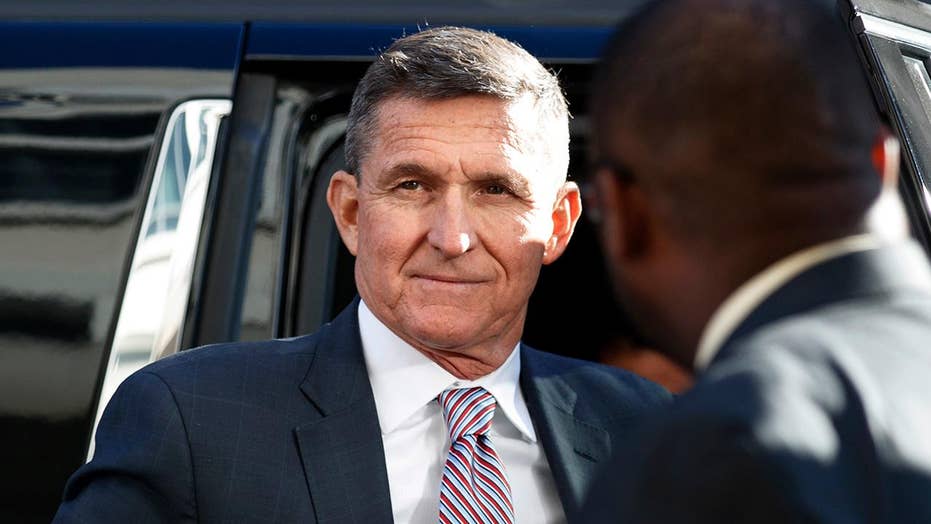 A Russian-born academic who was at the center of attention in 2017 for past contact with former National Security Adviser Michael Flynn told Fox News in an exclusive interview that she is not a spy for Moscow – and, to the contrary, believes she was “used” to smear Flynn.

"I think there's a high chance that it was coordinated, and I believe it needs to be properly investigated,” Svetlana Lokhova told Fox News.

Lokhova entered the political firestorm in early 2017, as Flynn was forced out of the Trump administration over lying about his contact with Ambassador Sergei Kislyak. At the time, Lokhova was contacted by three American media outlets over a four-day period – and was promptly hit with claims in the press and on social media that she was a Russian operative for Moscow.

The allegations involved her contact with Flynn three years prior at a 2014 dinner at the University of Cambridge, England, when Flynn was Defense Intelligence Agency director.

Michael Flynn is pictured at a 2014 dinner at the University of Cambridge. (Courtesy of Svetlana Lokhova)

"I'm not a Russian spy and I have never worked for the Russian government," the 38-year old historian and academic said, in an interview first broadcast on Fox News’ “Tucker Carlson Tonight.” "I believe that General Flynn was targeted and I was used to do it."

Lokhova said the U.K. academic group behind the dinner included American Stefan Halper. The professor, who did not return emails from Fox News seeking comment, is widely reported to be a confidential source in the FBI's original probe into Russian meddling in the 2016 election. During the 2016 presidential campaign, Halper also reached out to Trump campaign aides including Carter Page, George Papadopoulos and Sam Clovis

Halper is also at the center of a whistleblower complaint filed last summer that alleges government contractor abuses, as well as excessive payments with taxpayer dollars.

Lokhova said the 2014 Cambridge event was attended by about a dozen people. According to an event flyer, the Cambridge events were organized by Halper and others including Sir Richard Dearlove, former head of British intelligence service MI6.

When asked if she was ever alone with Flynn, Lokhova told Fox News, "I have never been alone with General Flynn, before, during or after the dinner."

Documents reviewed by Fox News appear to back up Lokhova’s timeline of events -- and raise questions about subsequent unsolicited outreach to Lokhova on Halper’s behalf.

In the months following the 2014 dinner, Lokhova said there was no sign of concern, providing Fox News with a May 2015 email indicating the U.S. government tried to set up a similar event with the Cambridge group, including Lokhova, to host a new senior intelligence agency head.

Then in December 2015, Flynn traveled to Moscow as a private citizen and was paid $45,000 to speak at a Russia Today event where he shared a table with President Vladimir Putin. Allegations later emerged that Lokhova -- who said she emailed with Flynn a few times after the Cambridge dinner -- discussed traveling to Moscow to act as a translator. She flatly denies the allegations, saying, "There was absolutely no discussion of going to Moscow with General Flynn."

Soon after, Halper re-entered the picture. In early 2016, as Flynn's role advising the Trump campaign became known, Lokhova said she received an invitation out of the blue to a private dinner party with Halper. Lokhova shared the email with Fox News.

“It was very, very unusual because Stefan Halper and I, despite being part of the same group, and meeting pretty much in a public forum, we've had no personal contact at all. [Halper] to me was an obnoxious academic who absolutely hated all Russians," she said.

Then in early 2017, as Flynn was fired, Lokhova said the allegations surfaced about suspicious contact with Flynn three years earlier. The former national security adviser has since pleaded guilty to making false statements to the FBI and is awaiting sentencing.

Lokhova, a 38-year-old mother and academic who specializes in Russian intelligence, said she has spent a lot of time over the last two years "connecting the dots" and is now speaking out for personal and professional reasons.

"I'm an academic and I'm an author and my very career depends on my reputation. On a personal level, I'm a mother of a young child and I don't want my child when she grows up to think her mom is a wh-re and a traitor."

Halper has said virtually nothing in public about his role. During a rare interview with BBC Radio 4 Today in May 2017, Halper was asked if the Trump FBI inquiry was of Watergate proportions.

Halper said it's "moving in that direction."