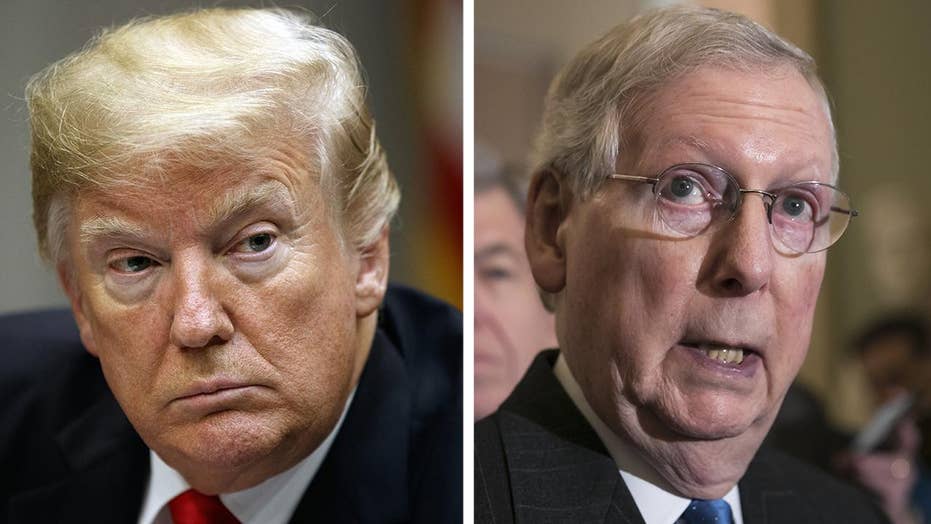 Just over a week after President Trump forcefully suggested he'd risk a government shutdown to secure border wall funding, the White House is now signaling a retreat -- and top conservative commentators and politicians are declaring that the president's "gutless" move has not only broken a campaign promise, but also undermined his credibility as a dealmaker.

"Trump will just have been a joke presidency who scammed the American people, amused the populists for a while, but he’ll have no legacy whatsoever" if he yields on the issue, columnist Ann Coulter told The Daily Caller in a podcast. (Within hours of those critical comments, Trump's official Twitter account stopped following Coulter's.)

When asked if the president should veto any stopgap funding bill that does not include money for the border wall, Meadows replied “yes.” He added that the "mistake" Republicans had made was that "we didn’t bring up the bill last week when we had the votes."

Conservatives' dire rhetoric comes as the White House makes an apparent about-face on the issue of border wall funding just hours before a Friday deadline to pass a spending bill that will keep the federal government operational.

"I am proud to shut down the government for border security ... because the people of this country don't want criminals and people that have lots of problems and drugs pouring into our country," Trump said in an explosive White House meeting with Senate Minority Leader Chuck Schumer, D-N.Y., and House Minority Leader Nancy Pelosi, D-Calif., on Dec. 11. "So, I will take the mantle. I will be the one to shut it down."

But in tweets on Wednesday, the president softened his rhetoric, saying the wall would get funded "one way or the other." And Senate Republicans introduced a stopgap funding measure without the $5 billion in border wall money Trump had previously requested, even as members of the conservative House Freedom Caucus said they were exploring options to include the funding.

The shift on the issue would not be the president's first this year. In March, Trump vowed after signing a $1.3 trillion spending bill with a warning: "I say to Congress: I will never sign another bill like this again." In September, Trump wrote on Twitter on the importance funding the wall, "REPUBLICANS MUST FINALLY GET TOUGH!"

"Well, I’m not going to sugarcoat it," conservative commentator Michelle Malkin told "Fox & Friends" on Wednesday. "I’m not going to spin it. I wish I could but I can’t. This is a cave. This was a blink."

Malkin slammed Senate Majority Leader Mitch McConnell, R-Ky., saying he "has been in office since 1984 and has never been able to get this deal done because he is afraid of a shutdown."

"Trump will just have been a joke presidency who scammed the American people."

She added: "But now look at what the White House is forced to do: scrounge around for $600 million in the defense budget in order to fund a puny 100 miles? As if border security is an afterthought?"

The Senate on Wednesday night passed a stopgap measure to continue funding the government and avert a shutdown later this week.

Speaking to Fox News' "Your World" on Wednesday, incoming House Majority Leader Steny Hoyer, D-Md., said McConnell would not have introduced the measure without the White House's blessing.

But Hoyer said the stopgap legislation was akin to "punting the ball down the road a bit" and merely delayed an eventual showdown on border wall funding.

Meadows, R-N.C., wrote on Twitter that the move was a "Christmas present" and a "Valentine's Day gift" to Democrats.

"Punting to Feb. 8 on a CR not only gives Democrats a Christmas present, it offers them a Valentine’s Day gift," Meadows wrote. "Democrats will win, the wall will not be built, and Congress will once again have punted when we should’ve been taking a stand. The time to fight is now. Zero excuse."

And Ohio Republican Rep. Jim Jordan suggested the delay would only hurt Republicans' chances of seeing the wall funded.

Kellyanne Conway, counselor to the president, insisted on “Fox & Friends” Wednesday morning that Trump isn’t “softening” his position on funding for the wall, though, and emphasized it’s up to Congress to present a deal to the president.

Without a resolution, more than 800,000 government workers could be furloughed or sent to work without pay, disrupting government operations.

For his part, Trump on Wednesday suggested he had kept his campaign promise for Mexico to pay for the wall, because the country's new trilateral trade pact with the U.S. and Canada would result in "far more money coming to the U.S."

But Coulter wasn't buying those explanations, telling The Daily Caller that if no border wall funding is secured, the broader consequences for conservatives will be devastating.

Coulter, one of the few commentators to correctly predict Trump's rise to the presidency early in the 2016 presidential primary season, suggested "no Republican will ever be elected president again" if Trump ultimately backs down.

"This marks a serious shift from the escalating tenor of President Trump’s statements on the issue," Shapiro wrote.

Democratic leaders have faced intra-party dissent over apparent border wall capitulations as well this year. In January, Schumer was slammed as a "coward" by fellow progressives after he forced a government shutdown by insisting that any temporary spending bill to keep the government fully operational include permanent protections for the so-called DREAMers -- immigrants brought illegally to the United States as children. Schumer backed off just days later in exchange for Republican promises to consider the matter in the future.

"It’s a pretty gutless move for the administration to back down from a fight over the wall after revving up Republicans for precisely that fight – especially since back in January, Senate Minority Leader Chuck Schumer was forced to back down from his own shutdown attempt while trying to push President Trump to grant amnesty to so-called DREAMers," Shapiro continued.

House Freedom Caucus spokesman Darin Miller told Fox News early Wednesday that the group of conservatives will try to amend any spending bill so it funds the border wall, saying they "see this as the last real chance" to try and keep their promise on the issue.