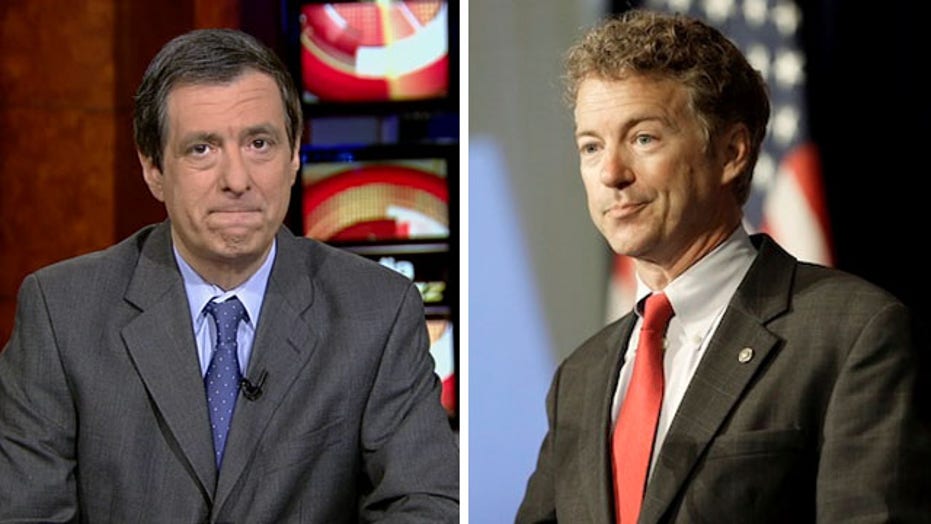 Ted Cruz wants to push the Republican brand to the right. Rand Paul wants to completely revamp the brand.

The contrast between these two freshmen senators, both of whom can envision themselves in the Oval Office, is a microcosm of a simmering debate within the GOP. And how it’s resolved will also affect the party’s strategy for the last two years of Barack Obama’s term.

Let’s start with Rand Paul. While other Republicans have been talking up the party's prospects on the eve of what look like a successful midterm election, the Kentucky senator has a very different message.

"Our brand is broken," he said on "Face the Nation." "I don’t think what we stand for is bad. We have a wall, or a barrier, between us and African-American voters."

A couple of days earlier, Paul referred to the GOP with a word you once couldn't use in polite company:

“Remember Domino’s Pizza? They admitted, ‘Hey, our pizza crust sucks.’ The Republican Party brand sucks and so people don’t want to be a Republican and for 80 years, African-Americans have had nothing to do with Republicans.

“Why? Because of a perception. The problem is the perception is that no one in the Republican Party cares.”

So Paul wants to throw out the pizza recipe and bake a new pie. That’s not what you expect someone’s party is poised to take over the Senate.

And he isn’t afraid to throw a few punches. In the CBS interview, Paul took a whack at potential rival Chris Christie for yelling at a heckler:

“This bully demeanor may go over well in certain places. But I grew up in the South. We’re yes ma’am and no sir, a little bit more polite."

Paul is clearly blazing a different path and trying to establish himself as a different kind of Republican. In the process, he is ticking off other Republicans, but no matter. That’s how he keeps landing on magazine covers like Time’s as “the most interesting man in politics.” The piece centers on Paul’s “radical ambition” and his mission as a “visionary” trying to “reinvent the conservative Republican story line.”

Ted Cruz comes from a different place, a hard-line and often uncompromising conservative. More than any other lawmaker, he is identified with the strategy that led to last year’s government shutdown. The Texas senator doesn’t want to change the party’s recipe so much as return the GOP to its conservative roots.

If the Republicans win the Senate, Cruz told the Washington Post, he wants a series of hearings on Obama “looking at the abuse of power, the executive abuse, the regulatory abuse, the lawlessness that sadly has pervaded this administration.” That will likely happen, although the House has held many such hearings.

Cruz says Republicans should also “pursue every means possible to repeal ObamaCare,” Cruz said, including parliamentary procedures to overcome a Democratic filibuster. Of course, the House has voted dozens of times to repeal ObamaCare, but this Cruz approach is about drawing the sharpest possible distinctions.

And Cruz would not pledge to back Mitch McConnell as majority leader, a clear sign that he’s not interested in being a team player unless it serves his interests. McConnell did not originally back Paul in Kentucky, but they have forged a working relationship.

BuzzFeed, by the way, calls Cruz “the clear frontrunner for the Republican nomination.This is not trolling. This is serious. Conservatives vote in Republican primaries. And Cruz is really good at talking to conservatives.”

Despite their stylistic differences, Cruz and Paul have something in common: They both care less about party unity than blazing a new trail. Which is why two men who were unknown to the country four years ago are now serious contenders for the presidency.

Paul has not only wants to make inroads in the black community—he even visited Ferguson--he has used his libertarian cred to try to court younger voters. He’s done this by emphasizing privacy questions, for instance, when it comes to NSA surveillance. Rand has a familiar last name, thanks to his dad, the perennial presidential candidate, but still has to square his non-interventionist foreign policy in an ISIS-challenged world, an especially tough sell in the GOP.

The surgeon believes that much of the press operates on him in an unfair way. But he gives lots of interviews anyway, intuitively understanding that it’s better to try to exploit the media than to have a hostile relationship.

Paul and Cruz are essentially competing in the conservative wing of the conservative party. The establishment candidate would be Christie (if he stops yelling at hecklers) or Jeb Bush (whose sons say he’s likely to run)—or else Mitt Romney (who again told Chris Wallace he’s not running, though not with the “done done done” language of his wife Ann.

Cruz told the Post he likes and respects Bush, “but I think we have seen election after election that when Republicans fail to draw a clear distinction with the Democrats, when we run to the mushy middle, we lose.”

“At some point, after Gerald Ford and Bob Dole and John McCain and Mitt Romney . . . we shouldn’t keep making the same mistakes over and over again.”

One man wants to free his party from the moderate establishment, the other talks about how his party sucks as badly as the old Domino’s pizza. Whether Rand Paul or Ted Cruz has that special sauce is something we may find out in 2015.