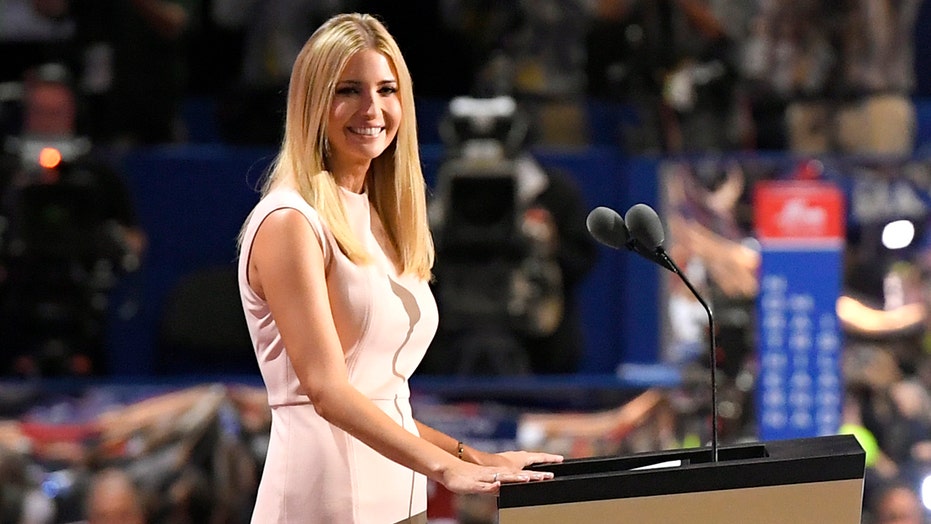 Ivanka Trump has shown her strength as a surrogate for her father in the boardroom and on the campaign trail. But as Election Day draws closer, the Donald Trump team faces a decision on how to balance the 34-year-old’s weighty responsibilities – as executive vice president of The Trump Organization, and top campaign adviser and advocate.

If the response to her recent convention address is any gauge of her impact, pollsters suggest the Trump campaign may want to do whatever it can to get Ivanka on the trail.

“She [was] off the charts,” Lee Carter, a pollster with Maslansky + Partners, told Fox News in reviewing the focus-group reaction to Ivanka right after her speech. “The bottom line is she is an amazing spokeswoman for him.”

Ivanka is seen as someone who could make a powerful case for her dad, potentially softening his image among female voters and others with whom the Republican’s numbers have lagged.

Asked for comment on what's next for the influential Trump daughter – and mother of three – the campaign did not elaborate but suggested she'll play an important role.

“She will be an incredible asset to the campaign and we are grateful for her support,” Trump spokeswoman Hope Hicks told FoxNews.com.

The Trump Organization did not respond to requests for comment.

Ivanka Trump's convention address in Cleveland was a clear message to independents and especially female voters as she touted her father’s record on hiring women, favoring quality over quotas and embracing talent.

“My father values talent. He recognizes real knowledge and skill when he finds it. He is color blind and gender neutral. He hires the best person for the job, period,” she told the audience at Quicken Loans Arena.

For many voters, it was their first chance to really hear from Ivanka.

But she's been an integral part of her father's business empire for years, and now the inner political circle – dual roles that could complicate efforts to deploy her on the trail.

Inside the Trump Organization, Ivanka primarily manages the real-estate components and is seen by many as the emerging face of the Trump brand. She is considered one of the few individuals Trump trusts to make deals on his behalf.

Ivanka has publicly defended her father from claims of sexism and racism, while privately her influence over major campaign decisions is virtually unrivaled, a source with intimate knowledge of campaign operations told FoxNews.com. The source confirmed she played an influential role in the dismissal of former campaign manager Corey Lewandowski.

“She is less concerned about the politics of the campaign and more focused on protecting the Trump brand,” the source said.

Ivanka and her husband Jared Kushner also played a critical role in his selection of Indiana Gov. Mike Pence as Trump’s running mate, according to Time magazine.

Sarah Lenti, a Denver-based Republican consultant, suggested the Trump daughter proved an asset in Cleveland and should be deployed to whatever extent possible.

“I think [Trump] needs to play the woman’s card as much as possible. She was highly relatable and is extremely well-liked among working- and middle-class women,” Lenti said.

During a recent focus group of women, Lenti found a majority of them disliked both Hillary Clinton and Donald Trump -- but related to Ivanka.

“They wanted to hear more from her on the issues. They were really impressed with her grace and what she has accomplished in life,” Lenti told FoxNews.com. “Older and middle-aged women don’t want to hear about abortion. They want to hear about how to balance work and life. [Ivanka] is a mom of three, she works a full-time job and she has her own business. She gets it.”

A clearer picture will emerge in coming weeks, but a CNN/ORC post-convention poll found Donald Trump made gains both in terms of his personal image and his ability to manage foreign policy.

He still has ground to make up with women. A post-convention CBS News poll showed Clinton expanding her lead among women (though trailing among men).

The Trumps may have a chance, however, to shift those numbers. A pre-convention, six-week Morning Consult poll found while Clinton led Trump 44-36 percent among women, as many as 21 percent were undecided.

Ivanka Trump's presence on the campaign trail inevitably creates a rivalry of sorts with the famous daughter on the other side of the aisle, Chelsea Clinton, who introduced her mother for the Democrats' closing convention night in Philadelphia last Thursday.

Two days earlier, Chelsea Clinton was asked during a Facebook Live event what she would like to ask Ivanka. Clinton said it would be how her father would pay for his proposals.

“How would your father do that given it’s not something he’s spoken about. There are no policies on any of those fronts on his website. Not last week. Not this week. The how question is super important,” she said.

“When you look at those issues that certainly affect our generation so strongly, I think my mom has stronger plans and a stronger record for actually delivering for women and families,” Clinton added.

In a recent interview with Politico, Ivanka acknowledged voters may view her as a product of heritage, not hard work:

“I don’t have a problem if somebody who has never met me wants to say that I wouldn’t be where I was today without my family because you know what? They may be right. They probably are right. Who the hell knows? It’s an impossible argument.”