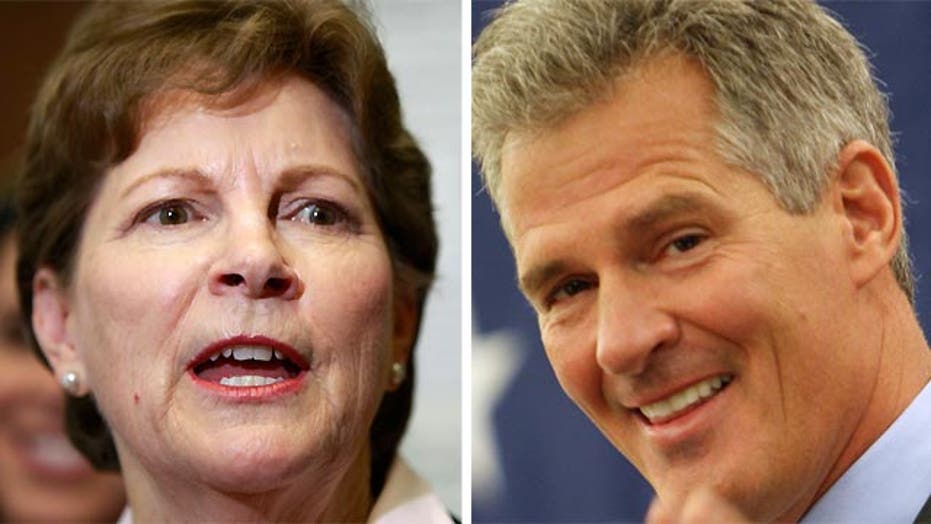 Brown, the former Massachusetts senator, picked up roughly half the vote with most precincts reporting.

The November matchup has emerged as one of the hottest in the midterm cycle, with one poll showing Brown shrinking Shaheen’s early 12-point lead to single digits in the closing weeks -- presenting the GOP with an unexpected bonus opportunity to win a net total of six seats to take control of the Senate.

"After six years of missed opportunities at home and growing dangers around the world, we need change," Brown said in his victory speech. "And the problem is a vote for my opponent will change exactly nothing."

This is Brown's third U.S. Senate campaign in five years. One of the original tea party favorites, he shocked the nation by winning a 2010 special election to replace the late Massachusetts Sen. Edward Kennedy, a Democrat. That win in a Democratic stronghold going back decades vaulted Brown to the top of the GOP's list of rising stars, but he was soundly defeated by Democrat Elizabeth Warren in 2012. Last year, he moved to New Hampshire, where he had a vacation home and had lived as a toddler, seeking an alternate route to Washington.

If he's successful, Brown would become only the third U.S. senator to serve multiple states. Waitman Willey served Virginia and then West Virginia when it became a state during the Civil War, and James Shields represented Illinois and Minnesota before being elected from Missouri in 1879.

Brown told a victory rally Tuesday night, “no one is more invested in failed policy than Shaheen” and stressed her close connection to Obama, saying they campaigned together and she voted with him “99 percent of the time.”

Shaheen wasted no time contrasting Brown's recent arrival in the state to her decades of public service as a state senator, the first woman elected governor of New Hampshire and the state's first female U.S. senator.

"I didn't just move here. I've been here, working to make a difference for New Hampshire," she planned to tell supporters Tuesday night. "No matter where Scott Brown lives, he's going to put Scott Brown first. Not you. Not your family. Not New Hampshire."