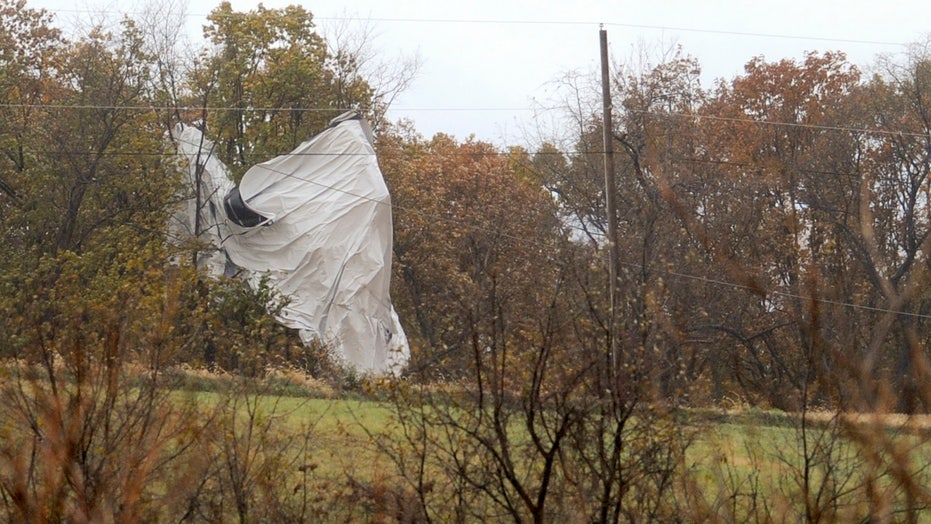 Military blimp breaks off of moorings at Maryland military base

A multi-billion dollar military trial balloon came down with a thud, literally, this week, leaving behind a path of wreckage and, perhaps, any hope of getting the 17-year-old air surveillance program off the ground.

On Wednesday, a 243-foot military aerostat commonly referred to as a “blimp” crash-landed in a wooded area of central Pennsylvania after becoming unmoored from its tether and drifting all the way from its home over Aberdeen, Md., not far from the nation's capital.

The airship was one of two flown by the $2.7 billion JLENS (Joint Land Attack Cruise Missile Defense Elevated Netted Sensor) program, which has had a troubled budget and performance history spanning close to two decades, according to critics. Now, members of Congress want to know whether U.S. taxpayers are funding a program that is more trouble than it’s worth.

“This event raises questions about the value and reliability of JLENS,” wrote Reps. Jason Chaffetz, R-Utah, and Elijah Cummings, D-Md., chairman and ranking member of the House oversight committee, respectively, in joint letters to Defense Secretary Ashton Carter and Transportation Secretary Anthony Foxx on Thursday. They asked for all DOD and DOT contracts and documents relating to JLENS no later than Nov. 12, to help them “understand whether JLENS is a worthwhile investment of taxpayer dollars.”

The two blimps had been in testing mode, hovering some 10,000 feet over the national capital area and carrying sophisticated radar designed to detect and track airborne threats including cruise missiles. Operated by NORAD (North American Aerospace Defense Command), the blimps are supposed have 360-degree situational awareness and be able to stay aloft for 30 days at a time.

"We are in the NCR, the National Capital Region, it is our geopolitical center of power in the United States. We have to protect it," Col. Frank Rice told CBS in February in a story about the blimps.

But on April 15, an activist was able to fly a gyrocopter through protected airspace onto the West Lawn of the U.S. Capitol without being detected. When members of Congress demanded to know how that could’ve happened, they were told that JLENS was inoperable that day.

“You can’t make this stuff up,” said retired U.S. Marine Corps Capt. Dan Grazier, who now works as a national security analyst for the Project on Government Oversight. He told FoxNews.com that the optics of a runaway blimp on Wednesday, trailed by two F-16 fighter jets and dragging a 6,000-foot tether behind, did not bode well for the military, or for the builder of the JLENS blimps, Raytheon Co., which had hoped to sell the machines on the international market.

“It’s certainly a laughing stock now,” Grazier said to FoxNews.com. “I don’t think this is a very good way to publicize a program.”

JLENS has endured bad publicity from the start. In 2010, the prototype airship costing the Pentagon about $182 million was destroyed when a civilian blimp unmoored in a storm and crashed into it at a manufacturing facility in North Carolina. Then, after a series of problems with cost and performance, the Pentagon was forced to scale back the project in 2012, effectively quashing production of any new machines beyond the two already produced.

In the meantime, the reviews have been lackluster at best -- in 2012 and 2013, the Pentagon’s Operational Test and Evaluation Office said the blimps were not meeting operational goals, in one case charging that JLENS “did not demonstrate the ability to survive in its intended operational environment.” The evaluation also found flaws in the airships’ software and communications programs.

But with consistent lobbying by Raytheon, the program has lived on like a “zombie,” racking up $2.7 billion in costs by 2014, The Los Angeles Times said in an investigation in September.

The two remaining blimps were supposed stay in their place in the latest three-year test, some 10,000 feet over the Aberdeen Proving Ground. Raytheon insisted in promotional materials that the tether, which “carries power up to the JLENS radar,” is made of Vectran and “has withstood storms in the excess of 100 knots.”

However, in the “unlikely event” a ship becomes unmoored, according to Raytheon, “there are a number of procedures and systems in place which are designed to bring the aerostat down in a safe manner.”

While no one was injured in this week’s accident, some 30,000 homes in the path of the dragging tether lost power, according to reports. Rep. Lou Barletta, R-Pa., told the press Wednesday during the incident that “the blimp left quite a bit of damage at ground level in its path, including disrupting power to thousands of my constituents.”

Calls to the Defense Department for comment were not returned Friday. Recovery teams were on the ground collecting equipment and an Army investigation is underway to find out exactly what happened to cause the ship to break free.

Grazier said it is time to rethink the future of the program.

“I can tell you from personal experience that this is not the first time one of these things has broken from its mooring,” he said, recalling while serving in the war, a surveillance blimp operated by the U.S. in Afghanistan drifted off with “classified equipment” and had to be shot down before it sailed into Pakistan.

“This is not exactly the Civil War anymore. I think we can come up with solutions other than a helium balloon flying 10,000 feet over the United States.”