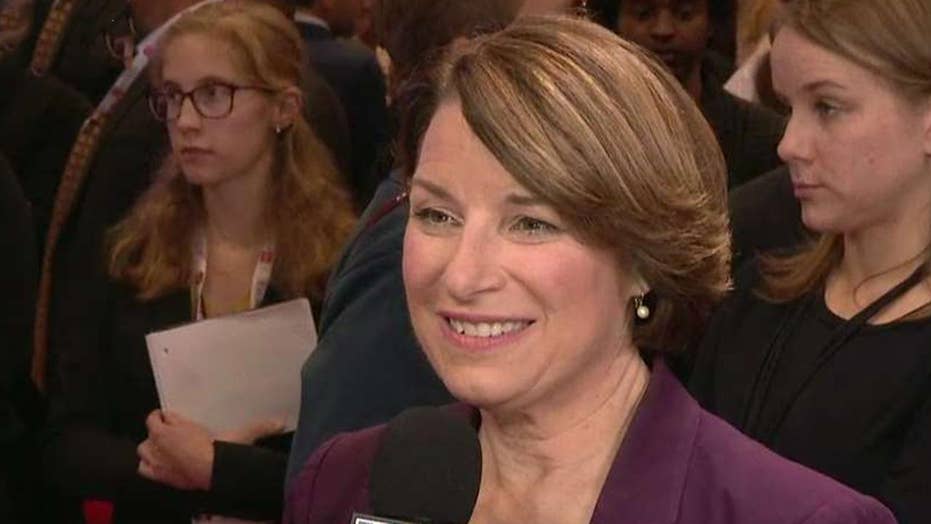 Sen. Amy Klobuchar on pushing back against Elizabeth Warren on debate stage

CONCORD, N.H. – Sen. Amy Klobuchar – giddy after a lack of sleep and rave reviews for her debate performance – touted to the jam-packed crowd inside a café in New Hampshire’s capital city that she raised $1.1 million in the 24 hours after Tuesday’s Democratic presidential nomination showdown.

The haul was nearly a quarter of what she brought in during the entire July-September third quarter of fundraising.

BUTTIGIEG, KLOUCHAR SLAM WARREN FOR NOT SAYING HOW SHE'LL PAY FOR MEDICARE-FOR-ALL

Highlighting that most of the money was from small-dollar contributions, the Minnesota Democrat told reporters “that shows something happened, that people were watching and they responded. And that is a very big deal for us.”

As Klobuchar spotlighted her post-debate haul, South Bend, Indiana Mayor Pete Buttigieg, who also excelled during the showdown, reported bringing in $1.1 million in the same 24-hours following the debate.

His campaign touted that Wednesday was “one of our biggest fundraising days yet.” And Buttigieg communications director Lis Smith showcased that the campaign “saw more traffic to their website in the past 24 hours than any other day.”

At the debate, both Buttigieg and Klobuchar took aim at co-front runner Sen. Elizabeth Warren of Massachusetts over how she’d pay for her proposed government-run Medicare-for-all plan.

The aggressive moves throughout the debate by both Buttigieg and Klobuchar literally paid off. And the potential surge for the two candidates trying to appeal to more centrist voters in the party could spell trouble for another more establishment contender: former Vice President Joe Biden.

Biden was the unrivaled front-runner in the race from even before he declared his candidacy in late April. But Warren caught up with him this autumn in many of the most recent national and early voting state polls. And Biden’s been eclipsed by Warren, Sen. Bernie Sanders of Vermont, and Buttigieg when it comes to the crucial fundraising race.

According to his Federal Election Commission filing, Biden had just under $9 million in his campaign coffers after spending more money than he raised the past three months. That’s far less than Sanders, Warren, and even Buttigieg.

“This week's debate was the best yet for Mayor Pete and Sen. Klobuchar and came at a moment of prime opportunity for them,” noted Ben LaBolt, a Democratic strategist who served as a spokesman on Barack Obama’s 2008 campaign and national press secretary on the president’s 2012 re-election campaign.

LaBolt spotlighted that “Biden's vote share is more gettable for pragmatic candidates like Buttigieg and Klobuchar than it is for Warren. The challenge now is to present a vision that shows what they could achieve in office versus a more systemically disruptive vision from Sen. Warren. The clock is ticking in Iowa and New Hampshire for that message to reach the remaining persuadable voters.”

Klobuchar, on frenetic post-debate swing through all 10 counties in the first-in-the-nation presidential primary state, appears to get it.

She called her performance in this week’s debate “critical.” And with just three and a half months to go until the primaries and caucuses kick off, she emphasized “this is when the campaign season begins.”