President Biden on Monday released his $5.8 trillion budget proposal for 2023, which he said calls for "one of the largest investments in our national security in history," including funding to ensure the U.S. military "remains the best-prepared, best-trained, best-equipped military in the world," amid Russia’s multi-front war on Ukraine.

The White House released the president’s FY 2023 budget Monday morning, which "sends a clear message that we value fiscal responsibility, safety and security at home and around the world," the president said.

"I’m calling for one of the largest investments in our national security in history, with the funds needed to ensure that our military remains the best-prepared, best-trained, best-equipped military in the world," the president said.

Biden said he is also calling for "continued investment to forcefully respond" to Russian President Vladimir Putin’s "aggression against Ukraine, with U.S. support for Ukraine’s economic, humanitarian and security needs."

The president’s budget proposal includes $6.9 billion for the European Deterrence Initiative, NATO, and countering Russian aggression to support Ukraine and other partnerships with NATO allies.

The budget would help to "enhance the capabilities and readiness of U.S. forces, NATO allies, and regional partners" amid Russia’s now two-month-long war on Ukraine.

The budget also includes $1.8 billion for the State Department and USAID, and $400 million for the "Countering the People’s Republic of China Malign Influence Fund."

The budget offers $1 billion in assistance to Ukraine for the State Department, USAID and the Department of Defense to counter "Russian malign influence" and to meet emerging needs related to "security, energy, cyber security issues, disinformation, macroeconomic stabilization and civil society resilience."

The Biden administration, this month, has sent nearly $1 billion in military and humanitarian aid to Ukraine amid Russia’s war on the country.

The budget also proposes $773 billion for the Department of Defense.

Biden’s budget "prioritizes China as the Department’s pacing challenge," and is expected to use the proposed funds to strengthen deterrence in the Indo-Pacific region.

"DOD is building the concepts, capabilities and posture necessary to meet these challenges, working in concert with the interagency and our allies and partners to ensure our deterrence is integrated across domains, theaters and the spectrum of conflict," the White House said. 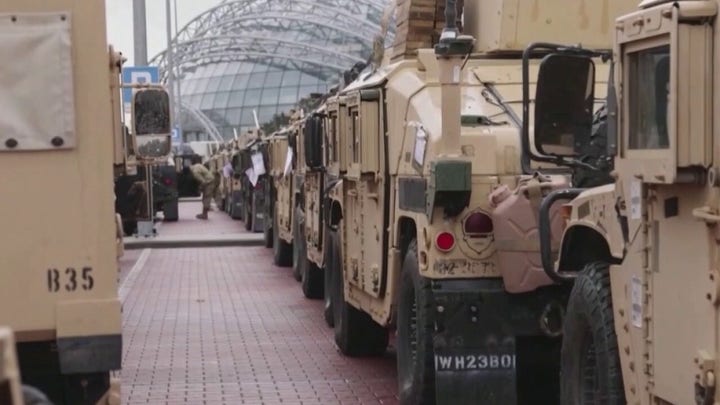 The president, earlier this month, warned China of "consequences" should Beijing respond and agree to Russia’s requests for military and economic aid amid its more than two-month-long war on Ukraine. The White House has said officials remain "deeply concerned" about China and Russia’s "alignment."

Meanwhile, Biden said budgets are "statements of values," and his "sends a clear message that we value fiscal responsibility, safety and security at home and around the world, and the investments needed to continue our equitable growth and build a better America."

Biden said his administration is "on track to reduce the federal deficit by more than $1.3 trillion this year, cutting in half the deficit from the last year of the previous administration and delivering the largest one-year reduction in the deficit in U.S. history."

The White House said the FY 2023 budget ensures that "corporations and the wealthiest Americans pay their fair share," while maintaining the president’s "promise" that no individual earning less than $400,000 will pay "an additional penny in new taxes."

SULLIVAN CLARIFIES BIDEN 'IN KIND' COMMENT, SAYS US HAS 'NO INTENTION' OF USING CHEMICAL WEAPONS

The budget, which the White House said would help to reduce the deficit by more than $1 trillion over the next 10 years, also delivers on Biden’s agenda.

The president, in the budget, proposed a new minimum tax on millionaires and billionaires "who so often pay indefensibly low tax rates."

The tax would ensure that those individuals pay "at least 20% of their total income in federal income taxes."

"The minimum tax would apply only to the wealthiest 0.01% of households – those with more than $100 million – and over half the revenue would come from billionaires alone," the White House said.

Shifting to law enforcement, Biden said his budget helps to "secure our communities by putting more police on the street to engage in accountable community policing, hiring the agents needed to help fight gun crime, and investing in crime prevention and community violence intervention." 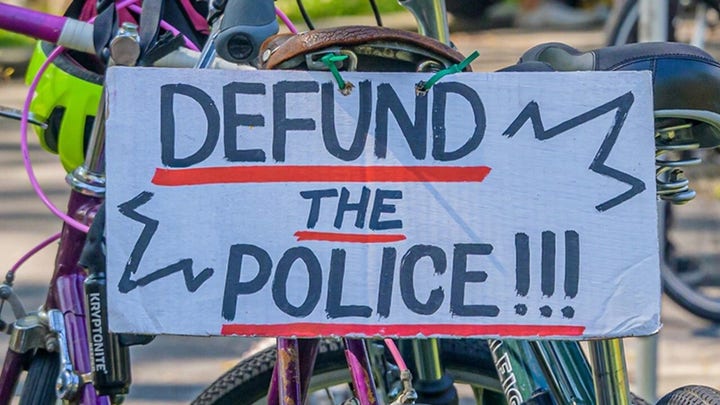 The budget includes $3.2 billion in "discretionary resources" for state and local grants, and $30 billion in "mandatory resources to support local law enforcement, crime prevention, and community violence intervention, including putting more officers for community policing on the beat across the nation."

The budget also includes $1.7 billion for the Bureau of Alcohol, Tobacco, Firearms and Explosives (ATF) to expand on multi jurisdictional gun trafficking strike forces by adding personnel and increasing regulation on the firearms industry.

"Under the president’s budget, key federal law enforcement agencies like the FBI and U.S. Marshals Service will have the resources they need to fight violent crime, including through fugitive apprehension and enforcement operations," the White House said. "The budget also ensures U.S. attorneys have the necessary support to prosecute violent criminals." 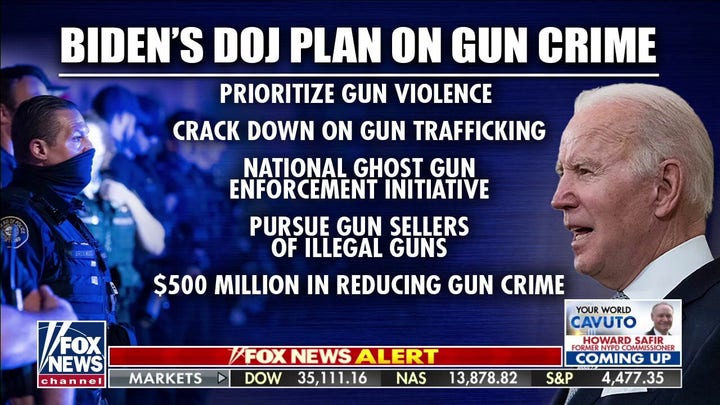 The budget invests $367 million – an increase of $101 million over the 2021 level – at the Justice Department to "support police reform, the prosecution of hate crimes, enforcement of voting rights, and efforts to provide equitable access to justice."

It also includes $100 million for a "historic multi-agency collaboration to provide comprehensive workforce development services" to people in the federal prison system, and $106 million to support the deployment of body-worn cameras to DOJ’s law enforcement officers.

As for jobs and the reduction of cost pressures for Americans, the White House said the president’s budget includes an increase in the supply of affordable housing.

STATE OF THE UNION: BIDEN TO SPEAK AGAINST DEFUNDING POLICE AMID VIOLENT CRIME SURGE

"To address the critical shortage of affordable housing in communities throughout the nation, the budget proposes $50 billions for housing construction and supply –addressing existing market gaps and helping to stabilize housing prices over the long-term," the White House said.

That budget would also include grants to "advance and reward" state and local jurisdictions’ efforts to "remove barriers to affordable housing development."

As for the supply chain, the budget includes $230 million for the Port Infrastructure Development Program to "strengthen maritime freight capacity," and $1.7 billion in spending for the Harbor Maintenance Trust Fund to facilitate "safe, reliable and environmentally sustainable navigation at coastal ports."

The budget also provides $372 million – an increase of $206 million from 2021 – for the National Institute of Standards and Technology’s manufacturing programs to "strengthen domestic supply chains." 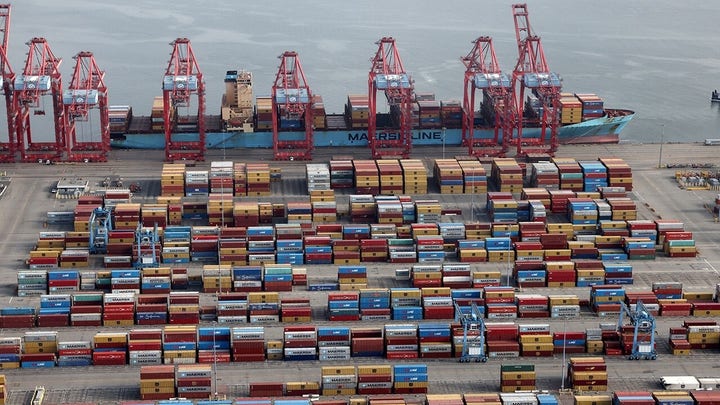 It also includes $125 million to help make America’s "small and medium manufacturers more competitive," and $200 million for a new solar manufacturing to build "domestic capacity in solar energy supply chains while moving away from imported products."

It also proposes $100 million to help community colleges work with the public workforce development system, and $100 million for new career training for an occupational readiness program that can support training for growing industries.

"All told, it is a budget that includes historic deficit reduction, historic investments in our security at home and abroad, and an unprecedented commitment to building an economy where everyone has a chance to succeed," Biden said Monday.

As for social issues, the budget provides $2.6 billion to "advance gender equity and equality across a broad range of sectors," which includes $200 million for the Gender Equity and Equality Action Fund to "advance the economic security of women and girls."

"This total also includes $1 billion to prevent, prepare for, and respond to future infectious disease outbreaks," the White House said, adding it would help for future "pandemic preparedness."

As for COVID-19, the budget also includes $9.9 billion to "build capacity at CDC and state and local levels to improve the core immunization program," and increase capacity for "forecasting and analyzing future outbreaks."

Meanwhile, the budget also includes $470 million to reduce maternal mortality and morbidity rates in the U.S. 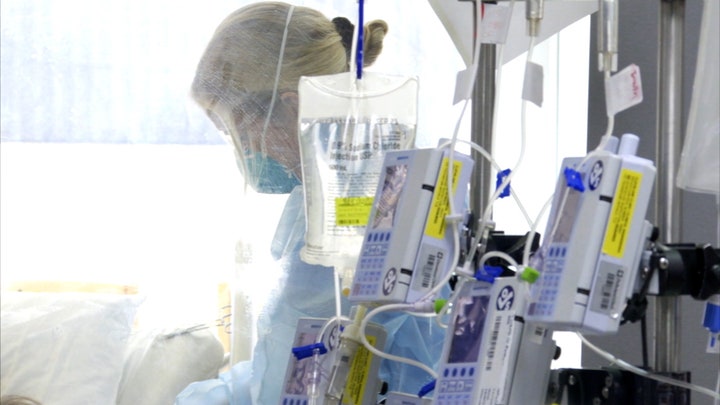 Shifting to climate, the budget proposes $3.3 billion to support "clean energy." The investments include $502 million to "weatherize and retrofit low-income homes," $260 million to support "energy efficiency improvements," $150 million to "electrify Tribal homes," and $80 million for a new "Grid Deployment Office" to "build the grid of the future."

The budget also proposes $18 billion for "climate resilience and adaptation programs across the federal government."

It includes more than $11 billion in international climate finance, which the White House says will "accelerate the global energy transition to net zero emissions by 2050."

The budget also includes $1.8 billion in the Forest Service and Department of Interior to strengthen the federal firefighting workforce and improve firefighter compensation.

As for education, the budget provides funding for K-12 schools, as well as $1 billion to help schools increase the number of school counselors, psychologists, social workers and other health professionals.

As for elections, the budget proposes $10 billion in elections assistance funding to be allocated over 10 years. The budget also proposes to fund an "expansion of U.S. Postal Service delivery capacity in underserved areas and support for vote-by-mail, including making ballots postage-free and reducing the cost of other election-related mail for jurisdictions and voters."