'Fox & Friends' enterprise reporter Lawrence Jones gets an inside look at the bunkers as Putin's assault on Ukraine rages on.

Diplomatic talks between Ukraine and Russia are set to resume this week, even after a series of gaffes by President Biden raised concerns about potential escalation in Ukraine and decay in U.S.-Russia relations.

Ukrainian negotiator David Arakhamia said Sunday that Russia and Ukraine agreed on a video call to hold in-person negotiations this week in Turkey, starting either Monday or Tuesday. Russia said the talks are most likely to begin Tuesday, according to Reuters, with Monday most likely serving just as a travel day.

This is not the first time Russia and Ukraine met for potential cease-fire negotiations during the war – which has now dragged on for more than a month. But it's notable after the White House was forced to walk back three comments from Biden – on three consecutive days – that many feared had the potential to inflame international relations in the region.

On Thursday, Biden was asked if the U.S. would respond if Russia were to use chemical weapons as part of its invasion of Ukraine. Biden said such a move by the Russians would "trigger a response in kind."

After that remark, it was up to national security adviser Jake Sullivan to clarify that Biden meant "we’ll respond accordingly" and that Russia would pay a "severe price." Sullivan added that "the United States has no intention of using chemical weapons, period, under any circumstances."

On Friday, Biden was speaking to U.S. troops in Poland, and he said the Ukrainian people "have a lot of backbone" before appearing to suggest that the troops would soon be in Ukraine itself – something U.S. officials have repeatedly ruled out.

A White House spokesperson later clarified: "The president has been clear we are not sending U.S. troops to Ukraine and there is no change in that position." 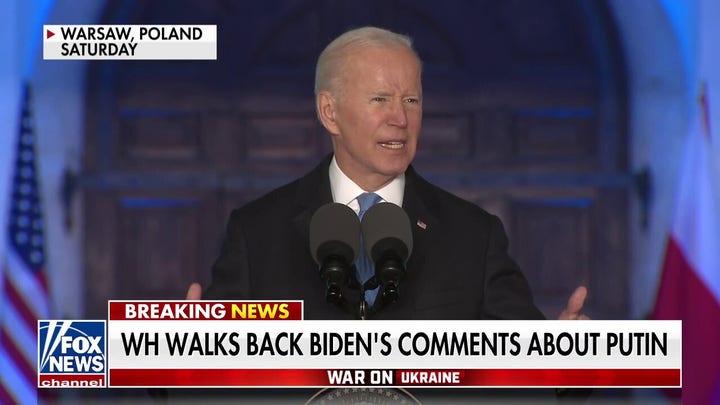 And Saturday, Biden appeared to call for regime change in Russia, declaring, "For God’s sake, this man cannot remain in power," in reference to Russian President Vladimir Putin.

"The president’s point was that Putin cannot be allowed to exercise power over his neighbors or the region. He was not discussing Putin’s power in Russia, or regime change," a White House official told Fox News Digital shortly after the speech concluded.

"It happened again. We all remember the ‘minor incursion’ greenlighting that the White House had to immediately try to clean up before Putin decided to invade Ukraine in the first place," he said on "Fox Report." "We've seen it with Vice President Harris during her travels. Words matter. When you're the president of the United States, the commander in chief, the vice president of the United States, you can't be saying this stuff off the cuff. Your job is to deescalate and not escalate." 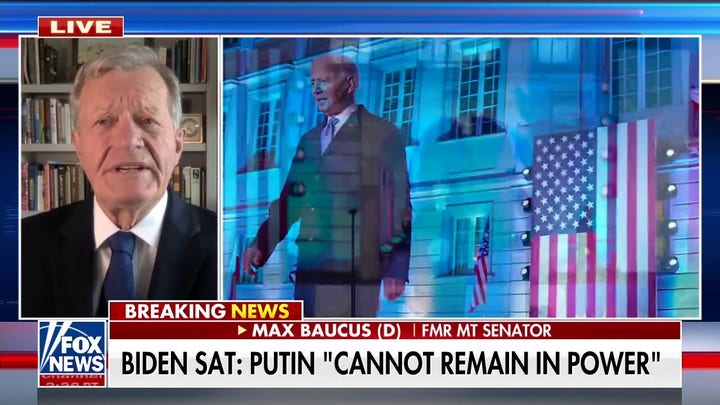 Former U.S. Ambassador to China Max Baucus, also on "Fox Report," said he was concerned Biden's comments could make things harder for Ukrainians to negotiate any kind of cease-fire.

"By saying it publicly he pretty much confirmed what President Putin already suspects," Baucus continued. "The more the United States says things like that publicly the more it closes our potential negotiations between all the parties who are involved here, the more it corners Putin, the more Putin might get more dangerous."

Ukrainian President Volodymyr Zelenskyy speaks via video call to the Doha Forum in Doha, Qatar, Saturday, March 26, 2022, calling on the energy-rich nation and others to boost their production to counteract the loss of Russian energy supplies. (AP Photo/Lujain Jo)

But nevertheless, Russia-Ukraine talks will resume this week. And Ukrainian President Volodymyr Zelenskyy told Russian journalists over the weekend his country is "ready to go for" a deal that could include some form of security guarantees in exchange for potential "neutrality" between Russia and NATO.

The talks also come as Russia, after its attempted blitz to overtake Ukraine stalled and resulted in much higher than expected casualties, appears to be shifting its efforts to focus on potentially breaking off part of eastern Ukraine.

The Russian military declared Friday that the "first stage of the operation" had been largely accomplished, allowing Russian troops to concentrate on their "top goal — the liberation of Donbas." Donbas, in Ukraine's far east, was controlled by separatist groups ahead of Putin's invasion of Ukraine. And it was part of the first wave of Russia's invasion into Ukrainian territory when Putin launched the invasion last month.

The chief of Ukrainian military intelligence, Kyrylo Budanov, said Sunday the change of focus could reflect Putin’s hope to break Ukraine in two, like North and South Korea, and enforce "a line of separation between the occupied and unoccupied regions."