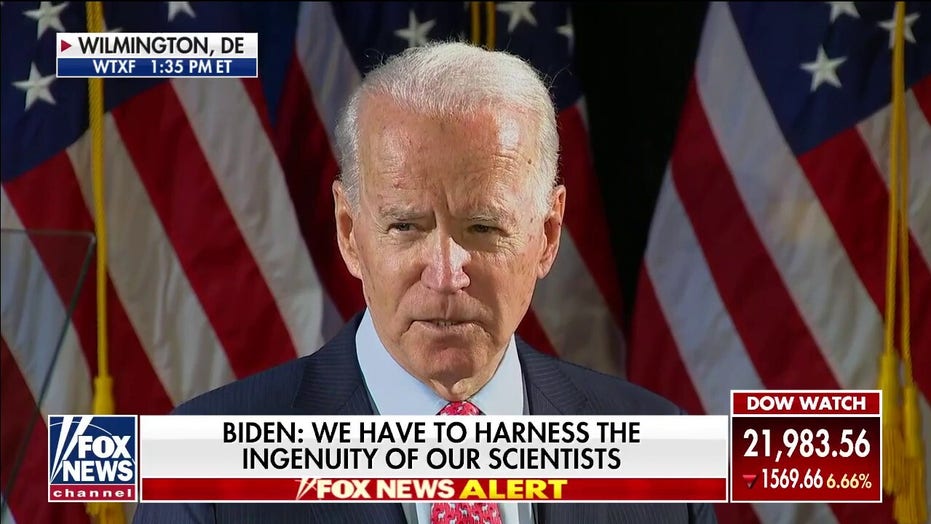 Joe Biden warns of labeling COVID-19 a foreign virus, a virus that originated in China

Joe Biden is shaking up his operation and replacing his Democratic presidential campaign manager as he tries to finish his primary fight with Bernie Sanders to win the Democratic nomination and look ahead to a general election battle ahead with President Trump.

Biden officials said Schultz will now focus on “organizational planning for the general election and continuing to bolster the campaign’s external outreach.”

The move comes as Biden has taken a large lead over Democratic nomination rival Sanders in the crucial race for convention delegates. That's come thanks to major victories in the South Carolina primary and the Super Tuesday states, and this week in Michigan, Missouri, and Mississippi. While Sanders – the populist senator from Vermont – remains in the race, his window to win the nomination is closing fast.

“I am grateful to Greg for his leadership and hard work to help get our campaign where it is today, and I will value his continued input on this campaign,” Biden said in a statement.

But before his rebound in South Carolina, Biden’s White House effort was almost left for dead after disappointing fourth and fifth places finishes in the Iowa caucuses and the New Hampshire primary, the first two contests in the presidential nominating calendar. There’s been grumbling inside and outside the campaign over a lack of resources, organizational issues, and especially disappointing fundraising dating back to last April when Biden announced his candidacy.

Biden praised O’Malley Dillon, saying he’s “thrilled that Jen is bringing her considerable talent and insight to this team. She will be a tremendous asset to a campaign that is only growing and getting stronger as we prepare to take the fight to Donald Trump this fall.”

THE LATEST FOX NEWS REPORTING ON THE 2020 PRESIDENTIAL CAMPAIGN

O’Malley Dillon joined the Biden campaign last month, assisting in the Nevada effort, where Biden started to turn things around with a distant but second-place finish behind Sanders. She served as the battleground states director on Obama’s 2008 campaign, deputy campaign manager on the president’s 2012 re-election effort and was named as Obama’s first executive director at the Democratic National Committee.

“Like so many other Democrats who are unifying behind Joe Biden’s character and leadership, I’m excited to join the team at this critical moment,” O’Malley Dillon said as she spotlighted the tidal wave of support by current and former Democratic federal and state lawmakers the past two weeks as much of the party coalesced around Biden.

Should Biden lock up the nomination, he will face the combined efforts of the Trump re-election and the Republican National Committee, which has a massive financial and organizational advantage over Biden’s campaign and the Democratic National Committee.

A press release from the Biden campaign did not include a statement from Schultz.