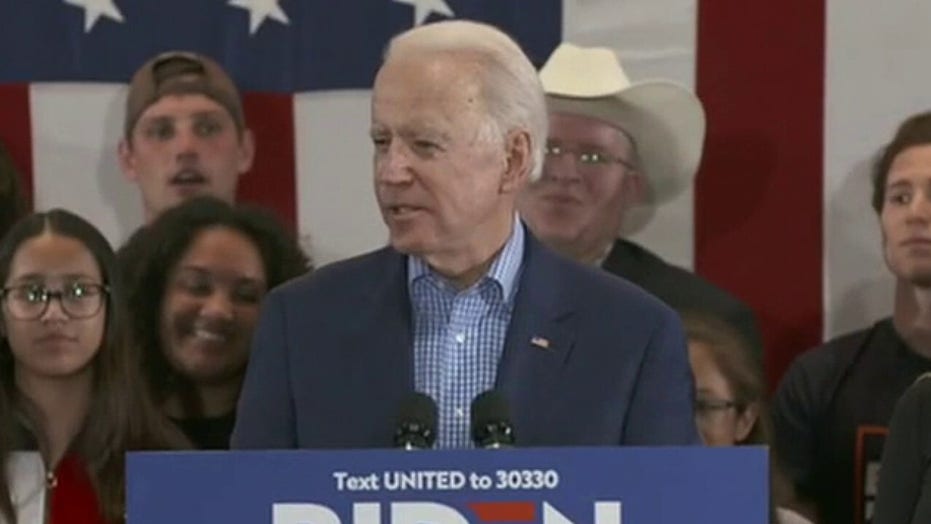 Former Vice President Joe Biden is backing away from pointing to the upcoming South Carolina primary as a virtual lock for his campaign, after previously describing the state as his "firewall."

On Sunday, he pushed back on the description -- and even denied saying it.

BIDEN CLAIMS RUSSIAN BOTS WERE ATTACKING HIM ON FACEBOOK

"You said it, my firewall. I've never said it," Biden shot back at CBS' Margaret Brennan in an interview that aired Sunday on "Face the Nation."

Biden did say it, just a few weeks ago.

In an interview with NBC before the Iowa caucuses, Biden stressed the importance of South Carolina for his campaign.

"I think I'll do well in Nevada," Biden said. "And I think I have a real firewall in South Carolina."

Since making that statement, Biden finished fourth in Iowa, fifth in New Hampshire -- but bounced back with a second-place finish in Nevada.

BIDEN VOWS RESURGENCE AFTER SANDERS' WIN IN NEVADA: 'I'M GOING TO TAKE THIS BACK!'

Biden had been heavily favored heading into the Feb. 29 contest in the Palmetto State. He has touted his support among black voters, but recent polling suggests he is losing ground among that demographic just days before the primary.

"What's happening is you have Steyer spending hundreds of millions, tens of thousands of dollars, millions of dollars, out campaigning there," Biden told Brennan when she noted that recent polling shows him having 35 percent support among black voters, compared with 54 percent in November. "And so I think a lot is happening in terms of the amount of money being spent by the billionaires to try to cut into the African-American vote."

"You all did it for me now, now we go to South Carolina and I’m going to take this back!" he said.