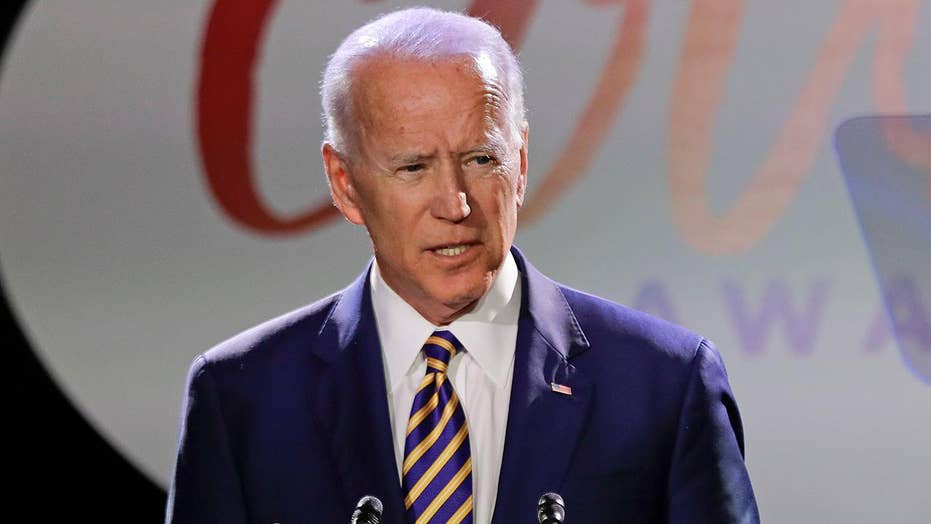 'I regret I couldn't come up with a way to give her the kind of hearing she deserved,' the former Senate Judiciary Committee chairman says of his role in the Clarence Thomas Supreme Court confirmation hearings.

Joe Biden on Tuesday lamented the impact of "white man's culture" and bemoaned his own role in Supreme Court confirmation hearings that undermined Anita Hill's credibility nearly three decades ago.

The former vice president and potential 2020 Democratic candidate said Hill, who is black, should not have been forced to face a panel of "a bunch of white guys" about her sexual harassment allegations against Clarence Thomas.

"To this day I regret I couldn't come up with a way to give her the kind of hearing she deserved," he said Tuesday night, echoing comments he delivered last fall amid debates about sexual misconduct allegations against Brett Kavanaugh during his Supreme Court confirmation process. "I wish I could have done something."

BIDEN REPORTEDLY DEBATES TAPPING STACEY ABRAMS AS RUNNING MATE FROM THE START - COULD IT BACKFIRE?

Biden's role in the 1991 Thomas confirmation hearings is among his many political challenges as he considers making a 2020 bid for the presidency. If he throws his hat into the already-crowded ring, he would be among a handful of white men in a Democratic presidential field that features several women and minorities.

His comments about Hill drew swift condemnation on social media, with many noting he was chairman of the Senate Judiciary Committee at the time of the hearing.

"It literally does not matter what else Biden says about sexual assault if he cannot acknowledge his own culpability in putting a sexual assaulter on the Supreme Court and then pretending for years like he was powerless to stop it," tweeted Jessica Morales Rocketto, a former aide to Hillary Clinton's 2016 presidential campaign who now serves as the political director for the National Domestic Workers Alliance. (Thomas has long denied the accusations.)

"Love you Joe but you were in a position to do better — and you didn't," she said.

Biden, 76, delivered the remarks at a New York City event honoring young people who helped combat sexual assault on college campuses. The event, held at a venue called the Russian Tea Room, was hosted by the Biden Foundation and the nonprofit group It's on Us, which Biden founded with former President Barack Obama in 2014.

Biden called on Americans to "change the culture" that dates back centuries and allows pervasive violence against women. "It's an English jurisprudential culture, a white man's culture. It's got to change," he said.

The former vice president also repeatedly denounced violence against women during his remarks, which spanned more than a half-hour. It's a topic he knows well. As a senator from Delaware, he introduced the Violence Against Women Act in 1990.

"No man has a right to lay a hand on a woman, no matter what she's wearing, she does, who she is, unless it's in self-defense. Never," he said Tuesday.

He then shared a conversation he had with a member of a college fraternity.

"If you see a brother taking an inebriated co-ed up the stairs at a fraternity house and you don't go and stop it, you're a damn coward," Biden said. "You don't deserve to be called a man."