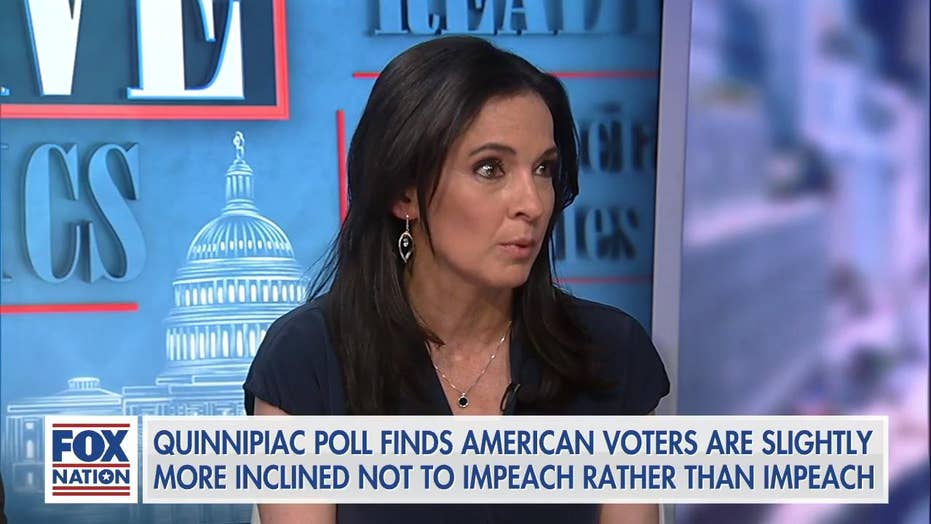 A Trump impeachment would guarantee the president's re-election, according to political expert Jeanne Zaino.

Taking on the party's leadership in a new episode of Fox Nation's "Deep Dive," Zaino called the impeachment push "dangerous" and warned of potential ramifications for Democrats heading into 2020.

"What the Democrats will do is, they will clearly impeach him and he will be acquitted in the Senate. And, I think they do themselves a disservice then, because this will engage his base and energize his base to get out. He will use this, as we've seen him use it in the last few days on the campaign trail," she added.

The House Judiciary Committee became the scene of new partisan fighting Thursday as lawmakers pressed ahead with two articles of impeachment against Trump, as polling indicated a majority of Americans opposed impeaching and removing the president from office.

Zaino expressed opposition to the Democrats' impeachment efforts, although she said she was not fond of Trump.

"People may not like Donald Trump. I am not a big fan of Donald Trump. I don't like a lot of the behavior that he engages in, myself," she said, "and yet we are talking about one of the most serious things that you can do as a member of Congress besides vote for war."

Cautioning against the "dangers" that a Trump impeachment would present, Zaino, a professor of political science and international studies at Iona College, said the historic vote would have an impact not just on the current administration, but on future U.S. presidents as well.

DEMS PLOW AHEAD WITH IMPEACHMENT ARTICLES

"I think it's a real danger for them politically, but more important for me as a political scientist, for the United States as a whole, because I fear when there is not one violation of law mentioned in an impeachment article, that the next president, whoever he or she may be, is going to face the same thing when opponents don't like what they're doing, because we all don't like the president if they're of another party. That's the problem," she explained.

The House has been composed of 431 current members, meaning Democrats would need 217 votes to impeach Trump. There are currently 233 Democrats, so they could lose only 16 of their own and still impeach the president. Among the House Democrats, 31 have represented more moderate districts that Trump carried in 2016.

To watch the full episode of "Deep Dive" featuring the latest in the impeachment probe, visit Fox Nation and sign up today.