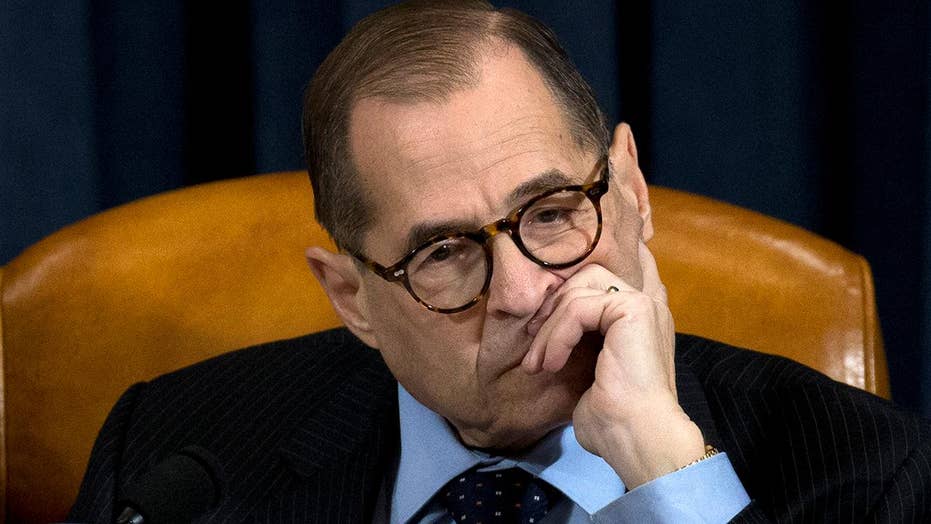 The House Judiciary Committee became the scene of a fresh partisan clash Thursday as lawmakers pressed ahead with two articles of impeachment against President Trump, with majority Democrats turning back a last-ditch bid by Republicans to scrap one of them.

The committee is poised for an initial vote by day's end that would send the articles to the full House for a historically weighty floor vote as early as next week. But first, lawmakers were finalizing the text of the articles during Thursday's all-day session, which became progressively more heated and personal as the afternoon wore on.

Rep. Jim Jordan, R-Ohio, began the debate Thursday by proposing an amendment that would strike the first article of impeachment altogether, claiming the evidence did not support the allegations of abuse of power.

"This amendment strikes article one because article one ignores the truth,” Jordan said. He pointed to the White House memorandum documenting President Trump's July 25 phone call with Ukrainian President Volodymyr Zelensky, claiming it contained no evidence of a quid pro quo related to Ukraine investigating Trump's political opponents. The call is at the heart of the impeachment probe.

"Of course he said he wasn't pressured," Nadler said. "He has a gun to his head."

Nadler's statement came immediately before the Democratic majority then shot down Jordan's amendment by a party-line vote of 23-17.

But Democrats argue that witness testimony shows the administration was linking U.S. aid to the sought-after investigations in other ways. Democratic Rep. Eric Swalwell further claimed that impeachment articles do not have to include statutory crimes because they are not prosecutors -- but that Trump’s actions would satisfy criminal statutes such as bribery.

This led Rep. Louie Gohmert, R-Texas, to retort, “Well then why aren’t they in this impeachment document?!”

The debate took a personal turn after Rep. Matt Gaetz, R-Fla., described allegations of drug use and possession by Hunter Biden, wondering why Ukrainian energy company Burisma Holdings would have someone like him as a board member. Joe Biden's role in the termination of a Ukrainian prosecutor who was investigating Burisma is at the heart of what Trump wanted Ukraine to investigate. Gaetz proposed an amendment to add references to Burisma and Hunter Biden to an impeachment article.

After Gaetz made his detailed statement about Hunter Biden, Rep. Hank Johnson, D-Ga., chided him for "character assassination," while saying, "the pot calling the kettle black is not something that we should do," drawing laughter from the room for what appeared to be a subtle reference to Gaetz's 2008 DUI arrest (the case ended up being dismissed).

Johnson then said that he is not aware of any members of Congress' history of substance abuse or being arrested for DUI, but if he did, "I wouldn't raise it against anyone on this committee, I don't think it's proper."

The final markup process, which began Wednesday evening, kicked off Thursday with a separate clash between Nadler and ranking member Rep. Doug Collins, R-Ga. Collins argued that Nadler violated House rules by refusing to let Republicans hold a minority hearing prior to the markup.

"The chairman was furnished with a demand signed by all Republican members of the committee during the impeachment hearing held on December the Fourth," Collins said. "The chairman has refused to respond to multiple additional requests that that hearing be scheduled, and at one point actually telling me ... that we'll rule on it today. Well, we're here today."

Nadler claimed that the rules do not require him to grant a minority hearing before taking action. Ultimately, the Democrat-controlled committee voted in Nadler's favor.

Rep. Ted Deutch, D-Fla., countered that there “is no right” for the Republican minority to have a separate day of hearings, and that they did have the opportunity to call witnesses during the previous hearings -- which mainly featured Democrat-sought witnesses.

Rep. Debbie Lesko, R-Ariz., blasted Nadler for claiming that it was unnecessary for the minority to hold a hearing before Thursday's vote, stating it would no longer matter afterward.

"It just continues to amaze me how corrupt, how unfair this process has been from the start," she said. Lesko noted that 17 Democratic members of the committee had voted in favor of an impeachment resolution introduced by Rep. Al Green, D-Texas, on separate grounds on July 17.

"That was even before the July 25 call!" Lesko said, arguing "you guys have been wanting to impeach this president since he was elected."

During Wednesday's evening session, Nadler insisted that it was necessary to impeach the president swiftly, prior to November's election.

"We cannot rely on an election to solve our problems when the president threatens the very integrity of that election," Nadler claimed during Wednesday's session.

Democrats from districts that supported Trump in 2016, however, have been less enthusiastic. Recent polls have shown declining support for impeachment in key swing states, with two polls released Wednesday indicating that most Americans did not want Trump removed.

Politico reported earlier this week that the numbers were making a "small group" of moderate Democrats, who have held seats in districts where Trump won in 2016, nervous about how to vote. They instead have suggested Trump be censured, which would prevent the GOP from holding a potentially damaging Senate trial and give them political cover in the upcoming election.

The House is now composed of 431 current members, meaning Democrats would need 217 yeas to impeach Trump. There are currently 233 Democrats, so Democrats could lose only 16 of their own and still impeach the president. Among the House Democrats, 31 represent more moderate districts that Trump carried in 2016.

Freshman Rep. Elissa Slotkin, D-Mich. – who flipped a GOP district in 2018 that Trump won by seven points in 2016 – told Fox News last month that she was tentatively weighing all the evidence. On Wednesday, she confirmed that she's still undecided.

"The phones are ringing off the hook," she told CNN. "We literally can't pick up the phones fast enough -- and it's people on both sides of it."

Republicans, meanwhile, have vociferously opposed the impeachment effort. The committee's ranking member, Collins, stated that Democrats have been trying to impeach Trump since he took office. He echoed the White House's argument that the impeachment was politically motivated theater, long in the works and foreshadowed openly by Democrats for months, if not years.

He and Sensenbrenner each argued that unlike previous presidents who have faced impeachment, Trump was not accused of an offense actually defined by law: neither "abuse of power" nor "obstruction of Congress" is a recognized federal or state crime. Those are the two offenses outlined in the articles of impeachment before the committee. (The separate charge of contempt of Congress, according to the DOJ's Office of Legal Counsel, exempts the president for separation-of-powers reasons.)

The markup is expected to go until Thursday afternoon. If the committee votes to approve the articles of impeachment, as expected, there will likely be an impeachment vote on the House floor in the middle of next week.

The articles center on Trump's efforts to pressure Ukraine to launch an investigation into his political rivals – namely, former vice president Joe Biden – while withholding aid. Democrats argue Trump wrongly used U.S. aid and the prospect of a White House meeting as leverage, but Trump denies doing so.

Fox News' Gregg Re, Chad Pergram and Mike Emanuel contributed to this report.