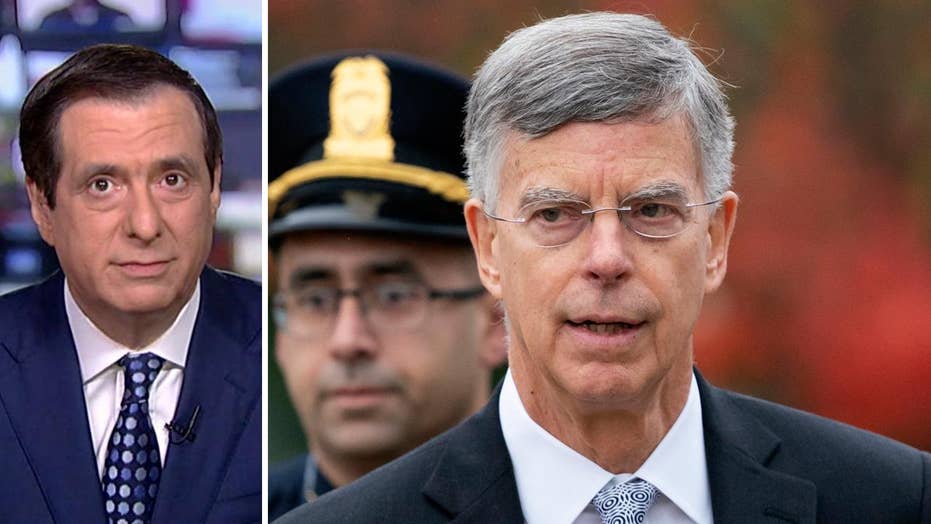 'MediaBuzz' host Howard Kurtz weighs in on why the account by acting ambassador to Ukraine, William Taylor, can't simply be dismissed by the Trump White House.

There are numerous arguments that President Trump and his allies can make against impeachment.

They can say that nothing he did on Ukraine rises to the level of an impeachable offense.

They can argue the Democrats are perverting the process by taking testimony behind closed doors and selectively leaking to the press. (That’s why two dozen GOP congressmen stormed into yesterday’s secure hearing after denouncing it as a “Soviet-style process.”)

They can argue, as the president did, that this is a political “lynching” (and amid the uproar, Joe Biden said he was sorry for using the same word about the 1998 Clinton impeachment).

MEDIA, DEMOCRATS WORRIED ABOUT BEATING TRUMP, PINING FOR A SAVIOR

They can argue, as former acting attorney general Matt Whitaker did with Laura Ingraham, that “abuse of power is not a crime.”

They can argue, as Mick Mulvaney did with Chris Wallace, that politics has always influenced foreign policy.

What they can’t say, at this point, is that nothing happened.

The account by William Taylor, the acting ambassador to Ukraine, made that impossible.

Before we dive into the details, White House press secretary Stephanie Grisham, in her “no quid pro quo” statement, called the effort “a coordinated smear campaign from far-left lawmakers and radical unelected bureaucrats waging war on the Constitution.”

But this particular bureaucrat was retired and reluctant to take the job that Mike Pompeo offered a few months ago. Taylor fought with the 101st Airborne in Vietnam and did stints in Iraq and Afghanistan overseeing reconstruction aid. He has worked for presidents of both parties since Ronald Reagan. George W. Bush made him ambassador to Ukraine 13 years ago. At 72, he had capped a classic career as a foreign service officer.

And we don’t have to rely on Democrats describing what Taylor said, as we have his 14-page opening statement.

What made it so effective is that he recalled standing on one side of a damaged bridge in Ukraine last July, looking at “armed and hostile” Russian-backed separatists and concluding, as Washington held up the military aid, that “more Ukrainians would undoubtedly die without U.S. assistance.”

With those words, as the New York Times put it, Taylor made clear that “the Ukraine scandal also extends to matters of life and death, as well as geopolitics on a grand scale.”

“Taylor was most worried about the betrayal of a desperate ally at the hands of an American president,” said the Washington Post.

Taylor told the House he encountered an “irregular” channel on Ukraine, guided by Rudy Giuliani, that produced “a weird combination of encouraging, confusing, and ultimately alarming circumstances.” Taylor is the guy in those text messages who described the administration’s hold-up of Ukraine aid as “crazy.”

He testified that an OMB official said on a White House conference call, a week before the famous Trump-Zelensky phone conversation, that she could not release the aid to Kiev based on orders that went “from the president to the chief of staff to OMB.”

“I and others sat in astonishment,” Taylor said. “The Ukrainians were fighting the Russians and counted on not only the training and weapons, but also the assurance of U.S. support…In an instant, I realized that one of the key pillars of our strong support for Ukraine was threatened.”

Now it’s true, as White House defenders note, that Taylor didn’t describe a first-hand encounter with Trump, but it’s clear from his testimony who was driving this train.

The president, on Twitter, quoted a Fox interview in which Republican Rep. John Ratcliffe said, “Neither he (Taylor) or any other witness has provided testimony that the Ukrainians were aware that military aid was being withheld. You can’t have a quid pro quo with no quo.”

On that point, the AP reported yesterday that Ukrainian president Zelensky spent a three-hour meeting with advisers back in May talking about how to navigate Giuliani’s insistence on an investigation of American political matters and how to avoid becoming entangled in the 2020 elections.

There is, to be sure, plenty to argue about here, from the details of all the closed-door testimony to whether any of this has the gravity for a third presidential impeachment process in the last four and a half decades. But trashing Bill Taylor, who administration officials recruited to replace the ambassador they fired, makes no sense at all.