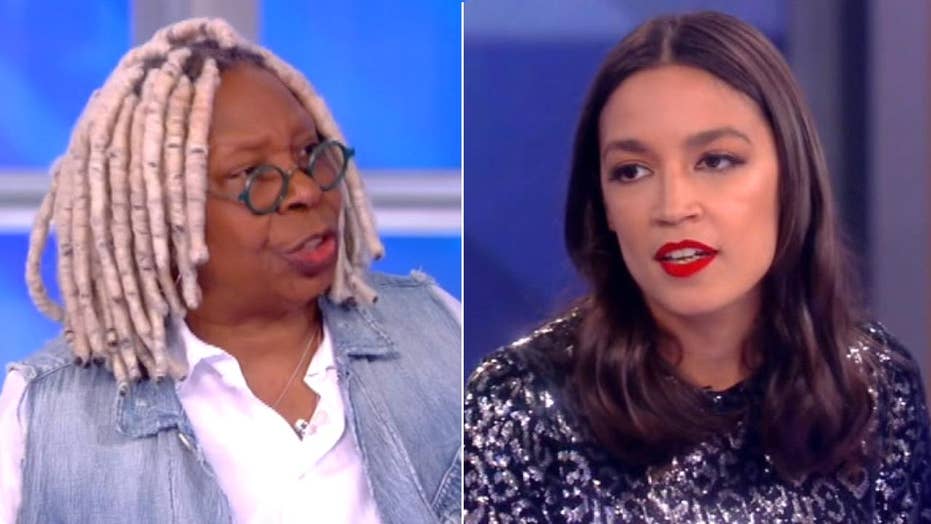 'The View' co-host Whoopi Goldberg expressed concern to Rep. Alexandria Ocasio-Cortez that she had disrespected the influence of older Democratic women.

Rep. Alexandria Ocasio-Cortez, D-N.Y., attempted to quell "The View" co-host Whoopi Goldberg's concerns about her after Goldberg suggested that the congresswoman disrespected the influence of older Democratic women.

"I was very happy when you were elected because I thought it was a great step ... and then you lost me," Goldberg told Ocasio-Cortez, "because it felt like you were saying to people like me that I was too old and didn't do enough."

Ocasio-Cortez quickly jumped in to deny that, but Goldberg continued. "Well, that's what it sounded like and so that has bothered me because I feel like I love young people .. but you're on my shoulders."

"Absolutely," Ocasio-Cortez responded. Goldberg added: "And we have carried this fight." She referred specifically to House Speaker Nancy Pelosi and Sen. Dianne Feinstein, both Democrats from California.

To hear an apparent dismissal from Ocasio-Cortez "bothered the hell out of me," Goldberg said. "And I've been very upset about it for a long time."

Their comments came after a highly-publicized spat between Ocasio-Cortez, her "squad" of progressive freshmen, and Pelosi. Pelosi had downplayed the "squad's" political power after they voted against a bipartisan measure funding immigration enforcement agencies.

Ocasio-Cortez responded by criticizing Pelosi for targeting a group of women of color.

During Wednesday's show, Ocasio-Cortez downplayed the conflict, suggesting that the media tended to exaggerate feuds in the Democratic Party. Pelosi was "Mama Bear of the Democratic Party, you don't mess with her," Ocasio-Cortez said. She also suggested that she faced a substantial amount of pushback because the political system is controlled by "rich men," who were not her priority as a congresswoman.

When the conflict initially surfaced last year, "The View" admonished Ocasio-Cortez for those comments.

"I think this is more BS," Goldberg said after mentioning the race accusation. During that episode from July, Goldberg was annoyed that younger lawmakers were criticizing how effective Pelosi, Feinstein, and other older Democrats had been in effecting change.

She went on to send a message to younger members of Congress: "Please remember that the people who are here now — all you young people, you're on the shoulders of a whole bunch of people who came before you. And you have to stop discounting that."

Co-host Joy Behar expressed grief over the squad's criticism, telling them to focus on getting President Trump out of the White House. "Ladies, ladies. It's like — it's disheartening. It's like the enemy is the guy tweeting in his toilet," Behar said. Like Goldberg, she pushed back on the idea that Pelosi harbored racist sentiments.

"I don't know about going to race right away — it's like really? That's where you go right away? I thought that that was a bit much, frankly."

Goldberg also knocked freshmen for their apparent lack of compromise.

"Women of color, watch me now. Let's keep this in mind, do you think Nancy Pelosi wanted to pass a half-assed bill? No, the moderates were the problem and I would say to these women."

She appeared to be referring to the border funding bill that fueled a lot of the controversy surrounding Ocasio-Cortez and others in the party.

She added that if Ocasio-Cortez and others did not try to reach out and persuade moderates, they shouldn't complain about legislation.