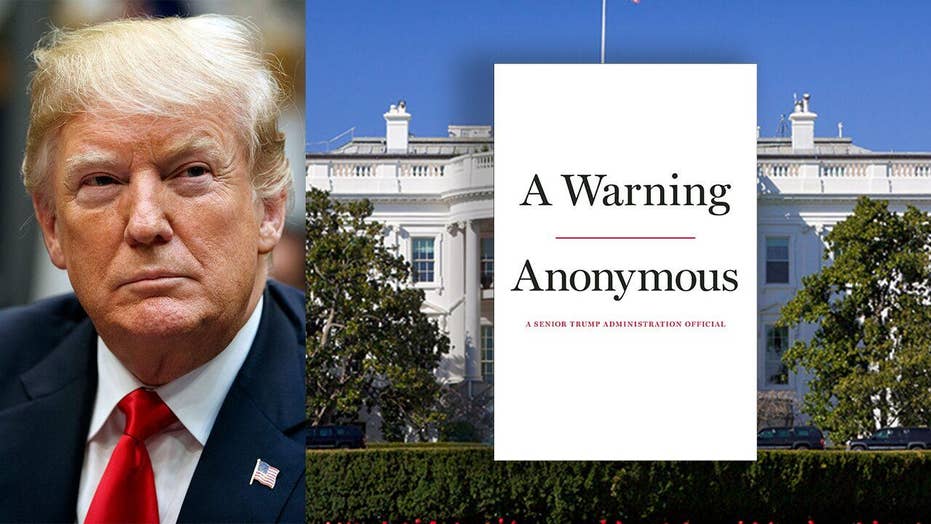 The anonymous White House official behind the explosive 'resistance' op-ed in the New York Times last year is releasing a book. 'A WARNING,' which will be released on Nov. 19, is billed as an 'unprecedented behind-the-scenes portrait of the Trump presidency.'

The White House said it wouldn’t renew subscriptions to The New York Times and The Washington Post on Tuesday after President Trump hinted at the move earlier in the week on Fox News’ “Hannity.”

Trump suggested that he would "probably terminate" both papers during a Monday interview with Sean Hannity, in which he called them "fake."

Press Secretary Stephanie Grisham told Politico on Tuesday that Trump was referring to subscriptions “which we won’t be renewing,” as opposed to terminating reporters from the papers’ access to the White House.

The White House did not immediately respond to a request for additional comment.

"The media is corrupt. Not all media is. Look, I know some, some great people, including you," Trump said to Hannity. "But I know some great journalists. Look, they gave Pulitzer Prizes to people that got it wrong. Okay. All these people for doing it from The New York Times, which is a fake newspaper, we don't even want it in the White House anymore. We're going to probably terminate that and The Washington Post.  They're Fake. But you take a look at The New York Times and you take a look at the kind of reporting they do. It was all -- it turned out to be -- all wrong."

President Trump isn’t a fan of The New York Times or Washington Post.

The president slammed the Times for its coverage of him during the 2016 election and knocked what he described as an "apology" for covering him "so badly" during the sitdown with Hannity.

"After the election, The New York Times apologized for their coverage because they were covering me in such a way. So when I won, they actually apologized to their subscribers because they were losing thousands and thousands of subscribers. The New York Times wrote an apology. Nothing else. You know they're saying, 'well, it wasn't really an apology'," Trump said. "It was because they covered me so badly. And then when I said, sort of interesting, I think I hope I say, you know, the good news is now be covered fairly again."

Trump mocks both papers on a regular basis, often referring to the Times as “failing” and labeling the Post the “Amazon Washington Post” because it is owned by billionaire Amazon founder Jeff Bezos.